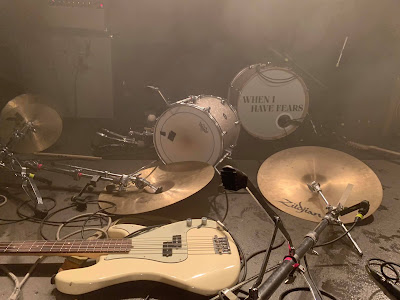 The Murder Capital played their first ever Swiss show and their penultimate date on their mammoth UK and European tour at Lausanne's Le Romandie on Saturday. As incendiary as ever despite the toll of being constantly on the road, the band fired up an initially respectful and reticent crowd into a frenzied moshpit by the end. Support came from the intense local duo Horse I'm Virus.

Horse I'm Virus have brought a crowd with them. They are set up on the floor of the venue rather than on the stage and it's hard to tell whether it's their choice or the venue's, but it feels immediately that Valentin and Serge want to be close to the crowd. Their set-up consists of a table full of technology that Valentin masterfully crafts into dark yet uplifting electronic tracks in which Serge immerses himself.  There's a short burst of a track where he samples Madness's One Step Beyond that shouldn't work but does, and his breathless intoxicating delivery delights their fans and keeps the rest of us glued to what he's going to do next. 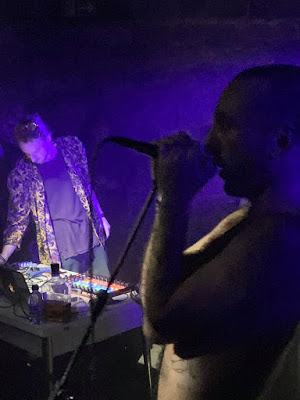 They are even indulged an encore for which Serge strips down to his pants and you think he's going to go the whole hog, but decides against it as their final song heads off into the wild recesses of their creative brains and drags the audience in with it. They might be an acquired taste given their intensity and full-on approach, but they make for an surprising and interesting contrast to the headliner.

As the now familiar strains of Burnt Out's Dear James fade out, the room has filled out to close to capacity, no mean feat for a band on its first European tour, Diarmuid, Damien, Gabe and Cathal make their way onto stage and set into Slow Dance preparing for James' arrival just in time to deliver the song's first line. It's the relative calm before the storm, but the band have already won over the crowd judging by the roar as the instrumental section comes to a close.

The room then drops into silence as James reminds us to tell our friends that we love them and Gabe's opening bass line to On Twisted Ground pierces the air and everyone takes in one of the most vulnerable, fragile and personal songs that's been committed to record this or any other year. The respect is immense for the song, something so beautiful and rare in these days where people love the sound of their own voices. Friends hug each other, hold hands and embrace at the end.

The band appear to have settled on this setlist for some time now and yet it never feels tired or they're going through the motions. The interactions between them are different, one of them will take a part of the song and do something they've not done before every night and the rest of them go with it. The intuitive relationship they have allows them to do this and it feeds the energy and tension in the room perfectly and you feel as the set progresses more and more of those around us being drawn forwards and into their world. 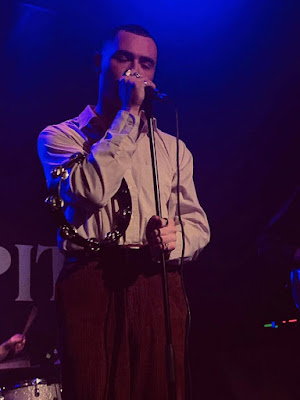 The magic of them is in that, the way they make the audience feel like an extension of the five of them and in how the difficult topics they explore in these songs lead to the euphoric release of realisation that others are in the same place and can bravely address them so publicly and in such detail every night. It's all part of a healing process, a coming together, an instruction that to talk about the really bad, dark stuff that's going on is the best way to deal with it. For everything, for nothing might be their mantra, The Murder Capital are a band to immerse yourself into completely and as the mosh pit grows then the symbiotic relationship between them and us morphs into something truly life-affirming.

James ends up amongst us, crudely held up, dropped, hugged, lifted back up as he seeks to deepen the connection as they reach the end of the set and send their instruments flying around the stage. For other bands it might feel like a cliche, but here it feels like the perfect finale to the night, the final exhumation of the pent-up energy that sits at the core of this band and which is released by their performances. There's plenty of comparisons made about them because of geography and who they've supported, but they're all irrelevant. The Murder Capital are a genuine one-off.