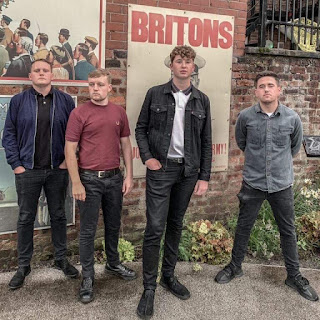 Urban Theory released their first single of 2019 Living The Dream But Discussing The Nightmare after a break which saw line-up changes and a refocusing of the band. After a recent successful support with Jordan Allen at Gorilla, they headline their own show at Off The Square in Manchester this Saturday (November 9). We caught up with Alex to chat about everything that's gone on and their plans after the show.

Since we last spoke you’ve had some time out and changed the line up of Urban Theory. Could you explain what happened and the new line up?

In the summer, we parted ways with our last bassist James. which wasn't easy as James had been a large part of the band for a long time. However due to differences in the musical part of the band James left in June.

Our new bassist Josh Rowlands had been a fan of the band for some time and use to come to all the gigs. Josh even opened for us at a lot of local gigs playing acoustically. When we were looking for a bassist Josh said straight away that he wanted to be part of it. From there Josh has fitted in really well and is bringing in a new dimension to the band bringing different ideas we have never had before in the writing of our music.

It certainly felt during your set at Gorilla that you’ve upped your game in the time you’ve been away. Have you changed the way in which you approach the band and live shows?

We have sat back and analysed performances in the past, we now believe that our sets need to impact people from the start and carry on keeping a fast pace, almost like our previous sets. We are now trying to bring a more mature feeling to the set by bridging songs as well as making the set flow with dynamics of the music. We have recently wrote a slow song which is a first for us; this brings the dynamic of the set down and gives the set more feeling and intimacy before bringing back the fast heavy paced music we are known for.

You’ve written a raft of new songs including Living The Dream But Discussing The Nightmare. How has your songwriting process changed with the new line-up?

It hasn’t changed dramatically, but there are elements that have been tweaked. I still write most of the lyrics, however we try to write as much of the music together. Once an idea has been brought to the table by one of the members we usually sit in our studio and jam it out, but sometimes one of the members has a clear idea of the song which is then passed onto the rest of the band.

What is Living The Dream But Discussing The Nightmare about?

The meaning of the song really is up to the listeners, it started of with the idea of seduction and temptation from the different things in life, obviously it had ideas from personal experiences, but we want to keep them ideas mysterious and to ourselves as we don’t want to give too much away

One of the songs you played at Gorilla was introduced as a political song, something we’d not heard from you before. Is that something you plan to talk about more?

No chance, it’s something that is a sticky subject and there are plenty of other bands voicing political opinions, so we’ll leave that to them to talk about. Once again the song has many meanings to everyone but yeah, politics is one we aren’t ready for yet.

You’ve released a number of singles now. Are you planning to move on to a bigger body of work like an EP or an album?

Yes, definitely it’s on the cards, however this would be an EP, we aren’t rich enough to do an album. Like you say we have now released four singles so on the back of the new release we aim to give people something special to talk about.

You’re headlining Off The Square this Saturday. What can we expect from the set?

You guys can expect a set packed with punch, emotion, movement and hard work from the last few months, we hope everyone loves the new set and everyone gets behind it, the last year hasn’t been easy but we are back now and we want to get to off on a high, we are buzzing to see everyone as the fans mean everything to us, we can’t wait for this one!

Are you planning to play dates outside of Manchester in the near future?

Yes, definitely we are looking all time and waiting for the right offers, we feel that we need to get out of Manchester more, and play across the country, we had a couple before summer however it isn’t enough for us, playing music is all want to do.

If we fast-forwarded to the end of 2020 where would you like Urban Theory to be?

God knows, hopefully we will have released more music, played a couple festivals, played further afield and maybe get some bigger opportunities supporting larger bands and playing larger venues. However, in music you never know what’s around the corner, we as a band are taking things step by step growing naturally, waiting for the right opportunities to come along.

Urban Theory are on Facebook and Twitter. They play Manchester Off The Square (November 9) - tickets are available here.