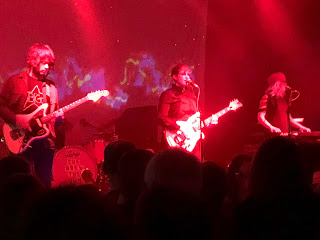 She Drew The Gun's UK tour called in at a close-to-capacity Manchester Academy 2 on Wednesday night for an inspirational show pulling from both the Memories Of Another Future and Revolution Of Mind albums as well as new material. Support came from Peaness and Natalie McCool.

Things seem to be happening for Natalie McCool all of a sudden. Two albums in and a third close to completion or already complete, she has an SXSW invitation in hand for next year, and it's really about time. Whether she's performing with her band, or, as she does tonight, solo with just a guitar, effects pedal and two microphones to accompany her, what always shines through is the strength and emotional clarity of her songs. 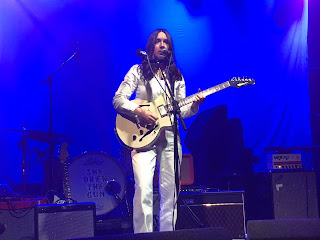 Whilst many might get lost in this big space the songs grow and fill the room - both recent singles Someone Nue and Woman's World feel invigorated by their new surroundings and alternative arrangements whilst older tracks Dig It Out and the set-closing Fortress feel emboldened by her. She reveals two new songs - Devils and Better - from her forthcoming record that show a development in her songwriting without losing the qualities that have enabled to her to maintain an audience that has given her time to grow. Hopefully 2020 will see her get the recognition she deserves.

It's eighteen months since we last saw Peaness and it feels like we're watching a different band. Where once the thrill was in the way they held everything together somehow when it felt it was going to collapse, now they've tight, polished, have harmonies to die for and yet have managed to do all this without diluting any of that charm that drew people in at the start. Older songs like Seaform Islands, Oh George and Same Place which go back to their 2017 EP Are You Sure feel bulked out yet still able to raise a wry smile as their hook lines and melodies are still razor sharp. 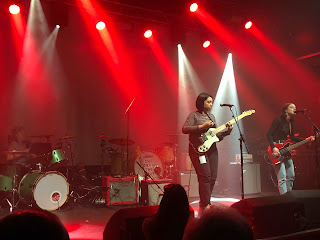 Recent single Breakfast, written about Brexit, and the unreleased What's The Use show that they've got plenty more in their locker in terms of new material - and that they're adopting an approach of revealing it slowly when they're ready rather than throwing out all the older material. It gives the set a really nice balance of the familiar and the still to come - and hope that they might yet become the next big name in jangly-guitared indie songs that twist themselves round your brain and don't let go.

She Drew The Gun has developed from the shy nervous debutant of If You Could See, which still retains its space in the setlist, into one of the most vocal, intelligent and thoughtful critics of conservative society, particularly on tracks from last year's Revolution Of Mind which make up half of the eighteen original tracks they perform tonight. With recent single Trouble Every Day and new songs Russian Doll and an acoustic Hallow's Eve (the song has appeared on Spotify overnight) complementing tracks from Memories Of Another Future and the two contrasting covers of Malvina Reynolds' No Hole In My Head and The Beloved's Sweet Harmony, it's a setlist that's impressive in its depth and variety and one that never wavers in its quality.

Louisa is pissed off at the state of the world and the way in which the less well-off are treated in it. On Paradise, Pit Pony and Poem she rails against injustice, but does it with a sense of purpose, controlled anger and directed well-observed criticism that makes it bite and hit home rather than the empty echo-chamber sloganeering than isn't going to change anyone's viewpoint that makes up the majority of supposed political discourse in this country and further afield. The power of this is equally in the words as it is the delivery - and the attentive Manchester audience shut up and listen.

The band around her are impressive. They allow the subtler moments in the set - like the forever endearing conversation with the drunken self Where I End And You Begin and the maudlin Since You Were Not Mine - space to breathe and retain the innocent qualities that first drew many to the band. But when the rope needs to be tightened and the songs need to hammer home the message then Jim, Jack, Joe and Lucy really come to the fore providing the robust structures that hold Louisa's messages firmly and give them additional impetus. 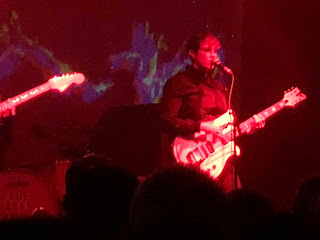 It isn't just about spreading a message though - Resister Reprise brings in audience participation and Poem, once a delicate fragile critique of the way people look down their nose at those less fortunate, has been fleshed out and builds slowly into something that could fill stadiums let alone university halls and still lose nothing in that translation. It's a rare quality to have.

Thank You in the encore recalls all the inspirations that have set Louisa on to the path she's found herself on, and without whom she might not have had the strength to come to where she has. You could well imagine how she inspires young women to take up music and believe in themselves - and it's noticeable the gender mix of the crowd is much more balanced than your average Manchester audience for an artist championed heavily by 6 Music and the like. The final song is a cover of The Beloved's Sweet Harmony, Louisa telling us we need to "shake our bootys" like Mancunians know how to as they take the song and make it their own and showing us a different side again to She Drew The Gun.

It's a genuinely magical ninety minute set of everything a gig should be about - a passion and belief running through the performance, a sense of humour to keep things balanced, thought-provoking, entertaining, visually exciting and possessing an ability to move from light to dark and have plenty of shades and nuance in between. There isn't anyone quite like She Drew The Gun out there right now - and in our troubled times tonight proves that heroines don't need to wear capes if they've got a guitar and a microphone.

She Drew The Gun played Resister, Something For The Pain, Where I End And You Begin, Wolf And Bird, Since You Were Not Mine, Between Stars, If You Could See, Arm Yourself, Ocean Song, Paradise, Trouble Every Day, Revolution Of Mind, Russian Doll, Pit Pony, Resister Reprise, Poem, No Hole In My Head, Hallow's Eve, Thank You and Sweet Harmony.

Natalie McCool's official site can be found here and she is also on Facebook and Twitter.  She plays Liverpool East Village Arts Club on December 14 before heading to SXSW in Texas next March.

Email ThisBlogThis!Share to TwitterShare to FacebookShare to Pinterest
Labels: Natalie McCool, Peaness, She Drew The Gun