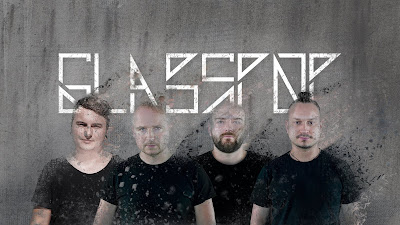 Describing themselves as "Modern Synth Alternative Rock" Glasspop are returning to the UK from their native Poland to play at this year's Lancaster Music Festival and then their first ever UK headline show at Manchester's Peer Hat on October 13. We caught up with front man Marcin “Maverick” Kujawa to talk about the band, Polish music and their love of British music.

Could you introduce Glasspop and tell us a little about how you became a band?

The beginning of the story is a band called UFly. It was my only band since the beginning of my musical journey. I had never played in other bands because I wanted to be honest with myself and my band mates and put all the strength as a composer and lyric-writer into one band only.

Piotr joined UFly for the last two years of its activity. I was the main composer in the band and at the some moment it turned out that my new songs were not the musical direction which the guitarist and drummer wanted to follow. So frustration, resentment and lack of involvement grew in the band. Each rehearsal was like a torture for each of us so finally decided to take a break.

I didn’t know what to do. I was completely shattered. Piotr convinced me that my new material was good enough to start something new. I really wasn’t sure. I felt that I was not a teenager who could easily start to build a band from the beginning, but from the other hand I knew that after some time I would regret it if I didn’t give it a try. So I decided to go for it. In April 2016 me and Piotr formed Glasspop.

After UFly I was really tired of comments from band mates who told me how I suppose to sing, what I suppose to write, how I suppose to look on the stage...I wanted to be honest with myself and with the people. I was looking for a name that would emphasize purity and transparency. Glass was my first association....Then I simply started to google some word variations wrote down a few ideas on the paper and then together with Piotr choose the best name. I’ve always said that the best name for a band is a word which is unique and doesn’t exist. I think we’ve got it.

What’s the music scene like in Poland? How easy it for you to build an audience, play regular shows and release records?

I think that Polish scene is very polarized. There are a lot of bands who are struggle for fifty to  a hundred people at a gig and on the other side you’ve got artist who sell out stadiums in ten minutes. There is almost nothing in the middle. I’d have to think really hard to find 5 bands who could easily bring 300-400 people to a gig.

As regards mainstream media I think it’s the same as everywhere. Pop rules on the charts, hip hop rules on YouTube, big stations prefer to play classic hits and there are just a few stations (student mostly) which can give new bands airplay. Of course you can be playlisted in smaller radio stations but in fact, it doesn’t have much impact on band’s situation.

I think that direct connecting with potential fans using social media and streaming services is the most powerful tool. We’ve decided to simplify the booking and recording process. We do not bother with bookers, promoters or record labels. We do all the stuff ourselves and speak directly to venues, festival organizers, producers.

During all these years I noticed that a lot of people who promise to connect you with the right people want your money first but cannot give you a guarantee that they will bring any positive result. So what’s the point to spend money on them? The people who are the most dedicated to your band is you.

Of course it doesn’t mean that we are not open to speak to people from the music business. I believe that there are honest people which can really help. We just do not invest our time in finding them.

You’re playing the Lancaster Music Festival this month for the second time. Could you tell us how that came about?

That was an incredible story. Could you believe that Polish band who formed in April, in October would play their first gigs ever in UK? I used to play the Lancaster Music Festival with my previous band - UFly. Since then I have pretty good relations with one of the festival organizers. I wrote him saying that I had formed a new band and that we’d love to come to the festival. He invited us in 2016. We made a really good impression and they said they wanted us on the festival’s 10th anniversary. They kept the promise and here we are in 2019.

You’re also playing Manchester on October 13. Do you feel a special affinity for the city and its musical heritage?

Oh yes! There are so many emotions that bubbling away inside us! It’s our first headline show ever in the UK. We are soooo excited about that. It’s gonna be an incredible night - we’ve got fantastic guests as well in Methods and Husk.

Of course we feel this musical heritage and it gives us a huge extra thrill. I don’t know why but I feel that in the UK rock’n’roll is sprayed in the air. So many incredible bands and artists are from here...  You may say that right now it’s different and people prefer to go to a club instead of a rock gig. But from the other hand young bands like Nothing But Thieves or The Amazons prove that there’s lots of great music now.

You released an album Stranger In The Mirror last year. How was the response to that?

People in Poland think that we are a UK band and people in UK or Germany doesn’t believe that we are from Poland…We had a funny situation when we played support for Mew in Poland. After the first song I said (in Polish of course) “Hello, we are Glasspop, so nice to see you.” After the performance a group of people came up to me and said their first reaction was "Wow, this vocalist speaks polish so perfectly." They said they were sure that we were from UK or Scandinavia, they couldn’t believe that we are from Poland. We did it very consciously and worked on that album with Neil Treppas - a UK producer based near Manchester. We wanted to get some British sound. Looks like Neil did a very good job.

The album got really good reviews in the Polish and German press. The singles got national airplay in Poland and also in some smaller stations in Germany and UK. We do not have a big promo machine behind us so still work on promotion ourselves. We are very proud of our debut and want to make the most of this album's potential. I think that our growing Spotify and social media stats are the best proof.

And have you written new music since and, if so, how does it sound?

Yes, we have. We plan to work on the new material from the middle of October, record two or three songs in December and release new singles from January 2020. We plan to release a full album by the end of the next year.

It’s hard to say how it’s gonna sound...Of course we won’t play jazz and it will still be a mix of rock and synth sounds. I really like the way we work on the new songs. I record in my home studio a rough version of each song and then we work on it together on the rehearsals. Sometimes the final version is quite similar to my home recording but sometimes the song is completely different. I love it because you never know where you are going to end up. I think that music must allow you to discover the undiscovered - if you know what I mean/ You must have an open mind towards a different view and then it could lead you to the great things.

If you asked me what kind of sound I would like to get...I would say more guitar based, a bit more minimal...I’d like to catch the live sound of Glasspop. Sometimes people say that on album we sound more like a synthpop band. After the gig they have no doubt that we are pure rock’n’roll band. I’d like that kind of sound on the next album.

How would you describe your music to someone who had never heard of you before?

It’s very real and honest music. We do not pretend to be anyone else, do not try to sound like someone else. We try to define rock music in our very own way - without barriers, without any limits, without any rules. It’s music which can become a friend and a part of your life, which will be by your side when you’re happy but also when you struggle with things that overwhelm you. It’s music for those who have a crazy party in the first rows, but also for those who stand still in the dark corner of the venue. This is Glasspop.

I know that there are people who like to classify music into a specific genre... and they may be unsatisfied with my answer. Here you go: we also call it Modern Synth Alternative Rock. Definitely worth taking a chance on.

Tickets for the Manchester show are available here.

Email ThisBlogThis!Share to TwitterShare to FacebookShare to Pinterest
Labels: Glasspop