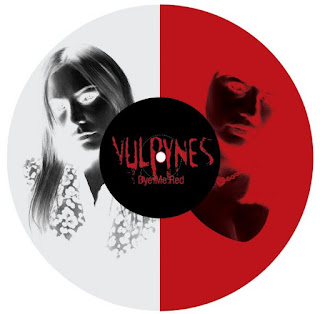 Dye Me Red is Vulpynes’ second EP, the follow-up to last year’s self-titled debut from the Dublin duo. Like on its predecessor, Vulpynes trade in huge heavy hook-laden songs layered with earworm melodies.

The EP opens with I Can’t Stand Still and from the very start Vulpynes show they mean business. Drums and guitars are fused together to create a steamroller of a beat that runs through the song on which they load guitar riffs that create the feeling of restlessness that mirrors the song’s title and lyrics. It’s cleverly done, raw and natural.

Bitches Are Like Waves starts big and bold and continues relentlessly in that vein, barely pausing for breath. Rightly chosen as the lead single from the EP, it’s direct musically and pulls no punches lyrically as Molly declares “bitches are like waves, they throw themselves at you” in the chorus.

It Washes Out gives the EP its title. Less full on from the offset, it features fuzzy guitars circling the drums and is more loosely structured than what’s gone before without losing its impact. That restlessness is mirrored in the chorus lyrics which declare “I’m running but standing in the same place, pretending to get off just to save face.”

The Hunt completes the EP, announcing itself in a frenzy of drums, claustrophobic in their intensity, and with Molly threatening to rip apart anyone who gets in her path demanding the answer to the question - “look into these eyes, tell me what you see, see, see.” It’s simple in its execution, relying on sheer force rather than trying to be too clever, but its impact is devastating.

Dye Me Red follows up on the promise of the debut, retaining much of what made it so great but feeling more direct, focused and targeted at the songs’ subject matters. It might be no fuss and no thrills but it’s all the better for it.

Email ThisBlogThis!Share to TwitterShare to FacebookShare to Pinterest
Labels: Vulpynes