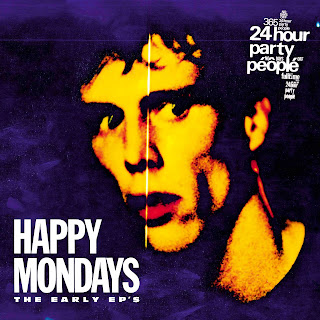 Salford legends Happy Mondays have just embarked on a massive greatest hits tour. To celebrate, they are reissuing their first four 12" singles as a box set. Long term Mondays and Factory fan Stuart Ralston takes a look back at some classic and often overlooked tracks.

Factory reissue are always welcomed by me. In recent years, we have seen some excellent vinyl reissues from Stockholm Monsters and Section 25, as well as new pressings from Joy Division and box sets from New Order are currently in production. The Factory band influenced, nurtured or encouraged by all of the above, Happy Mondays, are the latest to receive the reissue treatment.

To the average music fan, Happy Mondays, and in particular Shaun and Bez, are almost more famous for their notoriety than their music. Among their many documented antics have been their roles as guest editors at top shelf men's mag Penthouse, hanging about with great train robber Ronnie Biggs, Shaun being banned from Channel 4 for persistent swearing on TFI Friday and the small matter of introducing E to Manchester. There's so much more to them than that though as this early eleven track retrospective demonstrates.

The Forty Five EP, produced by Mike Pickering, was their debut release. Lead track Delightful, a fabulously funky upbeat number featured on a demo tape which won the band favour with all at Factory, including Tony Wilson and Rob Gretton. In typical Factory style, all tracks across the ep were as equally appealing. This Feeling featured a storming bass line from Shaun's brother Paul - an incredible bass player whose love of funk and Northern Soul shone through. Meanwhile drummer Gaz Whelan complimented Ryder's bass perfectly and guitarist Mark Day was already producing some incredibly fluid, funky, wah wah sounds on his guitar. The promising debut was concluded by Oasis, and demonstrates what a tight unit the Mondays were even at this early stage in their career. Never afraid to borrow from others (Desmond and Lazyitis being the most cited examples), on Oasis, Shaun briefly borrows from The Tom Jones hit It's Not Unusual.

Follow up single Freaky Dancin' was even better than the debut. Interestingly, the track was recorded live. The wah wah pedals were turned to the max as New Order's Bernard Summer was in the producer's chair for this instalment. Probably the first classic Mondays song, it still sounds fresh today, which might come as a surprise given that in the account documented in the famous Factory bio-pic, 24 Hour Party People, the Mondays are portrayed as if they don't know what is happening in the studio and Sumner appears bemused! B-side The Egg has been given a new video to support the release of the box set and is something of a forgotten nugget in the Mondays' canon.

With a few well received singles under their belt and support slots with idols New Order (the band basing their name from New Order's biggest hit Blue Monday), the Mondays and Factory turned their attention to an album. Wanting a big name producer, all parties were delighted to get John Cale of The Velvet Underground on board. However, Cale famously didn't understand what the Mondays were saying or playing. That they all managed to deliver an album was minor miracle.  Lead single to support the album was the glorious Tart Tart. Shaun Ryder wrote about what he knew and Tart Tart was about a character the band knew from The Hacienda. On Tart Tart, Cale somehow managed to capture a harder edge to the Mondays yet retaining the gloriously uplifting funk of their earlier material. Shaun's vocals are more direct and commanding than before. The b-side, Little Matchstick Owen's Rap is a bit of a departure and featured sound engineer Mike Bleach rapping. It sounds a bit like a forerunner to MC Tunes and for me doesn't really work.

By the time of their forth single (and the second taken from the album of the same name), the Mondays had really found their feet and 24 Hour Party People is an absolute classic. Another real team performance, Paul's bass is almost played as a lead instrument and Paul Davies augments well on keyboards. Day's wah wah pedal is again used to full effect. Whereas 24 Hour Party People was driven, flip sides Yahoo and Wah Wah (Think Tank) almost sound like a freeform studio jams, with more than just a hint of Northern Soul from the incredible rhythm section.

And that was the opening quartet from Happy Mondays. four timeless singles and some strong b-sides, all housed in sleeves designed by Central Station Design (The Ryder's Cousins, Matt and Pat Carroll). Happy Mondays records are rarely far from my turntable. Second album Bummed and lead single from that Wrote For Luck are among my most played records and have been for the most of the last 30 years. These earlier cuts reissued here are essential for any fan of the band, ahead of planned reissues of their four studio albums on vinyl, and the remastered versions here sound glorious.