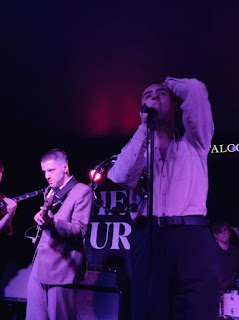 The Murder Capital's sold out tour rolled into Birmingham's Castle And Falcon on Saturday night for a hot and sweaty show that built in intensity as it progressed with an inordinate amount of love in the room for the most exhilarating band around at the moment. Support came from Brighton's Happy Couple.

It's our first visit to the Castle And Falcon, located somewhere on the outskirts of Birmingham that we'd never find again without a taxi. A pub at the front that only opens up an hour or so before doors, but the staff were kind enough to allow us in early, it has a real friendly feel to it (they trust us with glass glasses in the gig room) and great sound and sightlines. 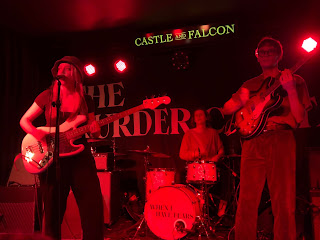 Happy Couple open up as they are doing across that tour and they are very much a band that seduces you a little bit more each time you see them. They have an air of mystery to them, saying very little other than asking for adjustments to the sound, but it's their music that very much does their talking for them. Lena's voice drifts under and then over the waves of guitars and drums. It creates a vacuum effect that sucks your attention towards the stage and then holds you there. Everything feels like it's there for a reason, with an intent to lure you into their web and entangle you in and they succeed with an attentive audience that falls under their spell.

Attentiveness is a prerequisite for The Murder Capital. There will come a day where we find ourselves in big halls with them where the curious outnumber the devoted and that will become a problem. Yet tonight it feels like we are one unit together, two hundred and fifty or so on the floor and five on stage, although the demarcation lines are invisible ones once the music starts, we have our first crowd-surfer who James orders us to "hold her up" and later James makes two forays out to be lifted up above us on shoulders that will be feeling the pain this morning alongside James' tambourine-scarred hand.

They start with the two-part Slow Dance, preferring to open up this communal celebration of love and friendship in the face of emotional adversity and the battle against doubt and insecurity with something more soothing than the full-on adrenaline rush that's to come later. Every Murder Capital show is different, each time they play a song they seek to discover new things about it (check out their radio sessions around the album launch if you don't believe us) and this makes their live shows even more intoxicating. As it moves into the instrumental second part, James one hand in pocket, the other tapping his tambourine against his leg surveys us without a flicker of emotion on his face, lost in the moment like the rest of us.

On Twisted Ground feels particularly poignant tonight, James says something off mic to the rest of the band and then says hello to seemingly everyone in his eye line individually before telling us that the rest of the band are his best friends and he wouldn't be able to do anything without them. It's a message more people would do well to heed. There's almost silence, no leery shouts, just complete respect for them opening up their world for us to listen, learn and relate to our own and how the ability to address the darkest moments with sometimes complete strangers is one of the most powerful tools of healing there is. No matter how many times we hear this song played live, it never fails to have a devastating effect. 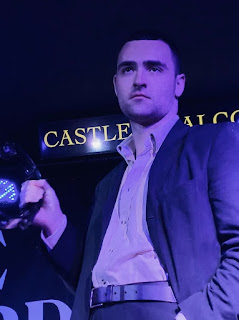 The final six songs are a blur as we're in the middle of the moshpit, making friends with people we've never met and might never do again, but joined for forty-minutes in the heat and intensity of the gig. James shouts "LOVE" into the mic as the opening bars of Love Love Love kick in and asks us if we are alive at the start of For Everything.

We jump together, dance together, sing every word of these songs that come from a dark place but which end up being a (drunken) pressure valve that allows us to let off steam, to feel like that weight of the world that sometimes lands on our shoulders (as James does later) is made lighter by sharing the load and passing it around. It's something that the band have internalised and which when the guitars kick in, the effects pedals wreak havoc, Cathal, Gabe and Damien prowl around the stage to face off to each other and James barks what feels like a manifesto for living and loving at us, it feels like this is the best reason for being alive.

It's the first time we've witnessed him stop singing on For Everything and let us take over, causing him to tell us we are alive. This may give us a pointer as to what may happen when they step up venues in the New Year. Tonight it feels totally natural, something that was done on the spur of the moment rather than planned. There's little pieces of improvisation, moments where they wait for James to compose himself or to survey the bodies in front of him and then they surge again.

There's also lighter moments where as James muses "Saturday Saturday Saturday" as the crowd gets wilder and a woman shouts that she loves him more than anything before he replies that "I don't think you'd say that after a few days" keeping a straight face as he does.

They finish with Feeling Fades and after bidding everyone from the back to move forward, he puts his life in our hands and jumps over our heads, lifted up, planted back on stage and then out again almost garrotting one of the front row in the process. However chaotic it all feels, the overwhelming sensation is one of love from audience to band and reflected back as the final strains of the song die down, the screeching sound of the effects pedals linger and the house lights come back up.

This is exactly what live music should be; an escape from the horrible things that are going on in the world, either universally or in your head, a coming together of like-minded individuals who can relate to what the band have to impart to us and an opportunity to lose yourself in the love that's at the very core of the words and the music, its creation, its intent and its bonding and healing qualities.