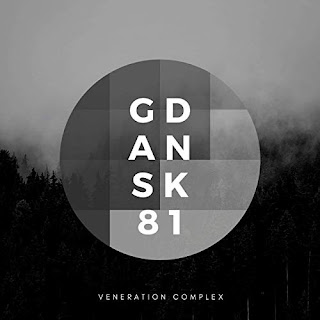 Gdansk81 describe themselves as “post punk underdogs from the rainy city.” What they bring on their Veneration Complex EP is an approach that’s rare amongst bands who identify with that genre. Across the three songs they intersperse male and female vocals - with Macker and Claire either taking the lead or combining in call and response - to create something that feels unique in this space.

The EP starts with Toy, a song that lasts just over three minutes but which feels so much longer because there’s so much going on. It starts with Claire on lead, an urgent undercurrent of bass that kicks the whole thing off, half-sung half-shouted vocals before the guitars kick in with the drums creating a real energy with a pounding persistent beat underlying it all. It ends unrecognisable from its start with Macker asking the question “is it too real for you?” before disappearing in a whirlwind of distortion with Claire’s indiscernible vocals hidden deep in the mix.

Hollowspell sees them widening their horizons a little, there’s a lot of space in the forty seconds before Macker’s vocals come in, aided by an unfussy production. It feels warmly familiar without you ever being able to point as to where you’ve heard it before - the sign of a band that can take their influences and fuse them into something that’s their own sound. It paints a picture of a doomed romance set in the bleak location of a South Manchester flat with a sense of still believing in the magic of love running through it, particularly when Claire’s vocals come in and the two of them combine.

Ghosts has a more dramatic feel to it, Macker’s vocals reminiscing about the past into the present ("you were my teenage obsession" moving to "you are my midlife obsession") and coming the conclusion that he repeats at the end that “we all have our ghosts” delivered with both a resigned feel to them haunting him for ever, but with a sense of coming to terms and having to deal with it.

Gdansk81 are another of those bands operating outside the self-proclaimed cool spectrum of the Manchester music scene, producing great music that nods to the city’s past, but which feel contemporary and vibrant today with the emphasis on substance over style. Post-punk is a convenient label for them, but there’s a richness and depth to Veneration Complex that deserves further investigation to reveal something more melodic with a vision and approach of their own.

Email ThisBlogThis!Share to TwitterShare to FacebookShare to Pinterest
Labels: Gdansk 81