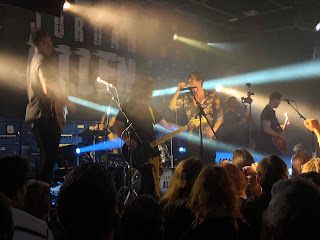 Jordan Allen's big comeback gig and biggest ever headline show to date at Manchester Gorilla sold out a couple of months in advance. The anticipation in the room was intense before he and his new band delivered a breathless fifty-minute set that never paused for breath and left both Jordan and his loyal crowd exhausted by the end. Support came from Urban Theory and Scuttlers.

Urban Theory have been doing some reorganisation of their own recently, changing line-up and spending time away to write new songs, a number of which they introduce tonight and on the basis of tonight's performance it's been time well-spent. There's a new energy to them yet where once they were once propelled themselves forward at breakneck speed, it feels they've eased off the accelerator pedal just enough to be able to appreciate the songs without losing the fast and furious nature of older songs like Weekend Offender, Mandy and Fishbowls and Headfuckers. 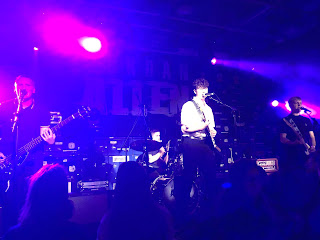 It's their new material that impresses most though. Their next single Living The Dream But Discussing The Nightmare doesn't just have a great title, it'll be their best single so far when it's released next week. There's much more - The Unknown, Dirty Faces and A Poet's World ("about politics, which is all fucked up") and their set-closer A To B suggest they've spent their time away wisely, working out what they want Urban Theory to be and now they're revitalised, chomping at the bit and with nights like this with them at the top of the bill their target.

Scuttlers take the main support slot on the night and by the end of their well-received set they've got a crowd circle of their own forming as the crowd react to their final song Lies In The Sky. That reaction has built though during the set as the room fills out with late arrivals and songs like Noone Knows The Way and Bringin' Me Down from their debut EP as well as their most recent single There's Nothing New set people's feet moving. Scuttlers might not write pop songs, but there's something about them that grabs you and draws you in, a hook line or a melody, played with impressive technique and a dual-play in vocals between Liam and Kaiden. 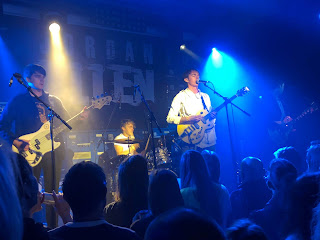 They fill the room with their sound too, something that bands who create an intense environment at their shows can often fail to do when the venues get bigger, but the strength of these songs mean that they grow with the surroundings. Their cover of Lipps Inc's Funky Town might be an unusual one, but they deconstruct it and recreate it as a Scuttlers song to the extent the people in front of us who don't know the original are raving about it as one of the best new songs they've ever heard.

Half-way through his set Jordan stands on stage whilst the rest of the band play a short snippet of Survivor's Eye Of The Tiger and nothing could feel more appropriate in that moment. Almost eaten up and spat out by the machine of the industry and losing his guitarist and drummer, Jordan dusted himself down, booked this adventurous gig, found himself a new band and written what he describes as the best material he's ever done. He tells us his previous management had told him they wouldn't sell out Gorilla. They did and he announces near the end of the set that they've booked The Ritz across the road for next April.

Tonight's sell-out is a game not even his beloved Bolton Wanderers could lose. The crowd, buoyed by an afternoon on the booze it seems, are in fine voice, singing "Wanky Wanky Wanderers" for about five minutes flat in the build-up to the show which seems to last an eternity. Now shorn of his responsibilities of playing guitar by the addition of two guitarists - brothers Kurtis on lead and Cameron on rhythm - he makes a big entrance once the band have struck up into the opening bars of Imperial Leather Drama and spends the night bounding round the stage. He tells us it's the best night of his life, but just observing him tells us that without the need for him to do so. His excitement is shared by a moshpit that doesn't stop for breath throughout the thirteen song set, and he ends up in it at one point as does bassist Kieran.

It feels like he's taken it as his personal responsibility to ensure everyone leaves the room buzzing, encouraging Manchester to "lose your shit" at every opportunity through the likes of old favourites Helter Skelter, White Lines (which incorporates a bit of Fatboy Slim's Praise You), Set In Stone and Too Much Too Soon, which finishes with him planting a kiss on Kieran's forehead. He talks about them being in new guises, but in reality he's found a band that fit together perfectly as a unit, with drummer Ailis the powerhouse at the back driving these songs along. 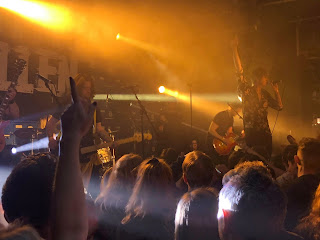 There's a touching moment where Jordan dedicates 110 Ways To Make Things Better to his Dad and biggest fan Kevin who is sadly no longer with us. He's here in spirit though and its his voicemail message that opens the song and there's a few people around who know exactly what this would have meant to him with something in their eye for a moment.

There's new material of course, comeback single Never Give It Up, quite fitting given the circumstances of the gig, and what Jordan tells us is the best song he's ever written The Rapture both have the Jordan Allen DNA in terms of songwriting craft, but both of them have an harder edge that feels like a return towards his earliest songs that first brought him to our attention six years ago. There's a real sense, and he mentions it himself several times, that this is very much going to back to having full control of things and dictating his own direction and that can only be a good thing.

There's a lot of love in the room, thanks are given to people who've travelled from as far afield as Spain and Germany specifically for the show, as well as the sizeable crowd that have caught the number 8 bus from Bolton, all of whom have allowed him to "keep his brain alive" in his own words. As they finish with Rosie, and six hundred people spell out her name, there's a sense that, whilst there will be bigger battles ahead to establish himself outside of Manchester, this was a triumphant home win, cheered on by ecstatic fans who've remained loyal to him through difficult times. A new beginning.

Jordan Allen is on Facebook and Twitter. He supports The Slow Readers Club at London Boston Music Rooms (December 17), Wolverhampton Slade Rooms (18), Manchester Ritz (19) and Glasgow Garage (21) and has announced his biggest ever show at Manchester Ritz on April 24.