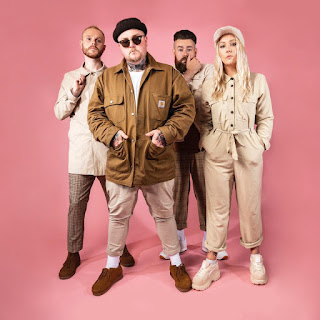 With their self-titled long-awaited debut album set for release in March 2020 and their biggest ever headline show just announced for Manchester's iconic Ritz venue, things are finally falling into place for The Lottery Winners, one of the most-loved and enduring bands in the North West. We caught up with Thom to talk about the album, new single and video Hawaii, playing The Ritz and what it means to finally get the break they deserve.

You've just announced your self-titled debut album to be released via Modern Sky in March 2020.  How does it feel to finally have your debut record coming out?

It’s a range of feelings. It flickers between bursting pride, terrific fear, excitement, anxiety and relief. It’s been a long time coming. It’s a great album, I know it is, but I feel like there’s a lot of expectation and I hope it lives up to it. I thinkit does. Maybe it’s all in my head. Maybe nobody is bothered.

Way back in 2013 we reviewed you and commented "Someone behind me suggested he sounded a bit too much like Brian Potter off Phoenix Nights, but it's refreshing to see a band that's not afraid to look and be uncool, especially when they write great songs with fantastic melodies and hooks.  Surely that's cooler than standing there looking all mean and moody."  One of the best things about the band is that you're very clearly being yourselves - has that been important to you over the years?

I’ve never like, consciously decided to be myself. It just happens. Sometimes it gets me in trouble and sometimes people like it. I’m learning to like it. I’ve never really been interested in bands that are quite clearly pretending. I think you should mean everything you sing, and do everything you feel. If you’re being completely authentic, then you’re doing everything you can and if people don’t like it, that’s cool. If they do, that means an awful lot more.

Could you tell us about the album's lead single Hawaii?

I wouldn’t say it’s the lead single. It’s more of a starter, the main meal is yet to come. Hawaii is a nice song. It’s about escaping. It was written in an old abandoned chapel in the middle of winter, we had managed to blag our way in there to write the album. I could see my breath and couldn’t feel my fingers on the guitar strings, so the subject matter kind of makes sense.

The video had you asking for all sorts of favours on social media.  Where did you get the idea from the video from?

Oh, I don’t know. I have these mad ideas all the time and then leave it till the very last minute to pull them together. So I was driving around for two full days picking up palm trees and paddling pools. I do, however ALWAYS pull them together.

The album cover is pretty striking -  a pink cover with lots of dogs on it - and the vinyl itself is going to be bright pink.  What inspired you to do both in that way?

Thanks! The album cover is three massive dogs and one little ratty one. I think we’re the little ratty one. I’ve always kind of seen us a bit of an underdog, and known that we had to work much harder because we don’t look like some other bands. Then we, (our genius photographer Jamie Lundy and I) put all the dogs together on the pink background and tried to get a picture of them whilst throwing cheese everywhere. We wanted to avoid just photoshopping the image together. I really like how it turned out. I love it, actually.

How did you go about choosing the songs to put on the album?  Having been around for so many years, you must have had to make some hard choices to leave out some of your own and your fans' favourites?

It was proper solid; we have about two hundred and fifty million songs! We wanted the album to really feel like an ‘album’, whatever that is anymore, so we picked twelve that really felt like they belonged together. We have, however, left of probably the biggest fan favourite, and the more I think about it, the less I know why. I suppose everybody will have to hang around for album two!

You recently sold out The Bread Shed in Manchester months in advance, your first headline show here for some time.  How did it feel walking out there and knowing that you still had an audience waiting for you and ready to fork out to come and see you?

It felt divine. Better than drugs, better than sex. It was the first time in my stupid life that I actually felt like we were a real, actual band.

And you've announced a much bigger show at The Ritz for next year.  Did you ever envisage when you started off that you'd have your name over the door at places like that?

Oh man, that venue is so important to me, as well. I grew up watching bands there. I’ve fallen in love there, I’ve danced there, I’ve cried there. It’s a big deal for me. I can’t believe they’re letting us do it.

In that vein, you're still very proud of your Leigh and Lancashire heritage rather than label yourselves as a Manchester band out of convenience.  Are you planning on doing something locally to support the album's release?

Yes! We’re thinking about doing a little Christmas thing. I’m working on it.

Once you've got the album release and The Ritz out of the way, what are your ambitions for the rest of 2020?

Mainly to lose my virginity. I hope that an album in the charts will do that. That’s the plan, by the way. I want a Top 20 album. Then I want to do all the festivals. I want to see the world. I want to be dead fucking famous.

Their album can be preordered here.

They play Manchester Ritz on April 11, tickets available via this link.  Before that they have shows at Liverpool Zanzibar (November 1), Stockton Monro Festival (9), Glasgow Broadcast (11) and Stoke Sugarmill (22).