TRACK OF THE DAY : Berries - Lies 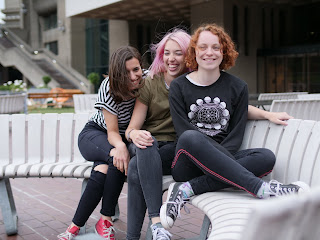 Berries return with their new single Lies, the title track and the second to be taken for their forthcoming second EP.

Lies is the follow-up to Silent that was released earlier this summer and is accompanied by a video shot by Caetano Sato. It sees Holly, Lauren and Lucie create yet another single with an irresistible riffs running through it as has become their trademark over their debut Those Funny Things EP and the intervening singles. It's a little less frantic than previous Berries tracks, but shows how they can create a song to draw you in and hold your attention when they slow things down a little and Holly's distinctive vocal runs through the centre of it adding extra edge and emotion to the words as she laments her protagonist's "white lies".


They play a headline EP launch gig at London Colours on November 6.