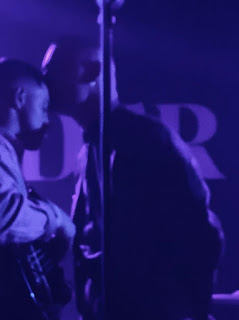 The Murder Capital’s sold out UK tour hit one of our favourite venues in the world on Monday night - the main room at the Brudenell Social Club in Leeds for another of those evenings that will live long in the memory of a band on the cusp. Support came from Brighton’s Happy Couple.


This is the third time we’ve seen Happy Couple on this tour and we’re slowly falling for them. Whilst their refusal to say much while on stage might be seen by some as indifference and aloof, it’s more about their total focus on their music. They start with a wall of guitar cycled through pedals to create an unsettling slightly intimidating atmosphere until the drums come in and Lena’s vocals fight their way through, delivered with an icy cold emotion that heightens their impact. Although when the song drops and she sings “don’t worry, you will be fine” you’re not sure whether to trust her or not. It’s that tension that captures your attention. 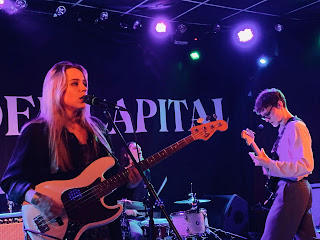 Like the headliners, they’re not an easy listen by any stretch, but the effort to immerse yourself in them is one that has much greater rewards. Tight taut drum patterns take over, the sense of anticipation builds, but you’re not sure into what until it actually happens. They finish by kicking the drums over and departing without saying a word. The best music is on the edge and Happy Couple are right there, tiptoeing on the blade of the razor.

As the final strains of Burnt Out’s Dear James die down and the effects pedals are turned on to create a wall of noise, The Murder Capital appear one by one and strike up the opening bars to Slow Dance I and James makes his way on to the stage at the precise moment he sings the first line of the song. The song builds and broods, like the menacing clouds gathering before the most spectacular of torrential storms - the instrumental Part II needs no words, James just stands there, tambourine in hand, head bowed, soaking it all in. A quick glance around the room sees many others doing exactly the same thing.

“Words don’t really suffice to how much I love these boys, I’ve tried to word it before but it never works. I hope everyone has friends like these boys and they tell them they love them and mean it” is James’ introduction to On Twisted Ground. Sometimes though love doesn’t need to be spoken, it’s expressed in other ways. The sad lonesome bass that introduces is feels like the saddest sound in the world, a descent into the darkest place you can imagine. There’s silence in the room as the sparse guitars punctuate the heavy atmosphere and James’ words betray the heartbreak of the song, part anger, part utter devastation at loss. As the music slowly gets louder, then subsides and then the bass comes back in and James breathes heavily into the microphone, every raw vulnerable feeling is laid bare. 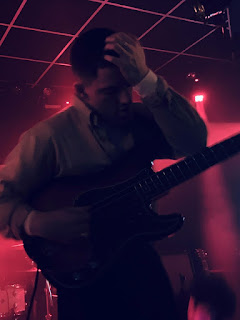 “It’s all about love” James tells us as Diarmuid’s drums beat out the opening to Love Love Love, creating the tension that runs through the song. James batters his band against the tambourine so hard he needs to get emergency repairs to his injured hand before mouthing his own words into the mic, lost in the moment as Cathal and Gabe go head to head, feeding off each other.

“Are you alive” James bellows as the guitars screech into For Everything, the drums hammered like they’re a call to arms. The song never stands still, like the front rows, the lyrical doubt and uncertainty accentuated by the twists and turns, stops and starts, builds and descents until you just have to submit yourself to it. “For everything, for nothing” feels like the most simple message - but it’s roared back by the front rows like it’s the most important.

Green And Blue’s extended intro allows us a little respite, and James time for more repairs, but it’s short as they take us on an intense winding journey that might be less punishing on the body than what’s gone before, but no less so on the mind.  The band prowl the stage, Gabe kisses Damien on the forehead, goes and stands next to Diarmuid, facing him as if to encourage him to go further and deeper.

“In celebration of death, we say don’t cling to life” ushers in the two and a half minute headrush of pure adrenaline that tells us what doesn’t kill us makes us stronger - like you have to go through the darkness to find moments of true light and revelation - “failing this, let’s dance and cry” as the antidote to everything the world can throw at you. 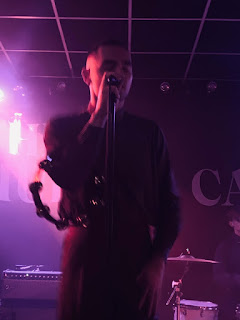 “What we ask for Leeds is MORE, MORE, MORE, MORE” James screams and the crowd scream back at him as More Is Less continues the punishing but exhilarating journey through this set. James jumps into the crowd, searching for people to connect with, lost in the moment like many around him.

“Let’s go baby, all the way home” James tells us as Damien and Cathal tease us with guitars and James bashes his tambourine against the monitor. We know what’s coming, but still Feeling Fades lifts everyone up even higher than we were as they throw themselves around the stage. James beckons one of the crowd up on stage, hugs them like he’s met his long-lost brother before directing him back from where he came then joining him, hoisted up on a sea of arms. The song finishes with Diarmuid knocking his drum kit flying, Gabe joining in and Damien and James tweaking every last bit of noise out of the effects pedals.

Then they’re gone. We’re exhausted but alive with the sort of buzz that means sleep is going to be a premium, the adrenaline generated by a gig like this is like no other drug, the way music can speak to you in ways that others means of communication cannot. Every The Murder Capital show is different, fuelled by the band’s mood, living in the here and now because we don’t know what’s round the corner. They are the brightest stars in the sky right now - a beacon of love and hope in the dark dark night.