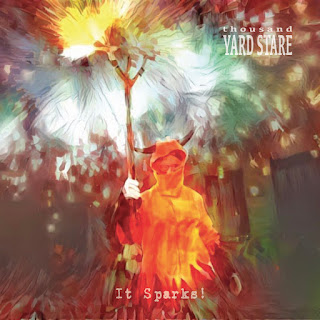 It Sparks! is the first new material from Thousand Yard Stare since 2017’s Deep Dreaming / Stargazing double EP. Backed with a stripped back pastoral version of Tragedy No 6 from their second album Mappamundi and a demo version of the single, it shows they’ve still got plenty to give.

The best thing about It Sparks! is the way it both feels familiar and warm, the trademarks of Thousand Yard Stare’s criminally underrated albums Hands On and Mappamundi, yet you can hear how they’ve moved on with time. It’s ushered in by dramatic dancing strings before their trademark chiming guitars kick in. It’s nearly a minute before we hear Stephen’s reassuring vocals. Lyrically it possesses all the intelligent wordplay you’d expect from them - “for those who boxed it clever and are now clinging to the ropes when it goes dark.”

The chorus is uplifting, surprisingly so on first listen, but without any hint of bombast or pretence. Musically it loosens the ropes as the song progresses aided by a very crisp and unfussy production that allows us to hear the intricate details in the guitars, the mid-song solo in particular.

Tragedy No 6 is fragile, starting with everything pared back allowing the simple beauty of their songwriting to shine through and the story of tragedy of a young death to be told evocatively. It’s a worthy reassessment of a song lost in dusty filing cabinets. The home demo version of It Sparks! completes the EP and comes pretty fully formed and not a million miles away from the final version except the guitar solo is missing - but without some of the rougher edges shaved off.

With rumours of more new material and possibly an album in the works, this is an exciting release for those who held this band close to their hearts and eulogised about them. It will bring back memories and offer the tantalising prospect of new ones.

The EP is available on Bandcamp