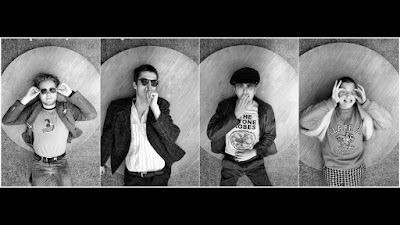 The Wha might only have released two singles, but they're already signed to star-maker indie label Chess Club and making enough noise to be considered the next in line of bands to come from the fertile Irish music scene and make their name in the UK. We caught up with them for a chat about their roots, the expectation that's been placed upon them and plans into next year.

Could you introduce the band please?

Your name is an intriguing one, how did you come up with it and what does it mean?

Finn : My cousin came up with the name. It's just something you hear a lot. You wha? The Wha. Probably shouldn't be analysed too much.

You've been signed to Chess Club before even releasing a single. Does it feel like there's more pressure on you, or less, having signed to such an illustrious independent label so early on?

Sam : I feel like there's a lot less pressure having the stability of the label, there'd be far more pressure if we were doing this on our own. Chess Club take a great deal of the workload, giving us more time to write the money makers.

Your first two singles, originally released digitally, Innocents and 40 Odd Years, have been combined onto a 7" single. How did it feel having something you've made that you can hold in your hands and people can cherish a physical object?

Marek : It feels like a milestone, having people be exited about purchasing something that you have made is a whole new feeling, we feel loved and appreciated by our so far humble group of fans, I know I'm awake but I feel like I'm in a dream.

Innocents has a line in it "you call it national pride, I call it genocide" - what are you referencing in that line?

And what inspires you to write lyrics?

Do you write songs together as a band or does one of you bring ideas or fully-formed songs to the rest of you?

The second one but sometimes the first

There's going to be inevitable comparisons with other bands because of geographical location and an element of competition introduced by outsiders. Is that frustrating or something that you welcome?

It hasn't happened too much so far but if it does I don't think we'll be too concerned. We'll just keep doing our own thing.

You clearly have your own sound, but which bands influenced you and made you want to form a band and make music yourselves?

Marek : I guess whoever we were listening to in 2016, it's mostly all the bands you expect 16 to 18 year olds to be listening to, Arctic Monkeys, The Shadow Puppets, The Beatles etc etc, we all also seen Scott Pilgrim and School Of Rock at some point in our lives which planted the ideas of playing music in our noggins.

Are there plans afoot to come over to the UK soon and play around the country?

Well the plan is to play loads of class gigs all over the globe and England is on the map, and objectively the closest country to Ireland.

How would you describe The Wha to someone who's never heard any of your music?

They play Dublin Whelans on December 13.

Email ThisBlogThis!Share to TwitterShare to FacebookShare to Pinterest
Labels: The Wha