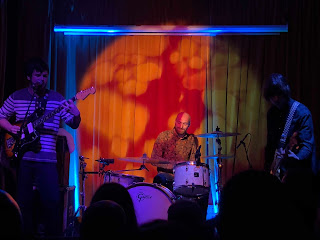 Déjà Vega's biggest Manchester headline show to date at Gullivers sold out in hours (they've since sold out the Deaf Institute six months in advance). As they prepare for next week's release of their long-awaited debut album, a packed room celebrated one of the North West's best live bands finally starting to get the recognition and success they deserve.

Hot Soles are a duo that make a lot of noise. Full of energy, so much so that Kieran jokes that playing a gig is like their version of Weight Watchers, driven by just his guitar and vocals and Rich's drums, they make a ferocious racket, one that's insistent and persistent, pummelling everyone into submission. Yet with just two instruments at their disposal each song has a life and vitality of its own that keeps people engaged with them. 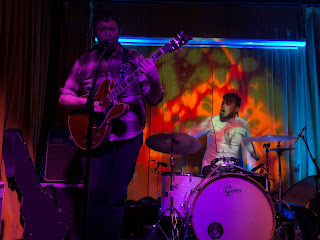 It is Déjà Vega's night though and the roar as Jack declares "Good evening Gullivers of Manchester, we are Déjà Vega" feels like one of vindication. They'll have opened for many lesser bands in this room and blown them away many times over the years, but their time is coming and this feels like another staging point rather than a peak. Across fifty minutes and just nine songs they justify every single superlative that's been thrown their way recently.

While Jack might take most of the attention with a ferocious performance where he looks like he's been possessed by demons the moment he plugs in his guitar, Déjà Vega are, like the very best bands, much more than the sum of their component parts. Mike's bass provides the subtleties that lie underneath the wall of sound whilst Tom's drumming provides the robust canvas upon which the likes of the opening Mr Powder and the album's other singles Pentagrams and Eyes Of Steel are constructed.

Where most bands releasing their debut album would be playing the record and nothing else, Déjà Vega are once again breaking those rules of engagement. Four of the nine songs - Spitting Gas, No Shalom, Who We Are and Harmonia - are new and won't feature on the record. It shows how they are a band looking to move forwards, adapting their style, experimenting with new diversions on their sound. Their mastery at lower volumes and reduced pace is as exemplary as it is when they hammer the accelerator pedal down to the floor. 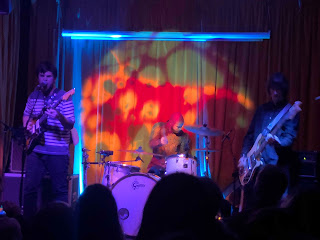 They finish with a sixteen-minute version of The Test, a song with enough ideas for an album on its own. It veers and careers through a winding path, the three of them connected intuitively as the song hits the breakdown and it feels like they're having a studio jam rather than in front of their biggest ever headline crowd.  Jack, cowbell in hand, jumps down amongst us and is mobbed, he returns to the stage and then comes back with his guitar. He's surrounded by an adoring moshpit, as lost in the moment as he is. They resist calls for an encore, because there is really no way at all they can follow it.

The success that Déjà Vega are currently enjoying is testament to the fact that the combination of hard work and the ability to create music this powerful will eventually find a home even against a wall of radio and press silence. For lovers of music with intensity and passion they are a band to set the pulses racing and the feet moving. They've fused their influences into something that's uniquely them, standing out from the crowd and retaining an unshakeable belief in what they're doing. Their time is now.

Déjà Vega played Mr Powder, Spitting Gas, No Shalom, Who We Are, Chasing, Harmonia, Pentagrams, Eyes Of Steel and The Test.

Their debut album can be preordered on vinyl via this link.