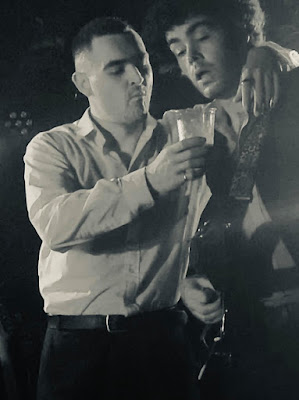 The Murder Capital juggernaut rolled into Glasgow on Wednesday night for a sold-out show at a steaming hot King Tut's Wah Wah Hut with Happy Couple in tow.

For a support band to get such a warm response from an audience that doesn't know them (they only have one song online currently) is a rarity these days but that's what Happy Couple achieve once again. In their final song Lena sings "the tension between us is growing" and that sums up their performance - it's a very intense experience, one that draws you in, unsure of whether their song's next move is into an almost deafening wall of noise or whether it is going to stop dead for Lena to sing on her own before turning around and heading off in the opposite direction. 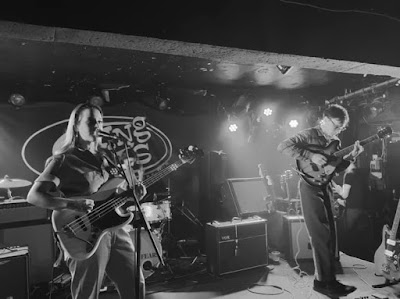 They don't say much, they don't need to as their music does their talking for them. Lyrically the songs come from a dark and cold place inhabited by Ben's guitars and effect pedals, George's pounding rhythmic drums and Lena's taut rigid and repetitive bass lines which combine to create that tension that makes them such a gripping live act and one that the audience listen to rather than continue their conversations.

We're running out of adjectives to describe The Murder Capital and none we choose seem to adequately describe the experience of watching them in the flesh, six feet away from you and closer at times when they venture out to us. They now have the weight of expectation on them with this tour sold out and a huge tour scheduled for February next year, but rather than shrink they're blooming, each night becoming more theatrical, an event rather than a mere gig, a coming together of like-minded souls of all ages from teenagers to the middle-aged drawn in the magic of the twin healing powers of friendship and love and the imperative to live both to the absolute maximum.

They have technical problems throughout the show tonight but such is their surging confidence that it fails to throw them off track, they simply improvise their way around it, extend the intros to songs, bury their heads together in a show of solidarity and soak in the response to the empowering impact they and their songs have on the crowd. 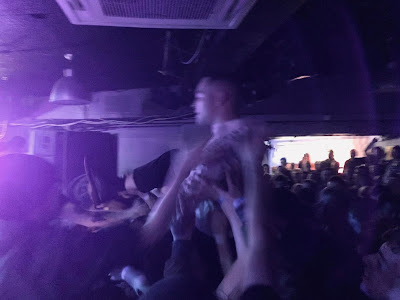 They seem to have settled on this setlist now after months of ripping the nine songs up each night and mixing the order around. Whilst it takes away the excitement of not knowing the order of the songs, it feels like that moment when you know something is coming but even when it hits you're unprepared for the effect it will have. Slow Dance builds and builds until it feels like the pressure cooker is about to explode, a technique they use on the intro to For Everything later as well in a different context, and then the release valve drops it into the instrumental second part where James comes down and joins us on the barrier to immerse himself, like us, in the magic that's happening on the stage.

"I'm sick of losing friends to demons" James tells us before On Twisted Ground. It's a song that blows away toxic masculinity, the bastard that is killing so many men because they feel it is weak to show emotion and let it grow inside them until they can't take anymore. Strangers and friends hug each other at the end of it, the performance immaculately observed again by the crowd, and through the dark horrible abyss of experiences comes hopefully a learning to help tame those demons. Music is one of the most powerful weapons we have in that fight and The Murder Capital are providing the heavy ammunition.

The rest of the set then feels like the catharsis, the expulsion of all those horrible thoughts that have built up and which have now been loosened. The band prowl the stage, looking for one of the others to face off to, look in the eyes and share the moment.  Whether it be Green And Blue, powered by Gabe's lead bass and Diarmuid's shuffling drum patterns that dictate the pace of the song and the audience's reaction to it or the intensity of the build of Love Love Love and the frantic manic opening to For Everything where you think we're careering into a wall with the foot pressed down hard to the floor on the accelerator before swerving away at the last moment on to the open road, The Murder Capital are creating unique moments in time each and every night, feeding off each other and the crowd. 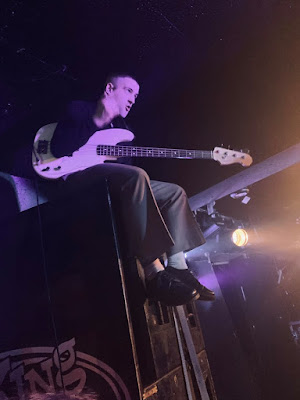 "All we ask for is more. More for you. More for us" is the introduction to More Is Less but it could describe this whole experience. When we connect like this, everyone wins, no one feels alone at one of their shows even if they are unaccompanied because they bind us together. James is out on the barrier for Don't Cling To Life and somehow ends up with someone's ring on his finger, an over-exuberant crowd surfer gets to the front and nearly pulls him off the stage, but he just gets back up and gets on with it. Cathal and Gabe come down to the barrier with him on More Is Less and then James launches himself on top of the front row and gets carried back to the middle of the room, legs and arms flailing and not missing a single word.

They finish with Feeling Fades, Gabe having climbed on top of the speakers to a small gap between the top and the ceiling, with security looking worried beneath him that either he'll fall or he'll topple the whole thing over on the crowd. He's not worried and below him neither are we, because there's a trust that these five boys have that reaches out to us and binds us. The end of the song is a blur, James back out amongst us, dropped on to the floor and then picked up and hoisted back on to the stage where he sends a monitor flying and Diarmuid and Cathal do similar with the drum kits and Gabe drops his guitar and walks off after staring at us like a man possessed with the wickedest grin on his face.

There is so much love in the room at a Murder Capital show, it's a place to come and let everything out and discover or reiterate that love is the most important thing in the world, it's what it's all about and this band are the soundtrack to that.