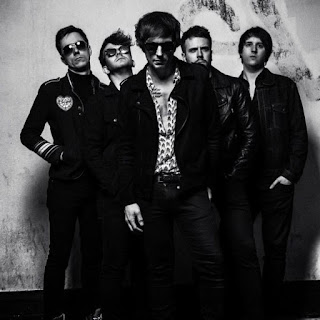 It's been a busy year for Leeds' Apollo Junction. They've released their debut album Mystery, played festival bills with some of the biggest names in indie around and have had their music on TV in the UK and the US. We caught up with them for a chat about all that and their plans for touring in 2020.

Could you introduce Apollo Junction please and tell us a little about how you got together?

Ok well we are Jamie (vocals), Matt (guitars), Ben (bass), Sam (keyboard) and Jonathon (drums). We are a five-piece from Leeds, Yorkshire. We play massive electro indie anthems which are born out of the 80s and 90s Britpop era with a slight nod to acid house meeting the 1960s at a party.

It’s a standout name that you have, how did that come about?

We always liked Apollo, due to it being the God of music and if we are honest we like the Rocky films (get up you bum!). We met a lot in pubs early days discussing ideas and all that jazz, one time it was in a pub called The Junction. Think it was our guitarist who said "how about The Apollo Junction?" we lost the The and yeah the name stuck.

Does one of you write the songs or is a collaborative effort?

We don’t all usually write the songs together in the sense that we are all in a room, but we all contribute equally. Once one of us has an idea we share it and work together. All songs are written by Apollo Junction 20% each because we are mates not egotistical knobheads.

You’ve just released your debut album Mystery but only have one other song on Spotify. Most bands have half the album out there before releasing it. What made you do it differently?

We believe in the art of the album. The bands we all love have all put albums out this way. Streaming is great but it takes the love away a little. The youth nowadays will never understand having to spend two hours on a bus to get the album you wanted on CD on release day. We wanted to make an album, a body of work - eleven songs and here we are.

And how has the reaction been to the record?

Reaction has been amazing and far more than we could have imagined. People all over the world have bought it, it’s stocked in HMV from Leeds to Japan. Some people have been talking about it in the list of great debut albums. We just keep thinking we tried to write a few songs, we didn’t mean to get on the radio and it to blow up like this!

You’ve played with some pretty big names, which one did you enjoy meeting and being on a bill with most?

Well James was probably the most special just in terms of the size of the band. But our guitarist met Doves early at a festival we were playing and said they were the nicest people. Cast were cool, Shed Seven are so supportive and nice. Wow we have met some great people! Oh actually Craig Charles was a total dude as well and Colin Firth watched us from side stage at Isle of Wight Festival - that was a strange but ace gig.

You’ve had songs on MTV’s Are You The One. How did that come about and has that given you a big US following?

Getting a big US following is really hard due to the size of the country but when the album came out we got plenty of sales over there. We probably can’t justify the tour just yet though! Our publisher John gets us all kinds of crazy stuff like this. We are the music to the coming up next section of Football Focus and we are going to be on a computer game soon called Watch Dogs! It’s so crazy!

What are your plans now the album is out? Will you be touring or looking to place new places?

We will head out on tour at the start of the New Year which we are really looking forward to! So please keep your eyes peeled to our social media and we'll see you down at the front.

Could you describe Apollo Junction to any of our readers who haven’t heard of you before?

We write massive songs to make people sing. When we play Gigs the crowd say they feel like they are part of the experience with us, if I was to say what I think Apollo Junction is all about I think it is belonging. We as friends all belong together in Apollo Junction and us fans all belong with us. It’s an exciting time and everyone should get involved. Music and its power to unify have never been as important as it is today in our opinion.