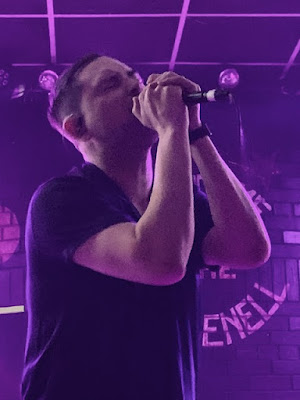 The Twilight Sad returned to one of our, and their, favourite venues for the second night of their current U.K. and European tour producing a breathtaking, cathartic experience that left the crowd on their knees.

Brudenell Social Club is very much an iconic venue and one which the band hold very close to their hearts after playing here many times throughout their decade and a half existence so where better for James Graham to exorcise his demons than here in front of an adoring congregation.

Following technical issues on the first night in Newcastle, which the band put down to gremlins, it was obvious from the start that tonight they were going to make amends and that’s what they did with a flawless, pulsating set of fifteen tracks spanning four albums as well as crowd favourites The Wrong Car and the emotional tribute to Scott Hutchison that is Keep Yourself Warm.

Tonight’s gig offered moments of darkness and light with some touching tributes along the way confirming The Twilight Sad as one of those empathetic bands whose music means everything to them and those that they surround themselves with.

There are shout-outs for the wholesome John-Paul, Scott and Grant - not forgetting James and Nathan from Brudenell - who they all hold in such high esteem. All heartfelt gestures and you know they are eternally grateful to those who have stood by them including their loyal fan base.

The brutal, relentless assault of the opening trio of [10 Good Reasons For Modern Drugs], VTR and Last January set the tone on a night when the majority of songs exploded into life with James possessed by something inside twisting, gesticulating, jerking and beating himself up both physically and mentally. Maybe it’s the venue that is acting as an extra boost. Whatever it is I don’t think I’ve seen James so animated....ever.

Not even a broken mic can hinder James as he studies it close up before calling it a “wanker” before apologising to someone he’s made eye contact with in the crowd explaining the insult wasn’t for him. Typical James. 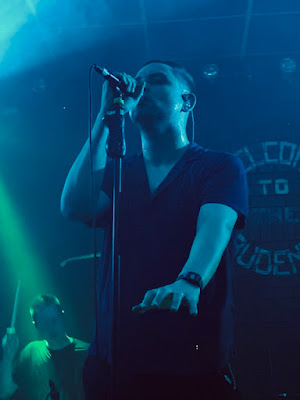 After I’m Not Here [Missing Face] James exclaims he’s “fucked” and it’s hardly surprising given the monumental effort he’s put into the song. The crowd laugh but James reiterates “no, really, I am”.

There are other heartwarming moments when later on in the set we are told how special a social place Brudenell is. James telling us how the space caters for all. Football, music and community and how we should all look out for each other. “Listen to me, I’m not really a preachy person. I mean...I’m not fucking Bono”.

No matter the size of the venue it still feels claustrophobic as you feel yourself getting sucked towards the band onstage. They entice you in, James sharing his demons and encouraging you to do the same. A unique experience from, ultimately, a unique band.

It’s not only old favourites like Reflection of the Television and The Wrong Car that go down a storm with the mixed crowd of old and young as songs off the last album Let/s Get Lost and Girl Chewing Gum provide the upbeat tempo that keeps the crowd on their toes.

Such songs have witnessed lively mosh pits in the past but tonight it’s a safe haven for all those present. Everyone feeling safe, looking out for each other, ensuring that people can release their emotions as they hug, embrace, cry or just shut their eyes and lose themselves in that moment.

Cold Days From The Birdhouse, from the critically acclaimed Fourteen Autumns and Fifteen Winters, sees a visibly emotional James look on in amazement as people sing back every word to him. It’s a sight that puts a smile on the faces of Johnny, Seb and Brendan but not Andy of course.

As we approach the end of the night, and the opening notes of Keep Yourself Warm, arms are raised to salute Frightened Rabbit and Scott in particular. This is one of those moments that leaves you in a purgative state. The sight of the audience purifying their minds and hanging on every single word that James sings. As James, tears streaming down his face, beats his chest and sings his heart out you can feel the connection between band and audience and this is precisely what music is meant to be about. To accentuate this further James roars “the rabbit WON’T die” on final track And She Would Darken The Memory on an impassioned and poignant night. Everything is left out on the stage. Souls bared, hearts outpoured. With nothing left to give James collapses on the floor, exhausted both mentally and physically.

As people comfort each other at the end the message is clear from tonight’s show. It’s okay not to be okay and it’s evident from this showing that people really aren’t okay but they’re surviving day by day thanks to important bands like The Twilight Sad. Music is the oxygen that keeps many of The Twilight Sad fans breathing and on tonight’s showing they are much alive and kicking.

The Twilight Sad played [10 Good Reasons For Modern Drugs], VTr, Last January, The Arbor, Let/s Get Lost, Reflection Of The Television, I/m Not Here [Missing Face], Sunday Day13, There’s A Girl In The Corner, Girl Chewing Gum, Videograms, Cold Days From The Birdhouse, The Wrong Car, Keep Yourself Warm and And She Would Darken The Memory.

The Twilight Sad's official website can be found here.