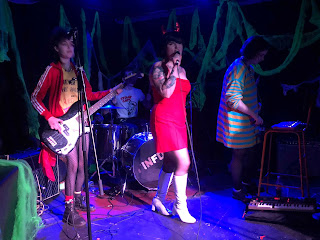 Intrigued by their on-line presence and the scratchy demo they'd posted on their Soundcloud, we caught up with The Red Stains playing the Deco Records Halloween event at Retro on Saturday teatime.

We love The Red Stains before they've even started. They've gone round and circled their name in red on every poster and line-up timing for the event in the room and Natalie downs a shot of vodka just before she goes on stage. This sense of harmless fun transmits itself to their performance, seven songs about all aspects of life from shopping, getting screwed over, disappointing your parents and one of the banes of travelling Mancunians life - the Metrolink - with a Fall cover thrown in for good measure.

If you want a shiny polished band then you're looking in the wrong place. The Red Stains celebrate the fact that they don't write nice pop songs about this and that and nothing of importance. Natalie screams and sometimes screeches rather than sings at times, they forget the start to one of the songs twice but don't bat an eyelid. The Red Stains don't give a shit, but you should, because despite the chaos and anarchy on stage, they're awkwardly and unexpectedly brilliant, their view on life will make you smile, it'll make you laugh and if not their riotous performance will do.

Their songs have a real rough and ready spark to them, just keys, bass and drums providing the slightly wonky canvas across which Natalie splatters her words, often using weird but clever rhymes, struggling with her voice by the end such is the energy she's exerted in blasting out these weird and wonderful stories - not helped by the sound engineer turning off the mics. By that time they've already won over the front rows cramped into Retro, which hasn't changed a bit in however long it's been there.

"This one is about being a fucking mug" is Natalie's introduction to Mannequin, a song about just that, because they don't deal in hidden meanings or subtle messages, as confirmed by Pacer Train which wants her antagonist to be hit by a speeding bus on rails. The sparsity of the songs and the nature of the delivery gives that anger a real depth when coupled with lines like "pissing in my mouth when I needed water" - unpleasant but wonderfully worded to make their message impossible to misunderstand. Freezer Jesus deals with obsession with shopping - "the Arndale is always in my sight" with name-checking Fray Bentos and chicken nuggets - delivered with wit and very much tongue-in-cheek, comparing it to a religion.

"This one is about being an absolute liability and a disappointment to your parents. What's not to love about that?" Natalie asks before Mother's Ruin, a tight claustrophobic song that never stands still, jerking nervously via Ben's drums and Ella's keyboards, that builds through her recollections declaring at the end "I don't care, fuck you" and you know she means it. "This goes out to Mark E Smith, let's get totally fucking wired" is the next instruction and they deliver a cover version that might even have impressed the great man himself such is the way they've taken the song and made it even more bonkers than the original as Natalie joins us on the floor and sings back at her band mates.

They finish with Jump The Met, their response to the shit service on Manchester trams ("a big fuck you to Metrolink"), Sterling's skeletal bass underpinning the song. Even with the mics switched off, Natalie's loud enough to ensure it doesn't ruin it. She apologises for it sounding rough at the end, laughing that they were all a bit rough, which if she wasn't in the band you'd be telling her she'd missed the point completely.

You won't be able to wash out these red stains with soap and water, however hard you try, and they're not going way without a fight, so it's best to just give in to them before they beat you into submission.