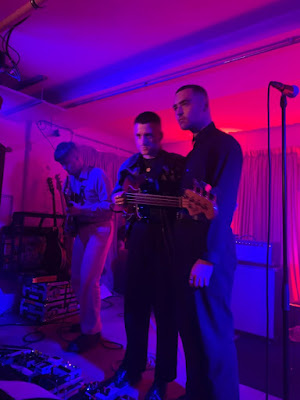 The Murder Capital brought an end to their sold-out headline tour to promote their debut album When I Have Fears with a sold-out show at Manchester Yes supported by Brighton-based trio Happy Couple.

The room's less than half full when Happy Couple on stage, probably because they haven't had the hype and exposure that draws Manchester crowds in to see support bands. It's their loss though as Happy Couple are one of the best we've seen, each time we see them the songs reveal more layers to them - from their only song online at present Split In Two which is a perfect example of how to do songs that stop, start and agitate the listener's attention by leaving you unsure of where it's going next to their epic multi-faced set-closer Eyes Shut. 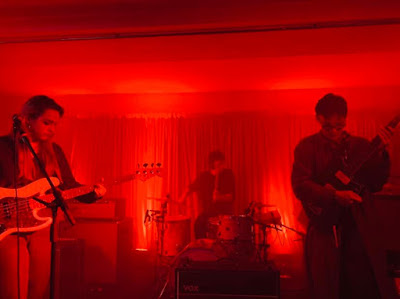 Some of that is to them growing in confidence from the warm reception they've had every night in both their performance and their movement, Ben losing himself in the songs whilst Lena remains ice cold, calm and collected. By the end even here they've won over the filling room despite the wall of guitars and drums and the usual poor sound in Yes not necessarily making them as accessible as many lesser bands on first listen. They're in baby steps as a band still which makes it even more exciting so the possibilities for them are thrilling.

As the previous nights The Murder Capital start slow and build to a frightening crescendo from the subtle widescreen inward-looking reflection of Slow Dance I to the full-on charged chaos of Feeling Fades that brings the forty-five minute journey to its conclusion. But tonight it seems to take longer for things to explode and only James out of the band comes into the audience tonight. There's a number of reasons for this, the static crowd early in the set, the sound that doesn't do the subtlety and rawness of The Murder Capital proper justice or the photographers who think the gig is being put on for their benefit primarily - however when the explosion comes and a crowd-surfer launches himself above our heads three times with James demanding "catch him now" and James himself finishes the set on his back held up by us with the members of Happy Couple either on the stage or in amongst us as well, the impact is just as powerful.

The intensity levels on stage never drop though, despite the fuel that the audience / band interaction pours on the bonfire of their live shows not arriving until later in the day. Slow Dance feels even more claustrophobic with the pink backdrop and James having nowhere to go but to go to each of his band mates and kiss them. It's moments like this where you see where The Murder Capital have formed such strong unbreakable bonds with each other that have withstood the loss of friends and their ridiculously busy schedule. 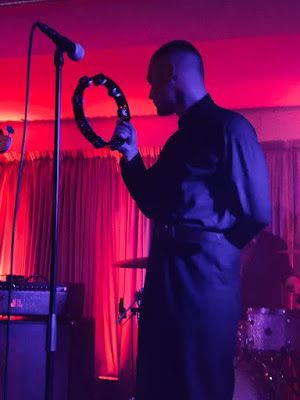 "This is for everybody who should be here" is how James introduces On Twisted Ground and even the noise from the chatterers at that back that plagues gigs here so often is silenced. That's testament to the power of the song that people don't need to be asked and it's a subject matter that will have affected everyone at some point. It's beautifully observed and it feels that they're adding layers to the music over time to heighten that feeling of helplessness in these situations.

Love Love Love and Green And Blue are pregnant with tension, the instrumental sections in particularly where James prowls the stage looking for connection, staring wildly out across the front rows, encouraging the crowd to immerse themselves totally. It takes Don't Cling To Life to kick everything off properly though and then the front is turned into a moshpit of bodies with the aforementioned stage diver at the forefront and while the intro to For Everything feels like it lasts an eternity, it's exhilarating in its build and when James steps back from the mic and lets us finish the repeated "for everything, for nothing"

The rest of the set is like a juggernaut, unstoppable momentum propelling them and us forwards, gathering speed as we go, threatening to lose control but managing to stay on the road. The love flows from stage to crowd and is sent back multiple times over. They're joined on stage by Happy Couple for the tour's finale as well as several members of the crowd and Feeling Fades is like the final expulsion of the demons for this evening as James is lifted aloft above us heads and carried back to the stage.

We won't see The Murder Capital again in venues of this size (and hopefully not this one in Manchester as The Deaf Institute is superior in every single respect) as they head into bigger venues in February as part of an upward trajectory that is going to take them as far as they wish to go. This tour has felt like a confirmation of everything we already knew about them - the most important band in the world at this moment in time, expressing the darkest thoughts and feelings to music with a searing honesty and candidness that allows others to connect and open up. It's the sort of thing that saves lives, where music takes its place at the cornerstone of what matters. It is the fucking craic, to paraphrase James.