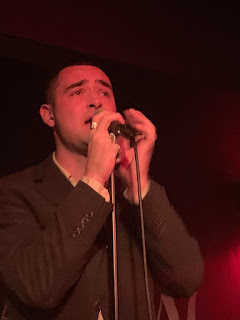 The Murder Capital’s extensive UK tour in support of their top 20 debut album When I Have Fears entered its first full week with a rescheduled date at a sold out Crescent in York. Playing all but one song from the album in an intense fifty minute set that ended in chaos and confusion, they demonstrated they can more than meet the heightened expectations. Support came from Brighton's Happy Couple.

Happy Couple are shrouded in mystery. Their debut single Feel Better seems to have been wiped from the face of the internet, whilst there's little information as to their identities and during the course of their half-hour set they say little other to introduce themselves and to thank The Murder Capital for having them on tour.  Their songs are tight, dense and claustrophobic and create an atmosphere than envelopes you as the drums emerge from the feedback and Lena starts to sing about frustration ticking away, anxiety and vicious viruses. 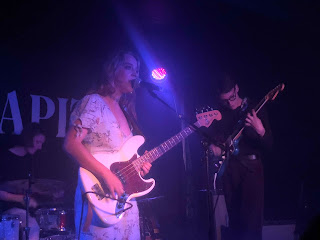 Their sound builds slowly, rumbling drums, guitars shooting in and out and Lena's voice slightly back in the mix until everything falls away and she's dead centre. It's an approach that's unsettling to the untrained ear who's witnessing them for the first time, but it's one that holds our attention and has us wanting to hear more and delve deeper into the songs and on tenterhooks waiting for where the song is going to go next. Their approach is a refreshing one, hard to achieve these days.

But it's time for The Murder Capital and the impressive Crescent venue has now filled up - and unusually sold out here doesn't mean crammed in so it's impossible to move.

The strains of their familiar intro track - Burnt Out’s Dear James - ratchets up the audience, impatient for their new icons to take the stage. A roadie comes on and turns on the effects pedals and the band make their way on stage and start to play one by one as the excessive smoke machine kicks in as James enters and they power into More Is Less. Despite issues with the microphone that return at points during the night, the sheer power of the song and the performance means that they are just a minor inconvenience. One minute James is stood stock still surveying the front rows, the next he’s possessed with the demons that run through many of these songs and lost in the dark recesses of his head where these songs come from whilst his band mates fling themselves around the stage, completely lost in the music and somehow managing not to wipe each other out as they do. He does though at the end of the song find time to admonish someone by asking them how their texting is going. 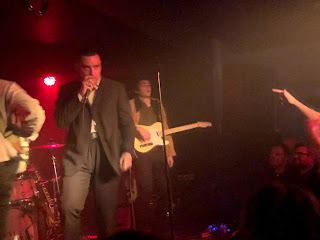 "Death, life, love" is the introduction to Don't Cling To Life, a song that feels like it's careering at breakneck speed into a wall, accelerating on its way to oblivion. But rather than facing death, it is a celebration of life and opening our eyes for a second we see arms aloft yelling back "failing this let's dance and cry" at James who's barking it out as if its his sole salvation.

There's some respite, at least in the pace of the song if not the heart and soul searching intensity, with Love Love Love. Cathal and Damien let loose over Diarmund's drums that create the nervous tension that runs through the song. It feels like the song could explode at any moment, as if it's clinging on to its sanity by its fingernails. It's completely intoxicating.

"What's the fucking craic?" James asks, stood cool as fuck with his hands in his pockets as if he's waiting on a street corner for his mate to turn up with fags and booze. Some of the crowd chant his question back to him, to which he replies by introducing Slow Dance and telling us that we're all legends. Slow Dance is just that, a song in two parts that has you closing your eyes and losing yourself in the music, in the desperation of those moments when you look inside yourself and don't like what you see. James' lyrics describe this with a detail that grips you and make it feel like he's found a way of reading your darkest thoughts when really he's relaying his own and creating the most powerful connection. The second part though is where the band take over, James having departed the stage and the four of them create a whirlpool of sound that draws you in and holds you vice-like.

"These are my best friends..... we're all trying to be better people, the best thing to do is to let your friends know you love them, that's the craic" is James introduction to On Twisted Ground. As Gabe's bass kicks in, the lights are extinguished leaving the stage in darkness. Some idiot shouts "tune" completely missing the point, someone yelps, again missing it, but they wait, the bass setting hairs everywhere on end as James makes a silent sign with his fingers across his throat to ask for silence and the York crowd oblige. Heartfelt, heartbreaking, it's the most devastating song we've ever witnessed played live in front of a room. Musically it's sparse with just moments where guitars come in for seconds and then leave as quickly as they arrive and James ends it face down in his forearm, breathing heavily. He embraces Damien at the end and we're left speechless, breathless and bereft. 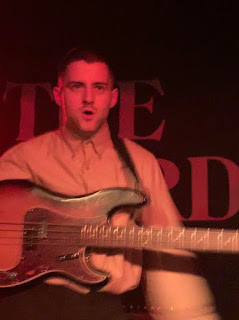 What makes The Murder Capital unequivocally the most important band in the world right now though is the way they take these darkest feelings and turn them into the strongest arm round the shoulder, the warmest most comforting hug and the most reassuring whisper that things will be OK as long as you open yourself up to love and to be loved.

There's not time for the audience to give On Twisted Ground the ovation it deserves before they kick into Green And Blue. There's problems with Gabe's bass though, so the others improvise, James talks into the microphone but we can't make out his words until he announces it's Feeling Fades and the others ignore him and continue with Green And Blue as the amp gets fixed. The song is held together by Diarmuid's drums, dictating the pace, standing dead centre when the rest of them drop out at the end. Like all these songs it comes into its own live, never sounding the same as the band follow their instincts, demanding that you lose yourself in it.

They go straight from Green And Blue into For Everything, James taking the tambourine strategically hanging from the ceiling, scanning the audience looking for eye contact with those to whom these songs mean what they mean to those on stage. With the drums building the foundation on which he delivers his mantra before the guitars come in and create a chaotic whirlwind of sound as it reaches the breakdown. It then builds back, growing in volume and intensity, James howling "for nothing, for everything, for nothing" lost in his own world, expelling the demons as the noise around him resembles the world falling apart before the drums clear everything else away and it finishes in a moment of clarity.

"Come close, there's one last chance to dance" James dares us as they prepare for the swansong of Feeling Fades. He wants to see the whites of our eyes, our reaction to the urgent, adrenaline-fueled music that we're submitting to and losing ourselves in completely. As the front rows descend into chaos, James jumps among us and lifted aloft, then is dropped, and then everything cuts out except for Diarmuid's drums which he continues to play unamplified. There's a moment of confusion as James lifts himself back up on the stage before one final deafening roar of adoration from the crowd as they realise that's the end of the evening.

This is the moment to catch The Murder Capital. Soon they'll have the weight of expectation on their shoulders, the bigger crowds where the curious come to talk at the back rather than submerge themselves completely in these songs and the pressure of delivering a second album that can stand up to the first - or they'll simply burn out because something with this ferocious energy is going to be close to impossible to maintain night after night.