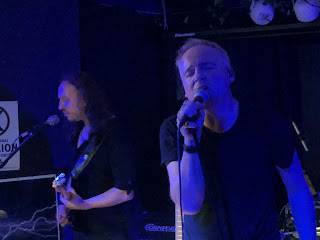 Poland's Glasspop finished a whistlestop seventy two hour trip to the UK with their first ever headline here at The Peer Hat in Manchester after playing five shows across two days at Lancaster Music Festival. Their set featured big anthemic songs from their Stranger In The Mirror album supported by Wolverhampton's Methods and Manchester's own Husk. 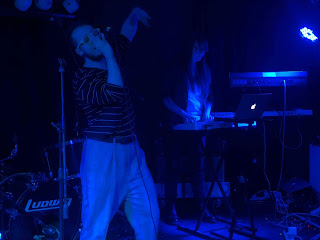 Husk's music is something a throwback to the days of gloriously infectious 1980s synth-pop. Accompanied by just a synths player and a backing track that sets the toes tapping involuntarily to self-penned tracks such as next single Feeling Heat as well a new track Feel The Time. There's an energy to the performance that the audience doesn't quite replicate on a dark Sunday night, jokes about requiring cardio after one particularly vibrant set of moves isn't completely lost though. There's a glammed up cover of Madonna's Lucky Star that does get people singing along though, before the five-song set concludes with You Got It. 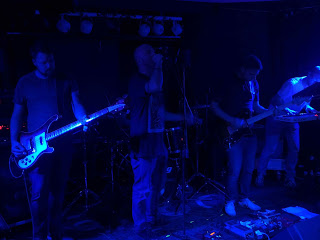 Methods have a different kind of energy to their set. They write big songs that they believe should be played in much bigger spaces than this and we'd tend to agree with them. Human Existence feels like a statement of the times we live in couched in a four-minute song that front man Ash sings like the survival of the world depends upon it. Collector and No Cover wouldn't sound out of place on the radio alongside many of the bands that they list in their influences and like many of them, Methods' focus is on their music and that alone, the power of it stronger than image and as The Slow Readers Club have shown you don't need to be in the first throes of youth and appeal to fourteen year olds to be successful if you have the songs and Methods have plenty of them.

"We took twenty eight hours to drive here" Maverick tells us, which would explain the huge set-up they have with them, banks of keyboards and pedals you'd expect at a big stadium show. But that's exactly how Glasspop treat this gig as if they're playing to thousands rather than a few dozen and their sound is impressively huge for a Manchester basement gig. They get us to sing along to songs we don't know, Maverick leaves the stage at one point to join us and watch Maciej perform a mesmerising guitar solo in the middle of the set. Songs stretch out, make themselves bigger and feel at home as the four of them demonstrate not just their musical abilities but the way they connect with each other and make music that they love as much as they want us to. 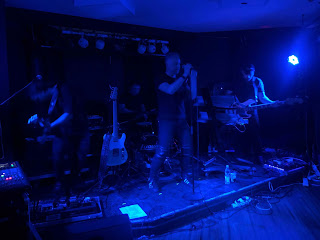 The set is heavily focused on their debut album Stranger In The Mirror and the live environment allows them to present the more rock side of these songs, building through verses to epic choruses delivered with an intensity and a striving for perfection as a means of connecting with the audience. Maverick's voice is strong, powerful and adds emphasis to the words that he's singing - like he's living out every word of every song and that transmits to the audience that gives them an increasing rapturous response at the end of each song.

As the main set finishes they take their bows, but they're not done yet as the audience demand more and Maverick obliges with a solo version of Faithless and Wow and it's no bold extrapolation to envisage thousands of lighters held aloft as he plays this song such is the raw basic emotion that they put into every note of what they do. Things outside anyone in the room's control might make a night like this much more difficult very soon, but Glasspop are a perfect advert for music from behind what will be a new iron curtain much closer to these shores.