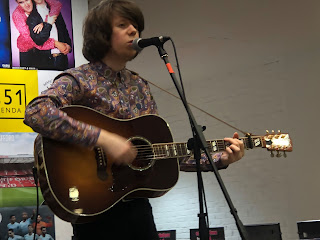 James Holt played the latest of HMV’s Live And Local showcases in their Manchester Arndale store on Saturday afternoon.

Recently James has played his biggest full band shows to date where he’s had the opportunity to expand upon the boundless ideas one of the country’s most talented young musicians has flying around his head. Today though is about stripping these songs back to their bare bones and performing them in the bright lights with nowhere to hide.

And James needs not hide. All eight songs in the set are beautifully crafted stories that feel like they’ve been slaved over meticulously, but which never feel overdone. Alone Again is sad, see the title for the reason, but in many ways feels uplifting in that recognising and dealing with it is a comfort. Do That Enough shows James broadening his horizons without ever forgetting the basics of his craft of which he is a master.

Come Out To Play is preceded by an affecting explanation of the song, a boy who refused to go out to a play as a youngster passing on sage advice to enjoy the moment to his child. James is at his best when in storyteller mode, an emotional intelligence running through the songs that give the listener a warm feeling.

Burning Moon is about receiving love you don’t deserve and again the articulate observations allied to a tune that captures the mood perfectly personify the song. Pendulum, a new song about gaining revenge, is a little darker than what’s gone before, repeating the line “again and again” at the end creating a sense of unease.

Little Green Light was James’ last single and stripped back possesses even more intimacy than its recorded version. We then get the choice between two songs and Mystery Girl wins the public vote. He finishes off a warmly received set which has Saturday shoppers stopping and listening attentively with Whatever Happened To John, the song that first brought him to wider attention. Whilst many artists release their best song first and then have the issue of following it up with something that matches it, it feels like part of the story rather than the anchor point, but still a fitting way to finish.