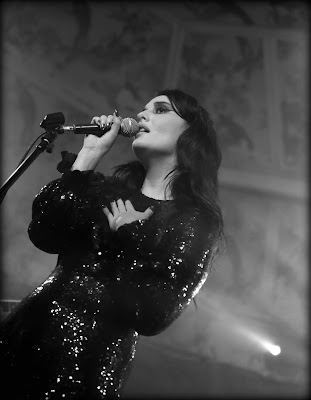 Ren Harvieu recently announced her return and her long-awaited second album after a seven year gap from her debut. To showcase the record she announced two low-key shows starting with this one at the Deaf Institute in Manchester where she revealed eight more new songs, one that's so new it isn't even on the record as well as a selection of old favourites to a besotted audience.  Support came from Pat Dam Smyth.

Pat opens up the evening with a very well-received set of seven tracks taken from his recent album The Last King. Playing as a three-piece the songs have a richness and emotional depth to them that comes from the simple quality of the songwriting. There’s no flash moves, attempts at studied cool, just straightforward articulately crafted rock and roll songs that deal in affairs of the heart and mind and the world we live in. Pat’s voice betrays a life well but modestly lived and this gives the songs a genuine sensitivity that goes beyond words and music. 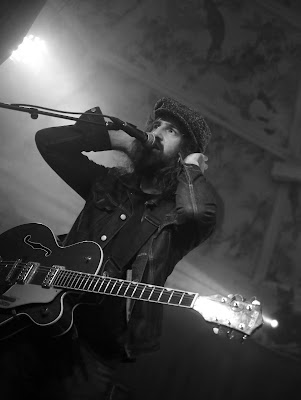 He endears himself to the Manchester crowd by calling the city “a gas” and reminiscing about watching Tom Verlaine at the Night And Day.  And he even elicits a singalong on final track Where The Light Goes as the song builds from its sparse opening into something more widescreen without losing its tender reassurance. Other highlights including opening track Juliette, a real rock and roll feel running through it, and the reflective Another World that considers there might be an alternative to the mess we find ourselves in.  By the end the crowd are completely won over.

Seven years is a long time in music. The Stone Roses only waited six years between albums, but Ren Harvieu has always promised a second album would come when she was good and ready. She's teased new songs at her rare live shows, but tonight was the first big reveal of what she's been working on, to see how her press release comments about her second album being about rediscovering the real Ren and the songs being about her rather than being written to a large extent for her translated into the reality of songs being performed to an expectant audience in a full room.

The anticipation is sky high too, Ren's on home ground tonight, although she reminds us at various points that she's a proud Salfordian rather than a Mancunian so the crowd is warm, receptive and attentive, but the sheer volume of new material is a challenge to both her and us and it's one that both sides pass with flying colours.

"I am a Salfordian chanteuse" Ren tells us at the end of opening song Forever In Blue. It's a description that fits her to a tee, she's much more than a singer with the range of emotions she can inject into a song and there are moments when she leaves us all gobsmacked by the way she seemingly effortlessly hits the high notes and drops back down without taking a breath. 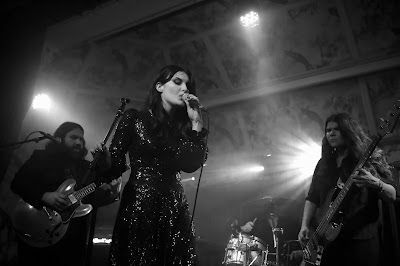 The first of the new material is This Is Our Love, described with a wry smile and laugh as being about "the dangers of falling in love, don't do it", and followed by This Is How You Make Me Feel, described as being about "the dangers in falling in lust, don't do that either." They give an insight into how Ren's second album will sound and the subject matter - they're songs about rediscovering herself, lifting herself out of the rut of being dropped after Through The Night even though it was a Top Five album and upheaval in her personal life.

Strange Thing takes her back to her teenage years and clubbing in Manchester, trying to find an elusive perfect romantic moment that didn't exist in the places she inhabited. It starts slow with just keyboards and takes us on a dramatic journey and Romeo and Michele (of The Magic Numbers) rock out behind her before the song drops back down to just keys again. It feels like both lyrically and musically it's telling the tale of a part of Ren's life, of her finding the real her and not being afraid to talk about it and express herself. She's far more chatty too, less nervous, joking about not being able to get too sweaty in her sparkling black mirrorball dress because it's borrowed. It's something she wouldn't have done seven years ago.

The old favourites naturally get the best reaction, by dint of familiarity, as the opening bars of Through The Night demonstrate. Ren tells us about those crazy times when songs uploaded to Myspace (remember that?) got her signed at nineteen and set off a crazy chain of events. 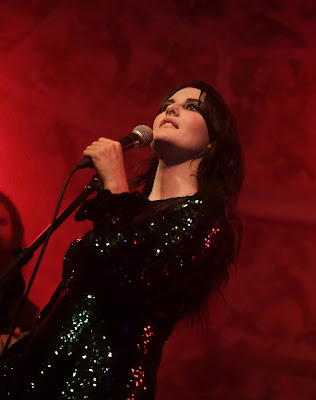 It's followed by a stripped-down version of her comeback single Teenage Mascara. Ren explains she wanted this as a comeback single because it doesn't typify what she describes as an album of intense songs and she didn't want to come back with a heartbreak ballad, but something visually striking. She finishes it with a whistle solo, to which she comments "why not?" at the end as a sign of her blossoming confidence.

That said, she tells us she's a little overwhelmed that we're all there for her before she plays what she tells us is her favourite song off her debut Do Right By Me. Cameras are held aloft to capture the moment, poignantly romantic, but among all the new material it does feel a little of its time, that Ren has moved on, her references to "a new beginning" becoming more frequent as the evening progresses.

A sign of that confidence is the way in which she changes the setlist twice on the night, bringing in two songs that weren't on the original selection. The first is a song so new that it isn't on her forthcoming album and which she doesn't introduce by name. It sounds like nothing she's ever done before, sparse at first and building very slowly, reflecting on tough love and how it makes you stronger.

Cruel Disguise is from the second record and described as a song about "female Salfordian rage." It's as unpredictable as it too, jumping from quiet section to the whole band crashing in, dropping back, leaving us uncertain as to where the song was going next, but eager to follow its path. If Through The Night was dramatic pop, the second record is going to be a much darker affair, but characterised by Ren's unmistakable and inimitable voice.

"This is a song about sex" is the introduction to Yes Please, showing a sultrier side to Ren's lyrics springing from that self-confidence that comes from rediscovering and learning to feel comfortable about who you are and where you fit again. 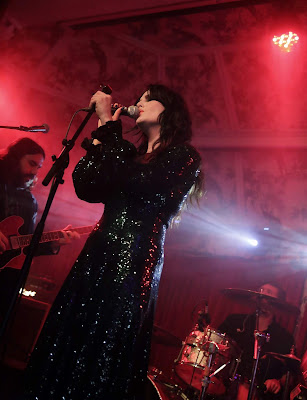 The second change to the set is prefaced by Ren explaining that her Mum booked a holiday six months ago and therefore was missing the gig so Let Me Be gets dedicated to her. The song's title tells the story of wanting to be herself and not being browbeaten into something that's she not. It's quiet and poignant, but the message is as unequivocal as the more forceful songs around it in the set. It's also telling when Romeo comments about how proud he is of Ren being confident enough to change the set around off the cuff, as all those years ago when she was thrust into the spotlight she was often so nervous you worried she might not get to the end of the set.

The main set finishes with a big singalong to the chorus of Open Up Your Arms, her debut's most accessible and radio-friendly moment. The audience react like a coiled spring to Romeo's request to take the song and Ren looks out with the hugest smile on her face at two hundred and fifty people singing it back as one. It's no surprise why she did take off and achieve success with her debut with a song like this as her ace in the pack.

After the encore break, Ren reminds us that this is a new beginning again and she promises us (and herself) that she won't go under even if it means clinging on by her fingernails. This record though feels like it is more an expression of herself, statements that she needed to make rather than being driven by the commercial aspirations of a label determined to cash in on one of the most talented vocalists of her generation.

Little Raven is our favourite of the new songs. It's where you feel she is at her most autobiographical, talking to the Ren of her difficult teenage years and telling her that she's found the magical ability to love, cry, laugh and dance (for us, like her, four of the most important things in life) - and from the balcony seats it looks like she's welling up as she sings it. She explains that she hopes it helps others in the way writing it clearly has helped her to discover just how far she's come in the last seven years.

Ren finishes with Curves And Swerves, a song she tells us was written in a time of turmoil in her life, but lyrically it feels like it's throwing down a challenge to her suitor asking him what he's going to do about who and what she is and could he live without it. As it draws to its close and the instruments drop out, she pauses, says "give me a second" before delivering the final kiss-off line "maybe I'm too much for you" as she revels in the fact that she's finally found herself, knows her true worth and isn't going to be short-changed.

The whole night is an undoubted triumph; Ren's new songs live up to all the promises she's made about them and how they reveal her journey from her teenage years and having fame cast upon her to her stepping back and discovering the real her. There are dark moments in these songs, but there's a steely confidence in her delivery that we've not seen from her in the past - and of course the impact of her voice hasn't been diluted at all, in fact it's even more evocative and revealing because she's singing her own words about her own experiences, lows and highs. It is a new beginning and an extremely exciting one.

The album is due out in March 2020 via Bella Union and Ren plays London Mirth Marvel and Maud (October 24).