TRACKS OF THE DAY : The Twilight Sad - Rats / Public Housing 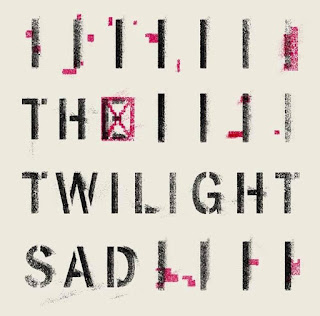 On the back of one of the albums of the year in It Won/t Be Like This All The Time, The Twilight Sad surprised us all by revealing two new songs on October 8th in the form of Rats and Public Housing.

Following a bit of teasing on social media in the prior couple of days we were alerted to an exclusive airing on the Chris Hawkins Breakfast Show on BBC Radio 6 Music of the first new song Rats.

It’s testament to The Twilight Sad that such radio stations are now wanting to get onboard with their music and it’s a bit of a risk for Chris to play something that wouldn’t be perceived as radio friendly with its heavy, dirty sound. The diehard fans love it already and it’ll be interesting to see if casual listeners catch on to it so easily.

Rats starts with the squealing, squalling sound of Andy MacFarlane’s guitar before the chaos of the sound is attacked by the drums kicking in giving it a dark, angry, industrial sounding feel. It’s this sound, captured in the early demo stage of the last album, that helped the band decide where they wanted to go on that brilliant long player.

As James sings “all you love is dead” with such disdain you know you’re entering the abyss with this one. As he often does he takes you down that path where both darkness and light await. Even in adversity there are options.

People get in dark places but it’s okay to talk about feelings, insecurities, whatever’s troubling you. It really is okay to not be okay and with Rats they tackle this issue head on.

Just like when you’re waiting for a bus and two come along at once there’s barely time to breathe and take in the brutal Rats when it’s announced Public Housing is available on all music platforms too.

This follows very much the same vein as Rats with its reverb laden assault on the ear. Andy’s customary guitar omnipresent throughout. Make no mistake these two tracks could easily have made the final cut for the album.

Johnny’s thunderous bass pokes, prods, jabs at you and makes your bones shake while the vocal of James, distorted in parts, makes the hairs on the back of your neck stand up like it always does. Never more so than when he exclaims “I’m the pain in the chest” although those insecurities are still there as he pleads “kiss me, make sure I’m alive”.

The integral cog of Brendan’s keys and the motorik drumming ensure it’s the unmistakable The Twilight Sad sound that they have created for themselves. The keys in particular enhancing the sonic landscape and painting that very bleak picture of despair, gloom and hopelessness.

We also discover it’s going to be released as a limited edition Double A-side in December via record label Rock Action although some are going to be left disappointed as there will only be 1000 individually stencilled copies for sale. These are sure to shift in no time at all with their rabid followers chomping at the bit to get their hands on a copy of this quite unique record.

The Twilight Sad's official website can be found here.