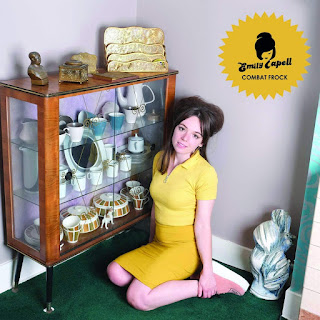 Emily Capell's debut album has been in a long-time making, but Combat Frock is more than worth the wait as the north-west Londoner delivers an album that captures on record the joyful essence of her live shows and her unique razor sharp wit, social commentary and love of a famous football bad boy.

Emily is very much a "take me as I am" girl, fiercely independent and proud of who she is and is not going to take any shit off anyone who seeks to change her. She loves The Clash, Queens Park Rangers and rhymes in her songs, hates racists and people who are too far up themselves to see how ridiculous they are and Combat Frock is twelve songs about all that and more.

Musically it's a real mix of styles too, plenty of brass and huge guitar hooks that you'll get stuck in your brain and never be able to remove however much you try. Opener 101 Walterton Road is a case in point -  a celebration of living young, tongue in cheek declaring "a phone's no use if it ain't got a charger, you're no use if you've been on the lager."

No Worries ponders the question of whether people should wear t-shirts by the likes of Nirvana and Joy Division without knowing anything about the band and their history asking "why not go out and buy an album and wear a plain white t-shirt instead", before turning to how that's minor worries when there's happier things going on in the world, the love of her family declaring - "I am the girl with the beehive that does Hit The Road Jack" before name-checking Kanye West.

Pinching And Itching is carefree in its approach, both musically and lyrically - "I was pinching and itching, I'm stealing and shoplifting, I'm just skinning up and I'm just drifting" before mocking the cult bloke following that the likes of Paul Weller have acquired. It's loose, fresh and a refreshing change to the seriousness that most bands feel like they need to be classed as genuine.

Emily's self-confidence is evident in the opening line of Bomb To The Beatles declaring "I ain't like no other girl you've met before" before challenging the rude boys to stop being rude to her. She's demanding their respect and she deserves it because she's smarter and more street-wise than those who she's addressing.

I've Found A Footballer To Marry Me betrays a little insecurity though - "and if the water runs cold, my little heart of gold will be all alone and in the dark" - but her solution is to become a WAG and live the high life, not caring for anything in the world other than the things that only money can buy. With wordplay like "I look so smart in a half and half scarf, you take the corner and I'll cheer for ya" she's displaying a clever wit that's very much tongue-in-cheek.

Who Killed Smiley Culture? is a little more dramatic and shows a range to Emily's voice that hasn't been apparent on the album so far, as well as some accented phrases that betray her North London roots.

Bonanza has been a live favourite, catchy as anything, with its opening "bon bon bon bon bonanza" opening line - musing over falling for a posh boy and whether she has the money and the  manners to be seen to be good for him - before the sax kicks in and takes the song away to another dimension. Ipso Calypso is a little more laid back, although the social commentary in the song is very observant of how people interact - "my boyfriend has got a scooter, he drives it around town, but we talk on a computer" whilst never detracting from the feeling that listening to Emily Capell is a fun experience.

Joey is Emily's tribute to ex-footballer and controversial figure Joey Barton, a folk hero in parts of the Loftus Road stands that Emily attends as a long-standing and long-suffering fan of Queens Park Rangers. Once again, the music follows the lyrics, imbuing a real sense of fun into the track as Emily repeats his name over and over again.

Twisting On The Waves might only last under two and a half minutes but is a raucous track that never slows down and lets its infectious beat drop, observing characters like "Nina is a cleaner from Harlesden way" and their interactions with each other. It's a theme that runs through this record - human interaction and her interpretation of it plays a big part across Combat Frock.

Lunatics On De Run has a calypso feel to it, the brass in the back of the mix creating an irresistible  uplifting feel to the track and Emily's heavily-accented vocal that declares "I'm a sugar plum baby, a sugar plum girl" but with the intent "I"m gunna rule the world" making sure you know she's not to be messed with.

The album finishes with Ode To Uncle Moz, a song that's rich in social commentary about royal weddings, people not voting, the music industry's obsession with ageing rockstars but which turns on the line to someone mired in that world that "who thought that Morrissey might turn out to be a racist, you should have got a tattoo lyric of Oasis."

Combat Frock captures Emily perfectly, her personality, her opinions, refusal to be silenced and desire to stand as a strong independent woman coursing through each of these songs. But it's done with an intelligence and wit that makes her stand out from the crowd and which pays tribute to her musical heroes.