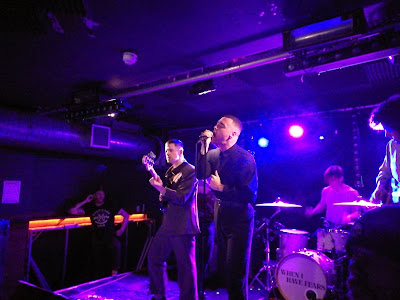 The Murder Capital's first sold-out Scottish headline show at Edinburgh's intimate Mash House venue ended up feeling more like an out-of-body experience, forty-five minutes of the most powerful antidote to both personal and the world's ills, an opportunity to lose yourself and immerse yourself in the most potent medicine - love. Support came from Brighton's Happy Couple.

Happy Couple are a perfect opening band for The Murder Capital as they learn their trade playing to the biggest audiences of their short career to date. They're growing in confidence because of the reception they're getting, they're getting that reception because their dark feedback heavy sound is laced with subtle beauty. The guitars, turned up to the brink of distortion, are like the big black clouds that part to reveal the sun when they drop out and Lena's voice takes centre stage, rich and expressive, but leaving you uncertain as whether you can trust it when you listen more closely to the words. 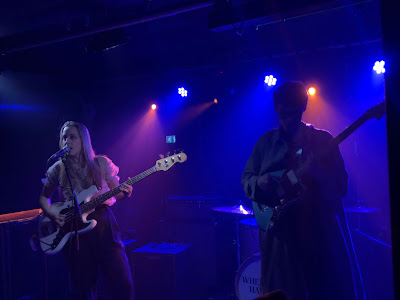 They're a band you need to immerse yourself in, not one for an easy listen, but it's credit to the Edinburgh crowd that have filled the room early, and of course to Happy Couple's ability to hold an audience's attention, that they do listen. With only one single to their name, this tour is very much about getting their names out there - and with performances like this, they're certainly doing that.

Edinburgh has a reputation for restrained audiences and low attendances which is why bands often prefer to play Glasgow instead of the capital. The Murder Capital blow those notions away over fifty minutes in which they implore the crowd to lose themselves in the music, connect with them and with the people around them and to immerse themselves in the healing catharsis of a rock and roll show.

The drone of effects pedals signals their entrance, one by one, Gabe pulling faces at the crowd, looking out as us teasing what's to come as Diarmuid and Damien start Slow Dance I and we wait in anticipation of James' entrance, last minute as usual, to deliver the first lesson of the evening. Whilst it might lack the sheer force of will and adrenaline of what comes later, Slow Dance offers a tantalising insight into how The Murder Capital can command the pace and tone of an evening with them and why there's so many exciting possibilities on how they might develop their sound in future. The vocals are desperate, James declaring "I let it wash over my head" with a doomed sense of recognition, but somehow the act of performing these songs in front of an audience feels like part of a healing process for all of us as we take little pieces of the song and relate them to our own lives. As the drums take the lead as it transforms into the instrumental Slow Dance II, James leaves the stage and leans against the barrier in front of us to be hugged by those close enough to connect before he sits down and watches with the same awe we do as his friends take the song off into the distance.

On Twisted Ground is preceded by James' question "what's the fucking craic?" to a rapturous roar that causes James to quip that it translates. He tells us the rest of the band are his best mates and that we should never ever take it for granted and forget how lucky we are to have the friends we have. Once again the audience pay it absolute respect as the sparse spindly bass silences the room, the tension is unbearable, people cry, one of them consoled by James who jumps off the stage to hug him whilst the band take the song round another cycle to allow the embrace. The almost out of tune bass makes it somehow more poignant tonight as we hear the emotional crackle in James' voice more pronounced tonight than before. To perform a song with this level of delving into the very darkest events life can throw at you each night takes incredible bravery, five young men teaching us all how to open ourselves up and save us from further devastation. 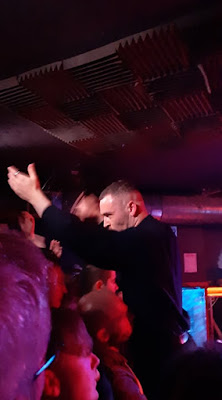 There's barely time to catch breath and compose ourselves again as the opening drum beat to Love Love Love, which sounds and feels like a heartbeat as the bass makes us shake and James declares "it's all about love, the whole thing" and in seven words he hits the nail firmly on the head and obliterates it. He prowls the stage, mouthing words to himself, approaching one of his brothers to look them in the eye then turning to us. The crowd as one are under a spell.

"Is everyone out there alive, this is it now" James asks and tells us as the long intro into Green And Blue kicks in. The crowd, attentive and present just ten minutes ago, are now lost in the world The Murder Capital have created, a place where it's OK to be not OK as long as you talk about it as your friends are there to get you through it. The curtains on the dark place that On Twisted Ground inhabited are opened by the healing power of the love between the five boys on stage and their ability to communicate that to us. This is the sort of connection that saves lives - on and off stage.

Don't Cling To Life threatens to lay the place to waste, the speakers look like they're about to topple over such is the way they're moving. "When someone we love dies, we cry then we celebrate their life, immediately, that's how we deal with it" is how James introduces it and it's one of the most powerful messages that you're ever likely to hear. The song is gone in the blink of an eyelid, two and a half minutes of submitting yourself and losing yourself in a safe space away from the horror and realities of the pain of loss.

"Prove yourself" James demands of us, then he's down on the barrier, back arched over the front rows as he's covered in a sea of arms that then release him and start to clap in time with Diarmuid's beat. By the end, the audience take the song from them, James winks at us as a couple of hundred voices belt back the simple mantra "For everything, for nothing."

The chaos gets wilder as James demands that Edinburgh give them more. James ends up amongst us, lifted up on a sea of arms, Damien joins him, but ends up being dropped to his feet and lost in a  sea of bodies, whilst Gabe has somehow managed to climb onto one of the vibrating speakers. James stops to let us sing "and I love it" at one point, to draw breath and survey the mass of bodies joined as one in front of him.

There's just time for one more song. Less is more. They pause, the band silent for ten seconds as James starts Feeling Fades before the others come in and the audience find whatever energy is left in their spent bodies for a final five minutes of exorcism of the demons. Gabe ends up in the pit between stage and barrier, returning to the stage to a knowing wink from James, before James is back amongst us, being lifted up, holding on to the pipes attached to the ceiling surveying everything below him as his brothers create a screeching tsunami of sound that little resembles the recorded version of the song as everyone screams the "la la la la la la" refrain with whatever voices they have left.

Then they're gone. James lingers to take in the love from the front rows. He looks exhausted, we are exhausted, totally consumed by what we've just witnessed, a band that thrives off the connections they make, deepening the ones between them and creating new ones with an audience that's powerless to stop themselves falling under their spell. The greatest love comes from the darkest place and that's the world that The Murder Capital inhabit and their message is the most important one you're likely to hear.