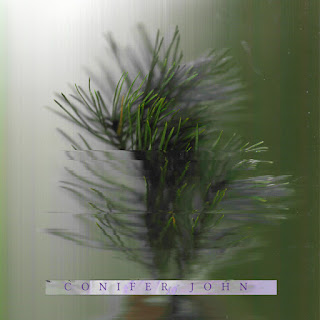 Walden Pond is the lead track from the mysterious Conifer John's self-titled debut album that is released this Friday to coincide with a launch show at Salford St Philip's Church.

The song is described on Conifer John's blog as "Sorrow only really works when there’s hope first, which is why breakups are so sore. The biggest grief is maybe the loss of the future you’d been prefiguring for years and being unbound is liberating and destabilising. There’s a lot to dismantle, that is if it doesn’t crumble of its own accord and send you sliding down the scree. I’m comforted by nature (Comfier Conifer John) and going back to the basics of my conception of myself: family, friends, childhood. And also by venting steam into songs. If nothing comes back to me from them, at least there’s a little less on my chest, or that’s the idea."

It's an experimental track, one that never stays in the same place, unusual instrumentation and sampling running through it and subtly treated vocals sitting dead centre musing over the meaning of life and love.

Conifer John is on Facebook and the blog can be found here.

Tickets for the launch gig are available from Skiddle.