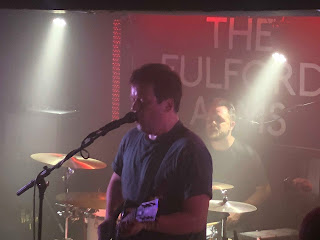 Ist Ist concluded their UK tour with their first ever show in York at the Fulford Arms on Saturday night, supported by an impressive line-up of The Black Lagoons, Eugene Gorgeous and West Wickhams.

It's our first visit to the Fulford Arms and we're very impressed. From the outside it looks like any other pub on a main road out of the city, but inside it's one of the best small venues we've ever been to. Sound and lighting is superior to venues much bigger and celebrated, the staff friendly and welcoming, a bill selected so that there's some crossover and the touring band has an audience other than their own and there's none of the kicking you out the minute the band have finished either. These are the sort of gems that music lovers should cherish, because they're becoming less and less. 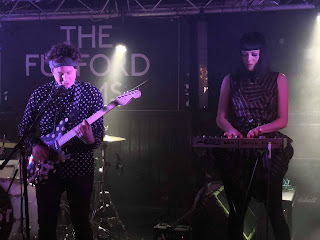 Opening up proceedings are duo West Wickhams, who describe themselves as "psychédélique garage noir" and their mix of live guitars and keyboards and a backing track creates that image perfectly. The guitars have an edge to them, close to distortion and there's portents of impending doom in the vocals, with lyrics about drugs (Kick The Habit), the Death Of Madonna and the intriguingly titled He's Acquired A New Face. Visually there's a contrast between the vocalist who is living these songs out in front of us and the studied cool of the keyboard player that keeps the audience engaged with them - and their final song Goathland is probably the best of the lot. 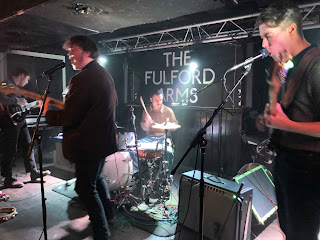 Eugene Gorgeous are up next and the four-piece have brought a healthy following with them and it's immediately evident why. There's a huge infectious energy to their set, led from the front by lead singer Paddy who loses himself in songs like Patchy, Swamp ("a song about swamps") and the thrilling set closer I Say. They manage to fuse lo-fi post-punk sounds with something more traditionally rock and roll, often in the same song, and keeping the join lines between the two invisible and inaudible to us. As their set comes to a close, with three of them crouched down and them somehow making guitars and drums sound like machine gun fire, they get a deserved rapturous response from both their own partisan audience and those watching them for the first time. 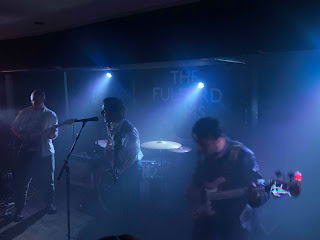 Black Lagoons are next up, another local band with a strong following and their approach is a different one. They produce huge imposing soundscapes that don't need vocals at times, the four of them lost in the music they're creating. In Your Teeth from last year's Illusions, Incoherence and Fever album is impressively intense and claustrophobic, whilst Walk and their seven-minute set closer Delirium, both also from the EP, showcase them broadening their horizons and spreading their wings. This expansive approach serves them well as the drama inherent in the songs and the energy in their performance draws people in and holds them in their sight lines. 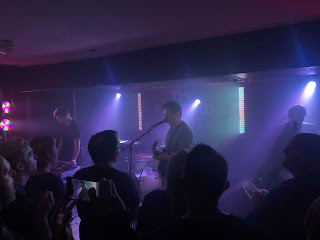 This is the final night of Ist Ist's UK tour and they're on a roll, you could transplant a performance like this onto the stage at somewhere like The Ritz or Albert Hall back home in Manchester and they wouldn't look or sound out of place. The venue's impressive sound allows us to hear all the subtle nuances in Mat's trickery with his keyboards and box of tricks and in Adam's guitar playing that often get lost in muddied sound.

They start with You're Mine, one of three as yet unreleased songs alongside the claustrophobic clawing Under Your Skin and Black, and it hits the mark straight away; bold, confident and imposing. Jennifer's Lips and Son Is The Father similarly soar at just the right moment and lift you up and carry you on the weight of their broad shoulders. They can also slow it down, as demonstrated on a tender fragile I Want To Disappear where the tension in these songs is at its most palpable.

Emily is one of the survivors of the earliest days of the band, but it still feels like it has a lot of legs left in it despite them having an album's worth of new material at their disposal, of which we only get a tempting glance at tonight. What Ist Ist have done is to evolve into a band that can stay true to their ideals, but have opened themselves up to allow the audience to take these songs from them and make them their own - something we could never have imagined in those early days where brute force was their weapon of choice.  It's evidenced later on Strangers, Silence and Exist where the crowd lose themselves in the music and threaten to take it off the band - and there's a real feeling that they're on the cusp on something big happening.

Night's Arm and Preacher's Warning are possessed with menacing threat, delivered through Andy's low-slung bass and Adam's increasingly impressive baritone vocals which provide his words with a richness and depth that underline and set them in bold, heightening the impact. When Andy and drummer Joel add backing vocals to the choruses of Strangers and Silence, it lifts them up even further.

It's a fittingly triumphant sign-off to a tour that has seen Ist Ist's audience grow further with decent turn outs in cities they're visiting for the first time and growing crowds in places they've revisited. It feels like there's a real momentum growing, both on and off the stage, which soon might become unstoppable.

Ist Ist played You're Mine, Jennifer's Lips, Son Is The Father, I Want To Disappear, Emily, Under Your Skin, Night's Arm, Preacher's Warning, I'm Not Here, Exist, Undignified, Strangers, Black and Silence.