The Slow Readers Club - Live At The O2 Apollo Manchester 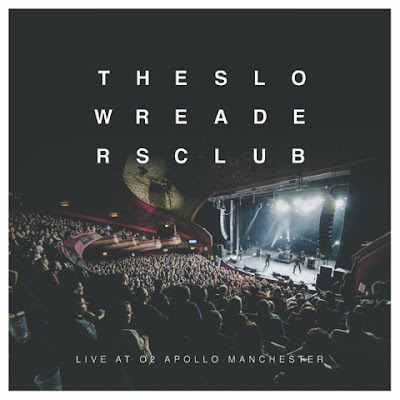 For years those in the know shouted from the rooftops that The Slow Readers Club were made to fill out venues like the Apollo yet no one really believed that it would ever come to pass. But for the magic of word of mouth, and of course a set full of songs across three albums that could have been written with this hallowed space in mind, it happened in December 2018 and sold out three months in advance. Ten months on and that magical night has been captured for posterity on CD / DVD and vinyl - and it's like the musical equivalent of a This Is Your Life episode played out in front of three and a half thousand adoring fans.

That you can hear the "READERS" chant that has become omnipotent at their shows and wherever two fans of the band knowingly cross paths at the end of every single song tells you of the adulation that follows this band around these days. It's one thing to create a record that people buy, and the top twenty album chart position for their third album Build A Tower showed that against the odds The Slow Readers Club could do that, but it's another to pack out the Apollo and create a night where new fans and old came together to celebrate the rise of a modest hard-working band with a knack of writing songs that stick in your head to the most prestigious venue in this famous musical city.

This live album is effectively a "greatest hits so far" collection performed in an environment where The Slow Readers Club thrive. Their debut self-titled album might have slipped out via their website at the end of 2011, but the songs from it - Sirens, One More Minute (dedicated to the "twenty or so who were there all along", Lost Boys, Block Out The Sun and Feet On Fire - are just as anthemic and powerful here as the songs that made them their breakthrough onto radio and into the hearts of thousands and thousands of people. You can hear the roar as deafening at the end of those songs and those off Cavalcade as loud as you can the ones off Build A Tower where many joined the journey - testament to the fact that you don't just become a fan of this band, you submerge yourself into everything they've done and the history is like a treasure chest waiting to be discovered.

That the twenty songs on this record feel like the unveiling of a greatest hits set is unequivocal proof of the songwriting capabilities and quality control of The Slow Readers Club. There's no filler here, each song is a bonafide anthem in its own right, each one with their DNA coursing through it, but each one different and with its own personality. From the euphoric Forever In Your Debt, Plant The Seed and You Opened Up My Heart where the crowd take the song and sing back the guitar lines at a volume that threatens to drown out the room to the more considered Cavalcade and Through The Shadows, any of them could, or should, have been a hit single or an A-playlisted radio favourite.

It's not just a case of them turning up and repeating the album tracks verbatim, you can hear in Aaron's voice a range that isn't always evident on the recorded versions where they strive for a perfect take. Here you can hear the emotion, and nervous energy, crackling in the voice in the way the very best live albums and when Kurtis joins in on Lost Boys, you can hear the roar of appreciation from the crowd. You might not have been in the room when this happened, but close your eyes and it'll feel you've been transported there.

The duo of I Saw A Ghost and On The TV that complete the encore at the end of the night confirm the magical bond that the band have formed with their audience, both songs being taken off the band who sing instrumental parts of the songs back to them in a way more established and celebrated artists can only look on and jealously admire. That euphoria peaks at the end but it runs all the way through this record - the Readers fan base might not be the coolest or youngest around, but what this record demonstrates is that music is about forming a connection and you can hear it in every interaction, every moment where the band isn't making music.

When Aaron says before the final song On The TV, he tells us "it's a dream come true" you know it's not the usual glib comment a band makes at the end of a set. This genuinely is a moment where a band reached heights it could previously only have dreamed of when they were opening a four-band bill at The Castle across town to ten people just three and a half years earlier. They always had the potential for this, but Live At The Apollo is more than just a perfect capture of a moment, of a band at the peak of its power, it's an inspiration to any band with a rock steady belief in what they do that dreams can come true. It ends with bassist Jim telling us to bring a friend next time to make this even bigger next time round.  In one sense their hard work starts now given this sets the bar of future expectations so high.

The album is released on October 25 on a 2CD/DVD or 2LP/DVD package plus digital downloads and the band will be holding an intimate launch event on November 7 at an as-yet-unannounced Manchester venue with tickets available to ballot winners who order the album via the official website.

Our review of the momentous night last December can be found here.