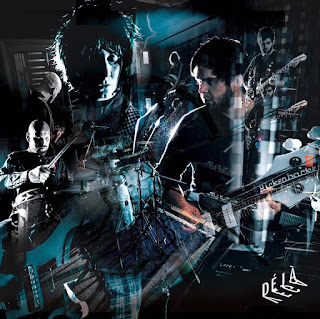 Déjà Vega's long-awaited debut album finally sees the light of day this week, just as they start to sell out bigger and bigger venues across Manchester and further afield. Including many of the singles that have helped to grow that following, the album captures one of the country's most exhilarating live bands and commits them to long-play vinyl for the very first time whilst still maintaining the excitement and energy of the live shows.

The album opens with Telephone Voice, starting in a ball of feedback before the drums kick in and the crisp production on the album very quickly becomes evident. Being a three piece affords them a lot of space and it's replicated on the record as effectively as it is at their live shows. Mike's bass underpins the track and Jack's guitars ride over the top, not omnipotent but coming in to give maximum impact. Like the very best of Déjà Vega's work, it's characterised by a refusal to stand still, rest on its laurels, forever darting from one idea to the next, stopping then resuscitating itself at the end.

It's followed by live favourite Eyes Of Steel. There's a real urgency to this that anyone who has seen them live will immediately recognise, the furious energy in Jack's vocal delivery and the guitar riffs providing a thrilling contrast to Mike and Tom's bass and drums that lock themselves around it and ensure they don't career off the rails. It feels like it's on the edge, something that often gets lost in the translation from stage to studio. For a band that has built its reputation on the former it's even more impressive that they've achieved it.

Another live favourite Mr Powder has that schizophrenic energy running through it, an inability to remain facing in the same direction, accelerating for a few seconds before stepping back and waiting for the next foot down on the pedal and the next burst at breakneck speed. When it hits the breakdown, it feels like they're letting loose on the song for the first time rather than having had it in their set for a few years - there's an angry intensity in the music and a mischievous edge to Jack's vocals as it twists and turns in the chorus.

Chasing is the only sub-three minute track on the album and takes us off in a different direction. Perhaps the most accessible song of the eleven on the record, particularly in the verses, it refuses to allow itself to be pigeon-holed, Jack musing on trying to win back the heart of a loved one declaring "stood in the rain for love, I'm feeling lonely." As it hits the breakdown it soars upwards, tight and claustrophobic before stopping dead in its track leaving us wondering the outcome.

Vor Gazen sees them slowing things down, the song building up behind a guitar hook that's far less aggressive and forthright than what's proceeds it. It shows that Déjà Vega are able to master songs that don't just hurtle towards you but can trade in these more subtle restrained moments without losing your attention.

Friends In High Places and Pentagrams were Déjà Vega's first two singles back in 2016 and 2015 respectively, but they still retain a freshness here because of the raw energy than runs through every little sinew of these songs which the band's playing and the production together perfectly capture. They lift you and carry you aloft on their shoulders whether you've seen them played live a dozen times or are hearing them for the first time. Close your eyes and you could be in the room with them as they're playing these songs live in front of you - this is a record you need to stop whatever you're doing and listen to rather than have on in the background.

They move into more experimental territory on The Ballad Of Alfred Hitchcock with a sampled young girl's voice, guitars put through distortion effects and the bass turned up in the mix before Jack half sings half speaks his mysterious words that feel laced with an unspoken threat. Like Sound Of Speed and Seeing Double that follow it, the song won't be that familiar even to those who've surveyed their journey since they became a three-piece and changed their name from Deadbeat Echoes to Déjà Vega in 2013. It's a story for another time how much new material they've written and started to perform since this album was recorded, but what it opens up to us on side two means that we're not just listening to a studio version of their live set.

Sound Of Speed feels the most like a traditional alternative / indie track of the whole album because it has the most rigid and regular structure yet it still bears all the characteristics of this extraordinary band, the intuitive feel of the music as the three of them lock into the song's powerful groove and use the breakdown to start to take the song off on its winding path. Seeing Double's opening riff, stop-start first verse and Jack's vocal are the record's quietest moments until the guitars kick in and lift it up, a second riff repeating and inserting it into your sub-conscious refusing to budge before it ends in a roll of drums that repeats like the most banging of migraines and a wall of distorted guitar. It demonstrates that Déjà Vega have the mastery to take control whatever the volume or pace of a song and have you intoxicated and spellbound by their art.

The album finishes with The Test, their perennial set-closer, often stretching to well over ten minutes, never sounding the same, often improvised and the song that has done more than the others to cement that live reputation that proceeds them. Capturing that in five minutes in the studio is a practically impossible ask, but what Déjà Vega do is create a toned-down version of the live beast that retains most of its characteristics - the effects routed through the pedals, the incessant repetitive drumming that provides the concrete in which they set their feet and the guitars taking you off on a head-spinning journey well away from where you started the journey.

Déjà Vega is a spectacular capture of a band that has forged its reputation in hot sweaty small rooms and distills all the vital elements of that into fifty minutes. Like all great bands they've already moved on playing live, half their sets comprising of music written since this album was completed (and subsequently delayed by record label issues), but it's an unquestionable triumph for a band with an almost religious sense of purpose and complete certainty in their own identity and documents their first phase to perfection.