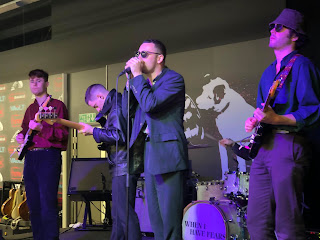 The Murder Capital played a short but bittersweet four-song set to help celebrate the opening of HMV's new Birmingham Vault store on Saturday lunchtime, setting up the surreal sight of a band celebrated for its dark intensity playing to a well-lit warehouse of Saturday shoppers.

The Vault is a sprawling store and will be even more so when it's finished and the set-up for in-store shows is impressive - with a few provisos. There's a moment at the start of On Twisted Ground, their most intimate moment about death and loving your friends, where two pensioners discuss the sizing of a KISS t-shirt about ten feet away from the band - the contrast providing a lasting memory of this surreal set and a note to the store to create at least some kind of separation between audience and shoppers.

The Murder Capital's schedule is a gruelling one, only thirteen hours earlier they'd come off stage in Brighton and once this UK tour is complete they head to Europe for a month. You'd forgive them for being agitated and tired and turning up and going through the motions, but they can't. They start with Slow Dance, their two-part swirling waltz that builds through effects pedals as the guitars intensify the desperation in the lyrics which a shaded-up James is probably living through at the moment he's singing it with just hours of sleep and no time to rest. As it hits the segue into Part II of the song he takes off, walks off the side of the stage and disappears into the store amongst the customers, leaving his band mates to take the song off into the stratosphere.

He returns as they finish and we're surprised by the choice of On Twisted Ground - it's a moment to close your eyes and forget where you are, what you're surrounded by and remember what really matters. It's the ultimate contrast between the things that really matter in life and shiny things that help make the outcomes a little more bearable, and you sense frustration that people are going about their business while they're pouring their hearts out.

Their final song is the album's closer Love Love Love, James hammering the tambourine like he's attempting to expel every toxic thought from his body before sending it skidding across the floor. You sense they feed off the audience reaction to these songs and in here there isn't much of that happening, reticence because of the bright lights and life going around us. He stands stock still in the instrumental section, shaking all over, waiting for his moment to come back and as the song hits the final "goodbye" he speaks it with power and force, sends the mic stand down onto the barrier and leaves. As one, as the song finishes, the rest of the band follow him, held together by an invisible bond, five brothers as one.

We suspect they were due to play longer, the set giving us an indication of that given they didn't play any of the album's singles, but in that moment they confirmed, if there were any doubt, that this is a band that is living and creating on the edge, needing us as much as we need them, and that their live shows are far more than a performance, the interaction and the love are as important as the oxygen in our lungs and the blood in our veins and that is something you simply can't fake.