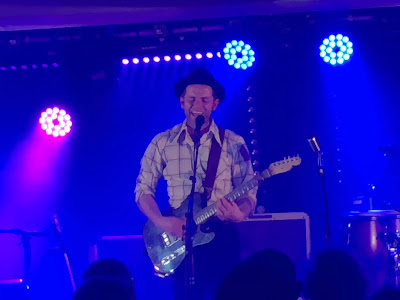 David Ford brought his latest one man tour to the intimate setting of Kendal Brewery Arts Centre on Thursday night for a career spanning set with his latest invention allowing him to loop multiple instruments and build songs from the ground up.  Support came from American singer-songwriter Abe Partridge, who was full of interesting stories and rich emotional songs.

Abe Partridge has lived life. He became a pastor at 25, joined the military and then decided to become in his own words "a rock and roll fundamentalist" to tell his stories through his songs. It's unlikely anyone in the room, other than those that did their research for the show, will have heard of him previously, but by the end he had the crowd enthralled by both his songs and the way in which he engaged with us.

He charms the locals immediately by telling them that Kendal is his favourite place he's visited on this tour, all of which are new to him, because it's less busy. He continues this by explaining the stories and context behind his songs as he goes along - a true raconteur. His Alabama drawl is very evident in his singing, but that simply adds to their impact, giving the songs a richness and depth to them, a sense that they've been lived in. 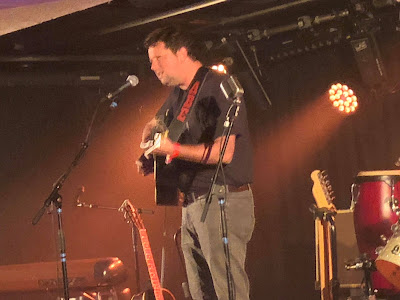 From their titles - such as Our Babies Will Never Grow Up To Be Astronauts and Abe Partridge's Freak Out Part 403 - the songs betray an emotional intelligence and world view that only comes from having lived life through hard times and come out the other side. The latter ponders on the question of what The Beatles would sound like if it was Einstein and McCartney rather than Lennon, as he details the workings of his mind as he tries to retain his sanity.  Out Of Alabama Blues tells of the time he won a blues contest despite not being a blues singer and being sent to a national competiton in Memphis, whilst Preaching Blues goes back to his earlier life as a preacher and what it taught him. He finishes on his most popular song (which he jokes has had 50k plays on Spotify earning him "tens of dollars") Colors and by that point he's charmed most of the audience.

Every time you see David Ford you get a different show. Last time he was on tour it was an acoustic tour, one man and his guitar. For this tour it's still one man but accompanied by drums, bongos, shakers, pianos and a number of guitars and microphones, all of which come into play during the course of the set with a loop machine he built himself.

The songs change too. He opens up with Why Don't You Answer Your Telephone from his last album Animal Spirits. It's dark, brooding and increasingly fraught and agitated as the guitar appears to be cranked up as the song progresses and drums, shakers and piano are looped back in at the appropriate moment to heighten the impact of the song and to help build the tension and tell the story. It's something that requires impressive control of everything that's going on and a mix of intuition and precision.

David's promised us already old songs and new and Isn't It Strange, from 2013's Charge album, makes a welcome return. It's a wistful and reflective song and David's vocals manage to portray the emotions of the song perfectly, something that he does much more emphatically on Go To Hell, the opening track on his second album Songs From The Road, which follows, making a long overdue return to the setlist. The anger grows as the guitar gets louder and the looped parts come back in.

He's in reflective mood on O'Sullivan's Jukebox, a song played solely on piano, explaining to us that the song is a tribute to the bar where he used to go and drink as a teenager in his native Eastbourne where all his money went on Guinness and the best jukebox in town. He ponders on all the things he could have become had life's dice been rolled and landed on a different number.

He jokes that One Of These Days is the only sad song in the set, despite the fact he claims to often be accused of writing only sad miserable songs, yet in his delivery he makes it feel like a "what might have been" rather than a maudlin bleak assessment of the situation of the song. Don't Tell Me, from his debut I Sincerely Apologise For All The Trouble I've Caused, actually feels sadder because of its bleak self-assessment and resignation to his lot at the time it was written. 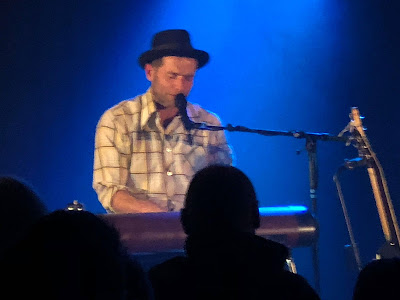 Waiting For The Storm, also from Charge, has retained its place in most of David's sets more than most of his now impressively large back catalogue. He jokes that he thought he'd ripped someone off when the song came formed in twenty minutes given the time it usually takes him to write a song, but that no one had complained or been able to tell him who. He stops as the guitar isn't quite in tune and tells us, with a sense of sarcasm in his voice, it's his professionalism that doesn't allow him to continue. You can never quite tell whether he's being totally serious.

"This song is about banking legislation in the US enacted in 1934 and repealed by the Clinton administration" might be one of the most unusual song introductions we've ever heard, but his Animal Spirits album from Carter, Henry, Get Your Hands Off Me! came is a study in how macroeconomics and the human condition are very closely aligned and the former can explain a lot about the latter. It's hard-edged, guitar cranked right up and delivered with a passion for the subject matter stronger than most people impacted by it.

David recently release a three-track EP, the first in a series of reinterpretations of other people's songs, and he plays one of them tonight - a piano cover of Boys Of Summer that takes the original, slows it down, replaces the guitars with something a little more sedate achieving his intention of showcasing the basic beauty of the song.

The Ballad Of Miss Lily, again from Charge, is another song that seems to be a personal favourite, yet each tour he changes the way he plays it so that it never becomes stale and boring. Here it has a long intro as the loops are created and in the middle section he belts out some high notes that we previously didn't know were within him.

His penultimate song is the final track from Animal Spirits - I've Lost More Than I Ever Thought I Would Hold - a track that he says needs love as it's the smallest song on the album and emphasising its subject matter - deciding that love is more important than money. It's beautifully simple in its structure and delivery, like many of the most impactful songs.

He gives us a choice on what we want him to finish on - something quiet or something quiet that builds to loud, which to us is a straight choice between Song For The Road and State Of The Union, probably his two best-known and best-loved tracks. The almost unanimous decision from the crowd (not us) was for Song For The Road, reflective of the fact we're seated and a piano song with an uplifting love of life theme to it feels like a fitting end to the night. It concludes another different and unique experience with a songwriter and performer who's long resigned himself to the fact that the industry has passed him over, or he's excluded himself, for stardom and this is the life he wants to live, yet who still constantly delivers live shows of the highest quality with a warmth, humour and joy that stands out from the crowd.