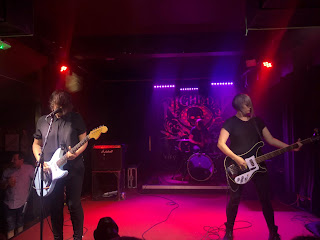 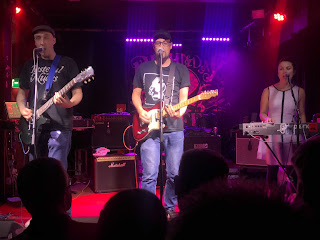 LIINES and Bis's three-date tour rolled into Manchester for its second night and the sold-out signs had been posted weeks in advance. A packed crowd braved the Night And Day's usual sweatbox atmosphere on packed nights to witness two bands with contrasting styles but very similar ethos deliver two rapturously received sets.

If you told us twenty-three years ago that we'd be listening to Bis playing Kandy Pop and School Disco in the Night And Day we'd have probably looked at you like you were crazy. They were brilliant back then, yet much derided by the press as not being cool enough to stand alongside even the lower-tier bands that caught a ride on the tails of Britpop. But Bis were fun, in many respects they didn't take themselves too seriously, but they took their music seriously and those songs have stood the test of time. There might not be quite the same energy in those songs now as there was back again, but it comes pretty damn close. 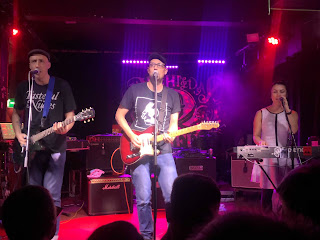 There's new material in their set too - three songs from their first record since 2014 and only their second this century called Slight Disconnects - and it sounds like you'd expect Bis to sound when they were older and wiser. It still has the euphoric and seemingly boundless energy that the trio of Manda Rin, John Disco and Sci-Fi Steven have always had - and when Manda's high-pitched urgent voice hits against the others' deeper vocals, the reaction is a potent one that sets the front rows off dancing, whether it be the old or the new.

They jump around their career with the setlist, including the likes of Icky Poo Air Raid and Clockwork Punk from the seemingly endless series of EPs and split singles they did at the start of their career merging in with the likes of Eurodisco, the set-closer Kill Yr Boyfriend and Action And Drama as they play most of their crowd-pleasing singles. They were humble enough to swap the stage order around tonight to allow LIINES to headline their hometown, but they certainly delivered a set that made it feel and was received like the co-headline tour this was billed as. If they were a guilty pleasure back then, they still are now.

There's a real sense of anticipation in the room from LIINES fans old and new as they've promised they will be playing new songs - eight in total if you include recent single On And On - and their longest ever set, weighing in at a mammoth seventeen songs. There's something about when they play the Night And Day that makes the gigs there seem more magical than anywhere else - maybe it's the fact that the venue might be not be the coolest place in town, but it's one of the favourites of the established Manchester gig-goer for exactly that reason and in their own way so are LIINES.

They start with a new song Keep On Going and it shows that they mean business with their second album that they're in the process of writing. It takes all the best parts of Stop / Start, keeps them and starts to develop into something more powerful and driven, exploring new avenues of sound on the periphery of what they've done before. Evolution not revolution. It goes down a storm and as they reveal the likes of Another Start, Choke, Look For You and Sorry, each one of them confirms that initial impression - where Stop / Start was tight and edgy, the new material bursts out of those confines and finds its own space. 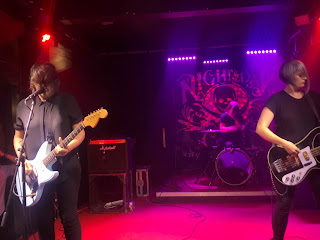 Musically you can see what the huge tour they did with Sleaford Mods has done for them. They're now supremely confident, shrugging off technical issues that threaten to, but never manage to derail them. Between songs as well Zoe says there's a reason she hardly ever speaks after commenting about her shirt's top button coming undone in the heat, but it's engaging and genuine and the crowd respond to it. When they thank the promoter, Bis and the crowd (Zoe telling us the night has made her proud to be Northern), it's heartfelt and sincere - something that LIINES apply to every interaction with their audience whether it be musical or otherwise.

The older songs in the set from Stop / Start are boosted by the youthful energy of the new material around them. Disappear, Be Here, Blackout and Find Something were all singles before the debut album but here they feel like they've been injected with steroids and bulked out as Leila's drums dictate the pace and Tamsin's bass often the direction of the songs, allowing an almost breathless Zoe to deliver both her rasping vocals that betray the fact she's laying everything out on the line in these songs as well as violent guitar riffs that emphasise the right at the bone nature of these songs.

They finish with Never There, still as powerful and potent as ever, and the one-line Not Afraid that shows you don't need verses and choruses to create impact if you know what you're doing. LIINES momentum is growing again, having been on Granada News earlier in the day and having the presenter Elaine Wilcox in amongst the dancing bodies in front of them tonight too as a genuine fan for example. But they're getting better and better where it really matters - on stage and in the new material they're writing - and tonight demonstrates both in spades.

LIINES and Bis play together at Glasgow Mono on Sunday (October 13).