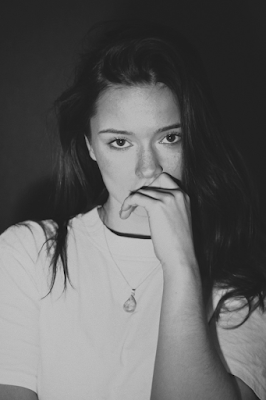 Ellysse Mason releases her new single Something Good on Friday accompanied by her own lockdown video. We caught up for a chat about her musical roots, her influences, making the video and progress on her debut album.

Could you introduce yourself and tell us a little about how you got into music?

Hey! I'm Ellysse. I'm a Manchester based singer/songwriter. I started playing guitar when I was about 13, and I started writing songs soon after I learned my first cover, which was I Kissed A Girl by Katy Perry. Amazing as she is, this was not what got me started in music though. I was on a family holiday not long before I started playing guitar and my grandma put on a DVD of Jack Johnson playing live in Hawaii (or somewhere sunny) and I thought to myself, "that's what I wanna do'. He really inspired me to become an acoustic artist and finding people like Joni Mitchell and Taylor Swift along the way made that decision even more concrete. That's where I started off. However, over the years my taste and writing style have moved a bit toward the more electronic end of the spectrum.

Has this been a conscious move or are just following the music that inspires you?

Absolutely following the music that inspires me. I've found more and more over the last couple of years that I'm drawn to artists like Aurora, Lana Del Rey, Billie Eilish etc. I've also developed a real soft spot for 80's music, all the synths and bass lines and up beat drums, the feel good vibes that you get from it.

You play both solo and with a band.  Could you introduce your band and how you came to work together?

The band came together around the launch show for my last EP in late 2018. I was friends with the Bassist (Alastair Dickie) and Keys player (Ollie Walton) for a while before I asked them to play for me, we knew each other from the Manchester scene. Luckily Ollie is a graduate of RNCM and knows some of the best musicians in the country, that's how we got James (Vezer - guitars) and Cam (Easton - Drums) involved.They're all AMAZING players and really fun guys too (if a bit goofy at times!)

Do you find having the option to play solo or with the band allows to give different insights into your music - are there certain songs that work better in one set-up than the other?

Yeah I love having loads of different option on how to express the songs live. My background has been "solo/acoustic guitar" for years, but now I can do that if I want or jump on the electric (which I'm loving these days), or play a duo set up with Ollie (keys), or have the full band for bigger shows and festivals.

The best thing about having the band, is that when I'm working on the new tracks in the studio with my producer (Mathieu Garcia) and we build some huge beat or have loads of synths or a mad bass line, we know that the guys will be there to help bring that to life on stage. I really can't wait to go on tour with the boys and do a full festival season next Summer (fingers crossed!).

Because I write all the songs at home first, on either guitar or keys, I find that they pretty much work in all formats, but obviously the more upbeat ones tend (not always) to work better with the band. It's just fun figuring it all out as we go along!

How are you coping with the lockdown - and how is it impacting on your creativity?

Lockdown has been WEEEEIRD. As I'm sure it has for everyone. But the silver lining has been that I've had 100% of my time to myself and have been able to focus SO much more on the release of my next single. I've been upping my Insta game too (just like everyone else in the world it feels like) and I'm doing live streams from my page every Friday night now which is great fun! (And quickly becoming more and more whiskey based!)

Your new single Something Good is out on Friday.  Would you be able to give us a little insight into the meaning of the song?

To be honest it's probably hard to tell from the sound of the track as it's quite happy and uplifting, which IS partially what it's about. But it's actually about the ups and downs/highs and lows of depression and anxiety, and sometimes being misunderstood because of it. It's about the struggle or search for that happier feeling when you're low I guess.

The accompanying video, which you've teased on social media, really complements the song. Was it the necessity of lockdown that drove it in that direction, or was it something that was always planned for this single?

Originally I had a pretty crazy idea for the video which was based around flying saucers (me being in one), outer space, crash landing on the moon, moon people, stop motion animation... the list of grand ideas goes on!

Then the pandemic hit and like everyone else I was stuck at home wondering what to do with unfinished plans. Now my flat mate is NOT a photographer/videographer, but he does have a good eye (and I have an old Canon camera), and I saw a really sweet, short clip that Ariana Grande did for Vogue, so we thought we'd try and make something similar. The obvious thing to base it around was just being stuck in the house, bored, being happy, being sad, playing guitar, doing jigsaws.. FLIPPING PANCAKES (which I did for the first time in the video and NAILED - thank you...).

Basically just capturing all the stuff that everyone was doing at home during that first couple of weeks of lockdown when it seemed completely alien. Honestly I'm really proud of what we achieved, cos it is completely DIY by total amateurs, but it's actually pretty good! Maybe I'll get a chance to make the outer space one some day!

You've played a few new songs online (This Feeling, Uppercut, Motel) this year.  Is Something Good the start of an EP or album campaign - or are these for future recording sessions?

I've pretty much written a whole album now (probably need one more track - which I've been working on the same day as doing this very interview). The songs you mentioned will all be featured on the record, and may even make it out as singles too. I'm still in the recording process with Mathieu and things are progressing, but a lot more slowly as we can't be in the same room together. We will hopefully have enough material finished to put singles out regularly until the album is ready.

How would you describe your music to someone who had never heard of you before?

Optimistic/pessimistc/dance floor/meditation music. Alt-pop..!?!?! (I dunno! Have a listen and you tell me?)