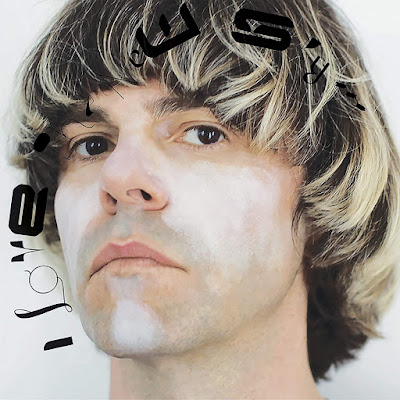 Tim Burgess releases his fifth solo album I Love The New Sky via Bella Union on Friday. Recorded over a year, it's Tim's first fully self-written album and features contributions from Grumbling Fur, Factory Floor and the Echo Collective string section. It's a record teeming with ideas, observations about life and friendship delivered with charm and an intuitive intelligence wrapped in a warm comforting musical blanket that reveals many complexities under its top layers as they push boundaries, drift off the beaten track yet remain focused on their destination.

It's rare for successful front men (and it's a peculiarly male trait) of bands to have a rewarding solo career to run alongside it. The natural reaction of the man on the street is to ignore it in favour of the band's established body of (usually early) work rather than focus on where the artist is now. Often the projects are results of collaborations outside of their normal working cycles and aren't entirely successful, artistic and more often artistic and commercially. The best of these are when the artist explores new areas of sound but retains familiar touch points to draw people in before revealing ideas that push the boundaries of what to expect. It's something Tim Burgess did brilliantly on the criminally underexposed Same Language, Different Worlds, his 2016 collaboration with Peter Gordon.

And whilst it's Tim's name above the door on this record, its ultimate success is in the way so much is present in the songs without them ever feeling overdone or strung-out. The original ideas were written on an acoustic guitar in Norfolk and then layers placed on top of them in the stages of the growth from those seeds, the recording of the songs, the addition of a string section here, uplifting backing and gospel vocals there. The result is a record that feels fresh, alive and vibrant, aware of its surroundings but confident and natural within its own skin.

Lead single Empathy For The Devil opens the album with a positive vibe, a totally unnecessary but pretty damn perfect woo hoo dropped in the first verse sets the tone for what's to come as multiple vocals clash yet never contradict as the song progresses. There's an euphoric sense to I Love The New Sky that you wouldn't expect from a well-travelled front man still making music.

It's an approach that continues into Sweetheart Mercury - led by a delightfully wonky keyboard lines and vocal lines that swirl around each other, making it feel effortlessly fresh and invigorating. Comme D'Habitude bucks the trend of songs employing a foreign language sounding trite and contrived, Tim's vocal taking centre stage with harmonies dancing around it as the music takes us on a twisting journey.

Sweet Old Sorry Me starts with a slow emphatic keyboard line that runs through the verses that look inwardly but the chorus has a bolt of optimism "I still believe in sweet old sorry me" as there's flashes of brass and guitars cutting through the other instruments as Tim declares "I'm just trying to remain calm in these lonely nights" that suggest a restlessness lurking beneath the surface.

Warhol Me is the type of track that wouldn't necessarily make the cut for a band album, but fits perfectly on a solo album, Tim reciting a list of cultural icons repeatedly over a tune that gets increasingly frantic as it progresses through its five and a half minutes. The lack of a traditional song structure risks it becoming a mess, but it never gets close to that even when it shrinks down to a minute of electronic trickery three quarters of the way through. It screams b-side from a time when b-sides were the most essential, intriguing and experimental elements of a band's work.

As if to immediately contradict the opening of Lucky Creatures is the most exultant moment of the album, the dramatic fanfare dropping down only slightly into a luxurious opulent track where the backing vocals return and harmonies return and twist themselves around the instrumentation. The rich production allows the natural beauty of the music to be heard in the manner it was intended and leaves you with a warm feeling as that intro comes back to usher the song out.

The Mall deals with finding a space where you can be yourself and happy, the key line "they say you can't win them all, but you can if you're at the mall" which cleverly could be interpreted differently as it sounds like "at them all." Like what's gone before, the song is a breath of fresh air fueled by Tim's breathy vocals, those harmonies and strings which give it a lush laid-back feel.

In a recent Independent interview Tim talked of the album as coming from "my ambition was to represent everything about me, everything I see, and to document a whole year." The line "I can count all of my friends on one hand, one of them lives in Japan" on the eponymous Timothy suggests that like all of us, doubts lie behind the confident persona we often put on in public, but focusing on the "those songs make us strong" can be the antidote. It's often forgotten how much music is an outlet and an escape for the musician as it is the listener.

Only Took A Year is based primarily around repetition of the song's title; one of I Love The New Sky's strongest personality traits is its refusal to adhere to conventional song structures and it's here (and Warhol Me) where it feels most in evidence and is most successful. The line "what's your favourite Cure LP, mine's Pornography, but it could be any one of three" is both ridiculously throwaway, like the first thought that came into his head, but also such a wonderful encapsulation of the free spirit that runs through this album and which makes it such a compelling listen that you go back to the start the minute it ends.

"I'll be the one who walks you through the darkness, I got this" and its uplifting tone that feels even more reassuring with each repeat of that line with backing vocals wrapping themselves around Tim's means I Got This is almost prophetic of the way Tim's social media activity has provided solace and a safe space for so many during the current lockdown. Again it hints at uncertainties "I'm through with counting the friends I can count upon" and up and downs "there is treasure beneath the dirt, there will be pleasure and hurt", but it makes a positive case to be true to yourself and those you trust and everything will work out.

Undertow takes us down a little, a sombre ballad that eschews much of the more experimental side of the music that's gone before, musing on existence - "just drifting out here in idle contemplation" - and almost resigned to fate - "it's too late for any kind of sorry, I'll see you in the undertow." Like life, I Love The New Sky represents not just highs but lows and both with an eloquence that the listener can relate to.

The album concludes with recent single Laurie. It's a song of comradeship that declares "the whole world is there to discover if you need adventure" whilst offering the unconditional support that has not been reciprocated by others earlier in the record as Tim declares "I'm standing here to protect you, none of these things will affect you." The song gives the album its title, layered with backing vocals and the important final line "all that's important is that you're still dreaming." It's a fitting parting shot for a record that seeks out positivity in a world that's often bereft of it.

I Love The New Sky succeeds because it feels natural and fun, a record made for the sake of making a record, to get ideas down and out into the world as the ultimate end of a creative process that springs from the need to remain active in the downtime major bands now have between albums as part of the release cycle. It's light of touch in place in places, but that just gives the songs space to breathe and blossom. It's not in your face as many of the best records of the past few years are, but with a couple of listens it's burrowed its way under your skin.

There's moments for the casual Charlatans fan to love, but the best bits are where Tim loosens the belt and moves away into areas of sound that the band format would make restrictive. Its release might be overshadowed by Tim's Twitter listening parties that have thrust him into the music lovers of the nation's conscience one more, but hopefully that will provide a gateway for many to discover an extraordinarily vibrant record that might otherwise have drifted under their radar.

Email ThisBlogThis!Share to TwitterShare to FacebookShare to Pinterest
Labels: The Charlatans, Tim Burgess