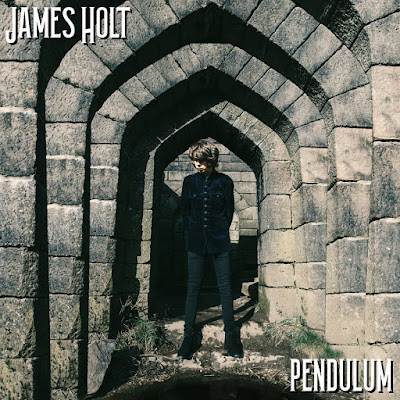 For some musicians, living in lockdown has seen them busier, more productive, more creative and increasingly active on social media, engaging with their fans in many different ways. We chatted to James Holt, who has been known and keenly followed by Even The Stars for some time now, and who was kind enough to speak to us ahead of the release of his new single Pendulum, which dropped today and was produced by James Skelly (The Coral) at Parr Street Studios, to find out what life has been like for him during these unprecedented times. Here, in a unique and in depth interview, we discovered much about the history and background to James’ musical journey thus far, as well as what’s he been up to since being forced to stay indoors, and cancel his gigs.

James told me he’s coping just fine, “I’ve just been burrowing myself in my music, writing and recording”. I’m quite lucky that I can record in my room, at home” James went on, but actually those that have seen any of James’ cover videos performing classics from Elton John to The Beatles, will know that his living room is often used as a music room too, which houses a beautiful grand piano. We discussed a bit of the background to James’ musical journey: “That piano wasn’t always mine, I was awarded it, it was a gift. It belonged to an elderly lady and has survived The Blitz. When she died, she left it to her family but no-one played music. The piano was put into a trust and they contacted a charity I was helping to ask if they knew anyone who would benefit from having the piano and so it was offered to me. The family kindly renovated the piano for me before it arrived, which I’m always very grateful for as it’s lovely to play”. Having seen James’ videos and all the instruments he owns and can play, it would be easy to make the assumption that he comes from a musical family, but this isn’t actually the case. “My brother plays a little, guitar mainly, but he hasn’t gone down the same route that I have, and my parents aren’t musical at all, it’s just me, really”.

The reality is, that James’ love of music and desire to play was recognised and nurtured from a young age. “We used to have an old upright piano in the house, and I loved playing that from being really young, so my parents got me piano lessons from around age five or six, and I started playing the guitar from the age of nine, and cello from age eleven or twelve. I remember thinking by the time I got to high school: music is what I want to do” James explained, and he found teaching himself other instruments such as drums a natural progression having studied those three instruments in such detail and also studying music to post-grad level (graduating with a MA in music composition at Salford University). However, having been classically trained in the piano, it was not until James was a teenager that he discovered bands such as The Beatles. “I wanted to be like them and write songs like them and I think that was the driving force that led me to this point” he furthered. Singing for James came much later than playing the piano, and he did not sing in public for the first time until he won a local song-writing competition in his hometown of Bolton as recently as seven years ago.

It seems fairly astonishing to think that in just seven years, James has progressed to writing and recording several EPs, has a regular band, has headlined several popular Northern Quarter gigs, including renowned venues such as The Deaf Institute and Night People and gained a loyal following of fans too. Furthermore, he has had accolades from renowned artists such as Brain Eno and has received a wealth of media coverage from TV, radio, and managed to win over presenters from Radio 6 and XS Manchester to name but a few. He also regularly in touch with some quite prolific record labels, which will surely benefit him in the future as he gains momentum in the way that he has done so far already.

During the current lockdown situation James has been busier than usual. “I’d never done a facebook or Instagram live gig, before lockdown and although streaming online doesn’t replace the gig
experience, I had singles ready to release and a gig booked, so I just wanted to carry on” James told me. And in carrying on, James has gained interest from new fans that he might not otherwise have come into contact with, whether that be people requesting songs on his live streams, or entering competitions such as the one he did recently on social media. It is clear that James is an artist with a wide range of skills. Not only is he a talented musician and songwriter, he has a range of video editing skills and is very active across all his social media platforms, promoting his music and engaging his audience with a wide range of content. Pretty impressive for a solo artist with no agent, management or the backing of a record label. He is able not just to share his own music, but to record his own unique covers of popular classics in which he plays every instrument himself.

Out today, is James’ new single Pendulum which he was keen to talk to me about. Of the style of his song-writing, he told me that likes to create a story with his songs, inspired by Bob Dylan. “This song is pretty much an anti-war song. I wrote a story out and I wanted a song that you could read from back to front or start in the middle and it would all make sense. It starts with just two chords that intertwine”. It’s certainly a very catchy and melodic tune that will appeal to James’ loyal fans on one level, but will surely attract new fans from it’s radio play. Every single that James has released has revealed not just a rare talent for song-writing, but is the kind of song that people want to hear. His trademark John Lennon inspired vocals reveal a beautiful tone to his voice, and his instrumentation is always rhythmic, catchy and wonderfully timed. Why not have a listen, here? You won’t regret becoming a fan of James Holt.