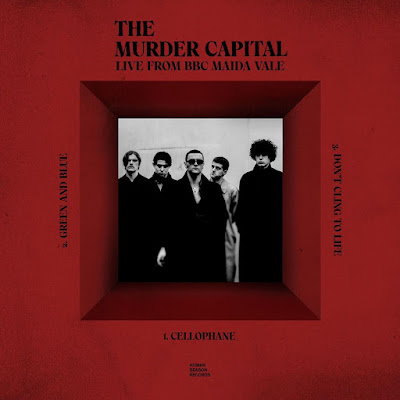 The Murder Capital today release their Live At Maida Vale EP recorded shortly before the lockdown at the legendary BBC Studios. As well as featuring Green And Blue and Don't Cling To Life from their debut album When I Have Fears, it also sees them cover FKA Twigs' Cellophane and they've released a video to accompany that track. Jason Wynne takes a closer listen.

Friday August 16th 2019 saw the release of the critically acclaimed debut album When I Have Fears by The Murder Capital. Alongside this success came festivals and sold-out shows across the UK and Europe as the bands profile and performance gained momentum further enhancing their reputation as a must-see, fearsome live band.

After a short and well deserved break at Christmas it wasn’t long before the band were back on the road again rampaging through Europe and the UK again wowing audiences with their incendiary live shows. 2020 was promising to be the year that this seemingly unstoppable juggernaut conquered the world, or America at least.

On Wednesday March 4th 2020, the night after The Murder Capital played at the Fontaines DC curated charity gig Rock Against Homelessness at the Olympia in Dublin, the Irish quintet were due to perform their final UK gig at the legendary 100 Club in London before embarking on their American adventure. That morning they played a short set of songs at the famous Maida Vale studios for the truly iconic Annie Mac. Little did we know that two months later the three tracks recorded would be released as an EP during a period of worldwide lockdown.

The band did make it to America but, after a couple of shows that received further critical acclaim, they were forced to postpone the remainder of the American tour as the Covid-19 crisis became a global pandemic. Suddenly the band, who we believe were on the cusp of something truly special, were forced to take stock and return home to Ireland and into isolation.

During that brief spell in America the band had decided they should release the aforementioned recordings and on Friday May 1st 2020, to the delight of their followers, they announced they would be releasing a three track EP ‘Live From BBC Maida Vale’ featuring live favourites Green And Blue and Don’t Cling To Life as well as an ambitious cover of the FKA Twigs classic Cellophane.

Maybe the whole thing can be seen as the end of an enthralling first phase as the band cope with life during and after lockdown. If this is the end of a chapter then it’s a brilliant way to end it as the trio of songs are spellbinding leaving the listener mesmerised and wanting more. A unique trait that the Murder Capital have mastered.

The Murder Capital’s cover version of the FKA Twigs' classic Cellophane is a joy to behold and highlights the extreme talent that this band possess. The way they take on such a heartbreaking and gut-wrenching song that tackles unrequited love and the intrusive scrutiny of a celebrity relationship from a shameful media and public (that Twigs had to endure) is both beautiful and haunting.

Cellophane was a song I fell in love with the moment I heard it so to hear that The Murder Capital were covering it surprised me at first but should it have really? They never take the easy option and, instead of doing a predictable cover version like so many bands do, they prefer to do something a little different just like they have previously when covering the Father John Misty song Hollywood Forever Cemetery Sings for a radio session. Out of their comfort zone is where they excel. It’s an exciting and emotional challenge but they’re always up for that. It’s this excitement that keeps the fire burning in their bellies as they are conscious they have to do the song justice being big fans of Twigs. They don’t fail as they strike a chord with the listener immediately.

You can sense the tragedy, the fragility and the utter despair of it all in James’ emotive voice as he pleads “And I don't want to have to share our love; I try, but I get overwhelmed”.

The rest of the band unleash their pain and sorrow through the power of their instruments as the music engulfs the song pulling us in all directions as we don’t know where or who to turn too. That feeling of detachment and despondency captured perfectly. It’s impossible not to feel distraught with it all. That empty, hollow feeling. Hurt and heartbroken to the point of no return James achingly cries out “They're hating, They're waiting, And hoping, I'm not enough”. Those last words painstakingly tragic and highlighting the powerful effect that music, and this song, in particular, can have on people. This is classical music at its finest and If you don’t find yourself moved by this exquisite song I’ll be amazed.

Green And Blue, the band’s second single release after Feeling Fades, never sounds the same twice live. Ever. This was initially written after discovering the work of photographer Francesca Woodman who sadly took her own life at the age of twenty two. The emotional connection was inspirational in the creation of this song and you can feel the poignancy and intensity with every play.

The Maida Vale version opens sounding like a scene from a horror movie – as Damien’s and Cathal’s guitars screech, scratch and gnaw away at you creating a wall of sound. For six and a half minutes we are treated to a blazing, epic noise. Gabriel's rumbling, pulsating, bruising bassline is complemented by Diarmuid’s tumbling toms and hard-hitting, intricate drumming – very much the heartbeat of the song – as the rhythm section takes control.

The urgency and immediacy of it all is matched by the strains and aches of James’ vocal as he tells us “I went into a state inside of thought and wandering mind”. The band counteracting each other, doing battle with each other. Coaxing and cajoling, it feels like a fight between the heart and mind as the vigorous shakes of the tambourine intensify before the unmistakeable battle cry of “I’ll correlate the blue, the green and blue for you” as James roars out in exultation before the outro leads us on a swirling, kaleidoscopic, helter-skelter of a journey before juddering to an immediate halt – battered and bruised.

Don’t Cling To Life (the third single off When I Have Fears) starts with James telling Cathal to “Take it away Pumpy” and that’s exactly what he does with an exhilarating explosion of sonic heaven from his guitar. It’s a song in celebration of death. Coping with grief is something that the band have had to experience an awful lot for men so young.

In typical fashion the band, in the face of adversity, turn a negative into a positive. This is something they band have always tried to instill on their audience and this performance is no different as James sings “failing this let’s dance and cry”. It sounds more brutal, yet beautiful, than ever.

Cathal and Damien, both frenetic in their delivery, continue to do battle driving forwards creating a wild cacophony of noise as Diarmuid (pummelling the drums harder than ever) and Gabriel (thundering away at the bass) meticulously keep it all together in a savage two and a half minutes. The song is enveloped in darkness and light throughout yet we are illuminated by the cry “we remember why we die” before concluding “there’s nothing on the other side, aaah there’s nothing…with any luck”.

One thing that has been proven from the release of this three track EP is that no matter how dark or unsettled you’re feeling through these extraordinarily insecure times there are people out there going through the same as you. The Murder Capital never fail to make you feel like it’s okay not to be okay. They encourage you to talk or to lend a shoulder to those in need. With these songs you feel there is an unbreakable cord of human connection between band and audience offering love, strength and hope to us all.

If this feels like the end of an exciting chapter in The Murder Capital story then it’s a rather fitting trio of songs that draws its conclusion. For now the band, like us, continue to isolate but they’re sharing ideas and still being creative as this unusual time seems to have made them even stronger, if possible, than ever before. The future isn’t what it used to be but one thing hasn’t changed – there’s a lot more to come from a band who are as important to their fans as we, the fans, are to them. This magnificent EP has undoubtedly proved that.