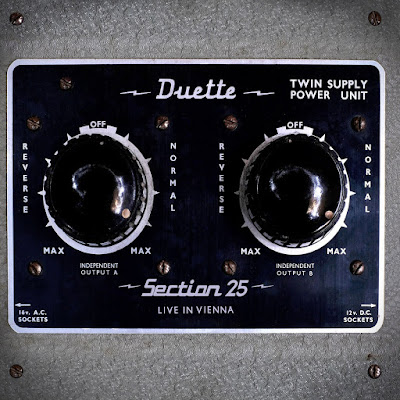 Ever evolving Section 25 follow up last year’s excellent Always Now 5 LP box set with an exciting new live album – Duette is their 16th full length record.  Now in their 42nd year, Section 25 concluded 2019 by announcing a new phase under the moniker Section 25 Industrial Unit, with the band stripped back to a core duo of founder Vin Cassidy and long-time member Steve Stringer. Embarking on a short run of shows, Vin and Steve recorded their Vienna show last October and the results are issued here. Stuart Ralston has a listen.

Duette draws heavily on their highly influential Factory Records debut album from 1981, Always Now.  Vin Cassidy said at the time "the two of us are working in an industrial and dance vein and inspired by the original band's back catalogue. We experiment with electronic and percussion/effects, non-rock guitar/keyboards.”

Opening with Be Brave, it remains true to the original yet with a twist and a driving electro dance beat. Be Brave is a strong set opener and sets the tone for the album; Section 25 still mean business. The 1980 Ian Curtis / Rob Gretton produced debut single Girls Don’t Count follows and runs to an impressive six and a half minutes without outstaying its welcome. This new interpretation is much more dance orientated than the punk heavy original. What’s clear is that stripping back to a duo hasn’t affected the energy that Section 25 create on stage. They still make an incredible sound and in truth, nothing is really stripped back.  Vin seems to relish his new role out front.

Hit, another cut from Always Now, and sampled by Kanye West, slows the pace down completely. Hit is dominated by synths and sequencers coupled with Vin’s haunting vocals. It’s almost reinvented, and sounds magnificent. The standout track on the album for me. Melt Close continues in the same vein – atmospheric, with some delicate guitar work from Steve.

The tempo accelerates on Beating Heart, their 1983 single. It's had a radical reworking for this outing – much harder and driven than my favoured Retrofit version I am used to playing (Retrofit is an essential Section 25 album from 2010, where the band revisited their back catalogue with Beth Cassidy featuring for the first time). The newish Don’t Have To Be Liked To Be Good is the only track drawn from last studio album, the excellent Elektra (2018), and is the most chilled out tune in the set.

Vin and Steve have saved the best for last though and the closing trio – Wretch, Dirty Disco and Looking From A Hilltop – are arguably three of the best tunes from their expansive back catalogue. Wretch, from 1982’s The Key of Dreams, draws on influences from Joy Division yet is much more dance orientated than their friends and label mates.  Looking From A Hilltop brings the set to a close and is one of those timeless tunes. It is often heralded as one of the best and most influential dance records and years ahead of its time. On this outing it has lost none of its power and this pulsating version has a harder edge whilst retaining the spirit of the original.

With the probability of us returning to a gig still a long, long way off, this is a wonderful live album to enjoy on a locked down evening. That Section 25 are still capable of producing such powerful live shows in their fifth decade is incredible. With the younger members of the Cassidy family – Beth, Jo and Mike busy pursuing other careers just now - we look forward to the next chapter of their remarkable story with Vin and Stephen at the helm, and keen to hit the road again once these strange times are over.

The album can be purchased here.