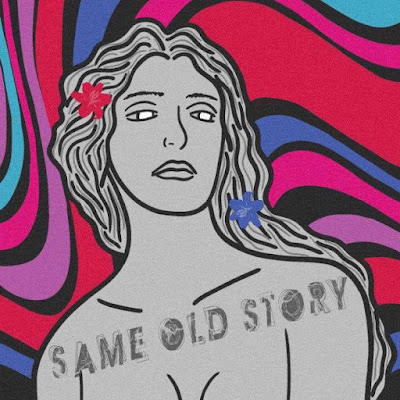 Same Old Story is the debut EP from Barnsley four-piece Machine. The follow-up to debut single Machine raw in its delivery and production, but shows an immense amount of potential for a band in its formative stages, having only formed in November 2019.

The EP's title track opens up proceedings and the only real false step Machine make is the opening spoken word part about knocking them up and batting them down. It doesn't fit with anything that follows, the guitars in the chorus sound like the best bedroom bedsit indie guitars in a long time as it tells the story of a girl who's stuck in a cyclical rut of life - "it's the same old story, it's on repeat, she's been through it so many times" - and the way Liv sings it captures, as she does throughout, the mood of the song.

I'm Out tells the story of being brave enough to walk away rather than chase a guy, despite it being the hardest thing to do. Guitars dance in the background, a great solo manages to find space in the two minutes twenty seconds the song announces it for, whilst Liv makes the song feel like she's telling her own story sat across the table in a bar rather than in a recording studio and it makes you invest in the song.

Hometown Blues is even shorter, just two minutes yet feels longer once the claustrophobic guitars and the quickfire lyrics about "there's nothing around here but boredom and beer" perfectly paint a picture of a rundown Northern town in the way many great artists have over the years, but doing it very much in their own style.

Lie By Omission is the only song to pass the three minute mark and shows another side to Machine. It takes the foot off the accelerator, demonstrates a more considered approach than the headrush of the previous three tracks, and allows Liv to show the range in her voice and the way she can use it to emphasize not just the words, but the emotions behind them.

Same Old Story is lo-fi, it sounds like a band that's seven months into their life as a band. I write that not as a criticism of the four songs here though; it simply shows us the growing pains of a band. What Same Old Story does though is allow us to hear the potential in flickers of guitars, the structuring of the songs, the fact the four songs don't sound like variants of each other, the richness and depth in Liv's voice, here unaltered by clever production tricks and better for it at this stage. And that's where Machine start to stand out from the crowd of bands that are still trying to ape their heroes at this point. There's a million young bands out there, but Machine might just have something.

Email ThisBlogThis!Share to TwitterShare to FacebookShare to Pinterest
Labels: Machine