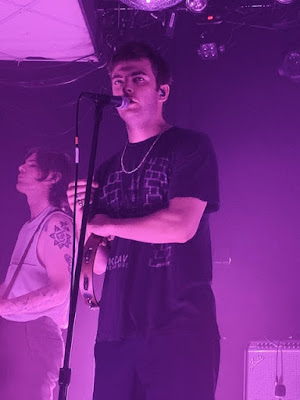 One year and one day after releasing A Hero’s Death we returned to the iconic Brudenell Social Club to witness a blistering eleven song set by Dublin rockers Fontaines D.C.

The frustration of a stop start return to the live scene was clearly evident throughout the set as the lads gave everything and more leaving nothing out there as the crowd fed off the angst and the energy. For some it was their first gig in 18 months yet the reaction of those both holding back observing from a distance and those letting go in the mosh pit suggested that people were elated to be back in their happy natural habitat with likeminded individuals.

You could be forgiven for thinking the album launch show would consist of songs from their latest album alone but the band performed a healthy mix of songs from both critically acclaimed albums to an adoring partisan crowd. 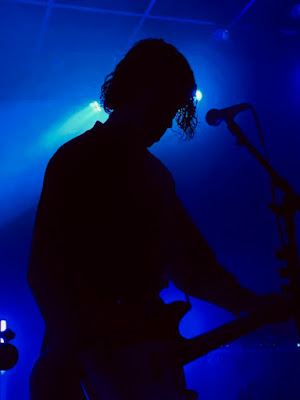 As the band swagger on stage to rapturous applause it’s clear this band have an even further level of confidence from the one that graced this stage with debut album Dogrel some two and a quarter years earlier.

Televised Mind is the opener and with the rumble of Conor Deegan III’s bass and Tom Coll’s assault on the drums opening proceedings it’s not long before the first mosh pit of the night forms. It feels good to be back. The boys are back in town and the agitated Grian Chatten’s delivery, full of purpose and intent, suggests we’re in for a rollercoaster ride.

The “what ya call it what you call it” mantra is still ringing in our ears from the opening track when the Dubliners explode into debut album track Television Screens.

Carlos O’Connell and Conor Curley, the cool cats and latest guitar heroes of a gig starved public, guide us down a rabbit hole of sublimity and potency as Grian’s voice caresses and soothes.

Two songs in and they’ve already left a trail of destruction in their wake. The trio of A Lucid Dream, You Said and I Don’t Belong from their latest album continue in the same vein.

A Lucid Dream is a head rush of a song that feels like you’re on a runaway train that is going to derail any second now. Grian is manic and sings with such venom in his voice spewing such vitriol emptying out every last drop of frustration against the backdrop of a band playing like they are possessed.

You Said takes it down a few notches and it’s positioned perfectly in the set that it acts in a manner just as the story itself is told in this song. “You said, you been on the brink, so slow down” purrs Chatten offering some comfort and solitude amidst the chaos around him.

The haunting and deeply personal I Don’t Belong emits positive and negative energies offering a stark reminder of how fragile life can be. I look around and see an audience feeling every word Grian says. Everyone in the room has suffered their own mental torture since the start of the pandemic but, just like tonight’s performance, there’s a resilience and a connection available between band and audience.

The double pronged sonic assault of Hurricane Laughter and Too Real takes us back to early Fontaines DC. The cacophonous din of Hurricane Laughter threatens to tear down the plaster on this quintessential building. It’s frenetic and it’s terrifying. Carlos is in the faces of those down the front losing himself while the pained face of Tom Coll is all down to the exertions of him pummelling those skins, resigned to defeat, such is the brutality of his playing. Messrs Deego and Curley, Conor and Conor, making it look so easy and carrying the baton further with Too Real. “Is it too real for ya?!” Grian screams. This very much feels like it’s real after such a long absence from rubbing shoulders with others desperate to feel the buzz of a live gig again. 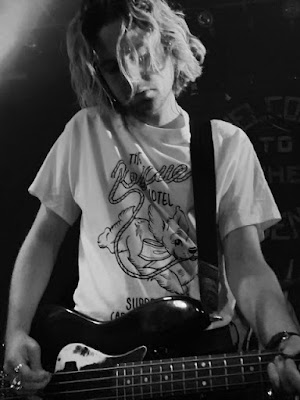 So we’re essentially here, albeit belatedly, for the album launch of A Hero’s Death and the anthemic title track delivers with gusto. Grian offers worldly advice on a variety of subjects “tell your mother that you love her” / “don’t sacrifice your life for your health” while declaring “life ain’t always empty” against a scenario of harmonious backing vocals from the rest of the band.

Grian coaxes the band into adding an extra song into the set and with little persuasion we’re treated to the delightful Dublin City Sky although Grian decides to cut it mid-song as it’s a bit too heavy on guitar (issues with one of Carlos’ other guitars) as his vocals are lost amidst the disquiet although there are many that sing along in unison oblivious to the on stage problem.

Heading to the end of the set the boys go out with a bang. Firstly with the epic Boys In The Better Land creating a sea of bodies that sway, swirl and float as those further back seize the moment to rush forward tsunami-like in appreciation of the punk rockers. Like a boxer going in for the knockout the quintet unleash a flurry of punches sonically and there’s no escape from the sheer brutality. Grian’s arm aloft in triumph while those with eyes fixed on the enigmatic frontman offer their approval.

With barely time to breathe the band close with I Was Not Born. A song of soaring hooks and melodies that engulfs the enthusiastic crowd one last time. It all feels a bit rockabilly to start, a foot stomping, guitar slapping, upbeat song that sees Grian telling us “I was not born, Into this world, To do another man's bidding”. He snarls, he gesticulates and he prowls the stage like a caged tiger one last time. The band, tighter and more huge sounding than ever, take us twisting and turning one last time until they come to a shuddering halt in true post-punk style.

One year after releasing the album the band finally got to play at one of their, and our, favourite venues and they didn’t disappoint and as we went our separate ways into the starry night it was safe to say that the band are in a very healthy place right now. Despite their worldwide success they haven’t changed one iota, remaining true to themselves and those around them. The momentum continues to be with the band, there’s a new album potentially not that far away and their live performance continues to win over new admirers and long time supporters.