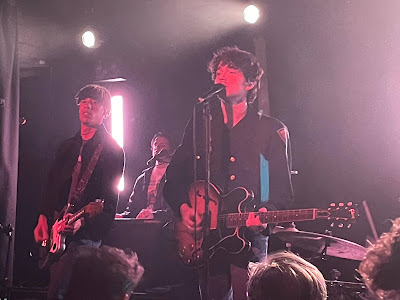 Inhaler completed the first week of their rescheduled launch shows with an intimate hour-long show at Colours in Hoxton in London to an excited crowd of hardcore fans ready to throw themselves fully into a celebration of the band's debut album It Won't Always Be Like This that reached number one in the UK charts.

Blondes open up the night and due to overrunning soundcheck they're restricted to a five-song set, but the Nottingham five-piece use the limited time to make a positive impression with a series of well-constructed songs that have a little more about them than the often generic nature of bands with similar set-ups. The likes of debut single Coming Of Age, which has racked up close to six million streams, new single Minimum Wage as well as Easy Days stand out through Will's warm emotional resonant vocals and the lift that comes from the backing vocals. They've already got plenty of admirers in Inhaler's fan base before they play a note and they have a lot more afterwards. 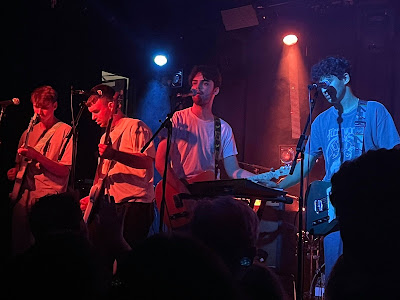 Inhaler have been on a steep upward trajectory since we first saw them in a support slot at the Night And Day in Manchester only a couple of years ago. They've now sold out the Kentish Town Forum, not too far from where we are in the renamed and revamped Hoxton Square Bar And Kitchen, and the Ritz in Manchester a couple of months ahead of time and shot to number one with their debut album It Won't Always Be Like This. Tonight feels like a real privilege to be in the same room as a band in such an ascendancy and the bouncing hordes know that this is the last time we're likely to be able to see the whites of their eyes. The energy coming from stage as Eli reaches out towards the front row and Robert directs the circle pits that form regularly suggests that they very much feel the same and want to live it before the energy comes from a different situation.

"We're only one song in, relax" Eli tells us at the end of the album's title track that opens the set - they play the album in full in order - yet he knows it's likely to fall on deaf ears because of the connection that they make at such close quarters and the pent-up energy and frustration at not being able to celebrate the album's release at the time with some of their biggest fans brings to the surface. They already look and sound like a band ready for halls even bigger than the ones they've sold out, let alone the intimacy of Colours. 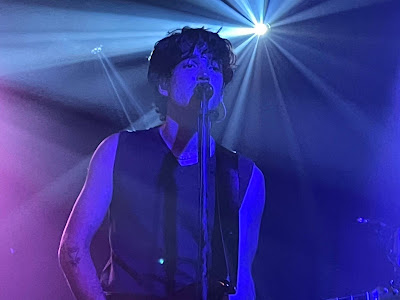 Other than the circles, the songs do the work in creating connections. Every word is sung back at them, but whilst some bands would take that as a sign to let the audience do their work for them, Inhaler don't engage in that lazy showmanship, the musician in them wants to deliver a performance that comes from them and is genuine rather than a staged show. They hold the audience through the quality of the songs, but also the sense that they're living these songs with their crowd. As the bodies throw themselves into the next big chorus it feels like a communal coming together. There's no visible egos on show, just a love of the music and performing together.

The singles don't necessary stand out either - although My Honest Face gets a second airing at the end just to make sure and We Have To Move On (which doesn't feature on the album but is played as the penultimate track of the evening) send people out of the door with a real buzz that we've missed for the last two years. Tracks like A Night On The Floor and Who's Your Money On are moshed to with the same energy and love as there's no room for favourites.

The obvious connections might have kicked open some doors for Inhaler, dealing with the elephant that's sitting in the corner that their detractors will be pointing at without hearing a note, but they don't stay open long if you've not got the songs and the live show to survive once you're in the room. Whilst the album is an impressive debut, they really come to life in a space full of people where they thrive off the energy coming from the crowd and send it back amplified and it feels so uplifting watching a crowd of young people responding to a band playing guitar music again. This felt like a really big band playing an intimate show, the sense of anticipation as the queues snaked outside and ran well past doors time and as the crew set up for them - and Inhaler delivered on all that expectation. The sky's the limit.