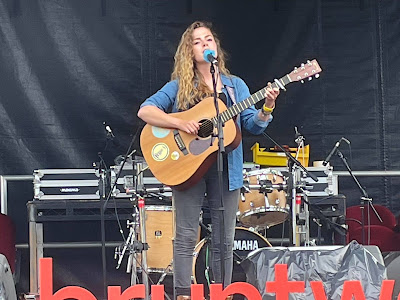 On a wet Manchester Saturday afternoon the rain clouds cleared for forty-five minutes as if in time for Katherine Priddy's long-awaited return to the city to perform at Manchester Folk Festival's takeover of Homeground. The set featured tracks from her early EP Wolf, her critically acclaimed debut album The Eternal Rocks Beneath as well as a number of new songs with delightful explanations of each song between them.

In a Twitter exchange ahead of the show we worked out it's nearly five years since Katherine last played Manchester, an intimate set in Gullivers Lounge as part of the sadly lost A Carefully Planned Festival in October 2016. Much has happened since then, the shy young woman has grown into a seasoned performer capable of holding an audience rapt in these personal yet relatable stories that base themselves on personal experiences with references to literary and mythological characters.

It's a real shame that the weather has limited the audience to no more a few dozen because music of this quality really does deserve a much wider audience, but the appreciation of the brave few hopefully transmits to Katherine. She starts with Indigo, the lead single from The Eternal Rocks Beneath, and Wolf, the lead track from her EP of the same name. The challenge of low volume in an outdoor setting is one that doesn't phase her and it allows us to hear the raw intimacy in both her words and her guitar playing.

Two songs that take stories of Greek mythology - Icarus and Eurydice - reveal an ability to tell her own stories through the metaphors created by others. She laughs she hadn't heard of Hadestown when she'd written the two songs that dig into the ripe pickings those stories give songwriters.

Letters From A Travelling Man is more directly personal, a letter of apology to her mother for spending her younger years with men who had no postcode to call home. Later on she plays an untitled new song, which she has written down as Song For Dad, which she wrote for him as a 60th birthday present when she was shielding with him during lockdown last year.

Before and after that, Katherine plays two new songs, joking we're being her guinea pigs as she explains her songwriting requires her to play songs live to bed them in and develop them. We're willing test cases though as both Northern Sunrise and Isle Of Eigg are gorgeous descriptive songs that show further development in her art from the already impressive heights of The Eternal Rocks Beneath - the former asking someone to "hold me in your orbit and let me spin" while the latter tells of a party weekend on a barren wet dark island off the coast of Scotland.

She finishes with The Old Tree, the final track off her Wolf EP and leaves us with the promise that although there's no Manchester date currently announced, there will be one soon as part of her touring plans for the rest of the year. With rave reviews coming in for The Eternal Rocks Beneath and it topping the Folk Album Chart six weeks after release, it's hoped more of the city will get to appreciate one of the country's finest singer-songwriters.