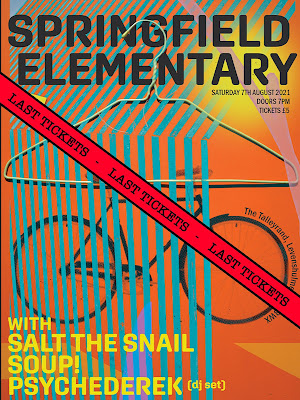 Saturday night and we venture out of the city centre to Levenshulme for a three-band bill of Springfield Elementary, Soup! and Salt The Snail, each providing their own take on punk, both complementing yet contrasting in their approaches and impressing each other's sets of fans in the process.

First of all, a word about the venue. The Talleyrand has been going for under three years, more than half of which it's been closed or under severe restrictions given its size and intimacy. They've fashioned a great small venue out the back of a warm friendly bar. It's a great out of the centre addition to Manchester's music scene, six minutes by train or quarter an hour or so on the 192 out of town. It's heartening to see a full room too given Manchester's tendency to sometimes turn its nose out at venturing too far from the Northern Quarter. 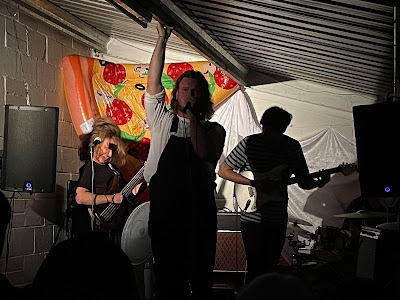 The first band of the night are Salt The Snail from Widnes. They're completely bonkers, mostly in a very good way. Half the set is selected by audience members from balls drawn from a Heron Foods bag for life, some of the songs last about thirty seconds, they give away a set of lateral flow tests as a prize, the singer spends more time trying to hang from the ceiling, lassoo members of the audience with his mic cable or standing on a set of steps in the middle of us than he does on stage. The purist might conclude they're shit, but they're nothing of the sort. Songs like Raisin Boy and Horseman, where the singer charges past us carrying someone over his shoulder, are full-on assaults on the senses and they finish on the brilliant Maaate. Not sure we, or they, could handle more than half an hour, given the singer tells us he's knackered after ten minutes, but they're exceptionally entertaining in their own strange way. 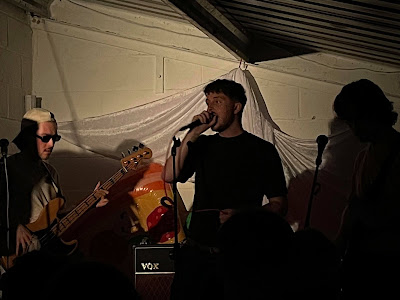 Soup! describe themselves, ironically we assume, as "another Manchester post-punk band, but they're certainly got enough to stand out in an increasingly clustered crowd. With a set of new songs, save for one, including recent single Shocked, they've certainly got more grooves going on than many of their contemporaries. It doesn't come as a surprise when they announce a cover and it's Psycho Killer by Talking Heads as they're a clear influence on their sound - and their best moments are when they're at their loosest and their front man adopts a half-sung half-spoken approach to his vocals. Their final song Wire and another that may be called Sorting Office are particular stand-outs in an impressive half-hour set. 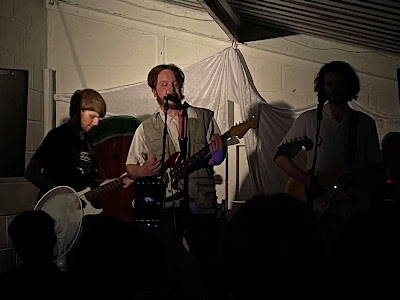 Like everyone else as we emerge from lockdown, Springfield Elementary tell us they've got a set of new songs to show us including their next single Moving that has the sort of simple chorus that you find yourself stuck with for hours after first hearing it. Describing themselves as acid-punk, they've got a dedicated bunch of fans down the front throwing themselves around to a set of songs that refuse to stand still, darting from one idea to the next yet they're not lacking in moments where their melodies take over and show a different side to their sound. Frontman Billy's excitable energetic performance is matched by that of his band and the crowd feed off that too, the energy in the room building noticeably as their set progresses.