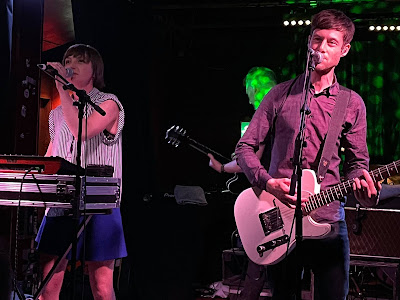 Seafever are what used to be called a supergroup, comprised of Iwan Gronow of Haven and Johnny Marr's band, Beth Cassidy from Section 25, New Order's Tom Chapman and Phil Cunningham with Elliot Barlow on drums. This was meant to be a celebration of the launch of their album Folding Lines, but the inevitable pressing plant delays have shifted that to October so this evening takes on the role of an intimate first ever gig preview of nine of the ten songs from the record.

The evening starts with a DJ set from Stephen Morris and Gillian Gilbert from New Order and after what feels like an age of tinkering with a bank of equipment the likes of which the Night And Day rarely sees for the new and touring bands that grace its stage, Seafever take to the stage and launch into debut single Crossed Wires. The band have spoken in interviews about having wanted to work together for a long time and it's immediately clear that this is a group of equals who've come together to make music for the love of it and not to sate egos. Throughout the nine songs you sense a real joy in the performance, little glances around at each other and a very intuitive flowing feel that runs through the whole set from start to finish. 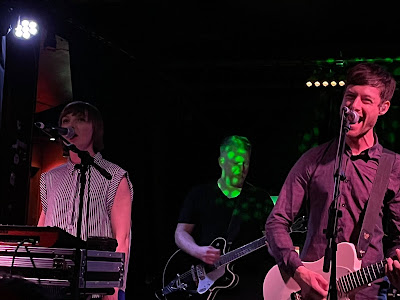 The songs are at their best when Iwan and Beth's vocals come together - it's rare for a band these days to make use of two vocalists who can lead and even less so when it's one male one female, yet the contrasts and opportunities that their differing styles and tones brings opens up so much potential in the sound whether it be them working in opposition or coming together and giving the songs a lift one vocalist can't do on their own. It works well with the guitar-heavy numbers that populate the early part of the set - Crossed Wires, Afterthought, Satellite and Beleagured Land - but comes into its own later in the set as Tom moves to synths and the songs take on a different life.

They save the best two songs for last. De Facto is the real stand-out, a calypso-infused song that really lifts the crowd with rhythms that keep flowing from the stage, stopping then turning round and coming right back. Huge beaming faces on stage as well as in the crowd ensue as it comes to its final conclusion. Built To Last, surely an oversight not being released as a single, finishes off the night in glorious fashion, as if all the very best elements of everything that's gone before came together in one magical formula and freed from any possible initial nervousness of a debut performance, even for such seasoned musicians, their natural instincts lead them.