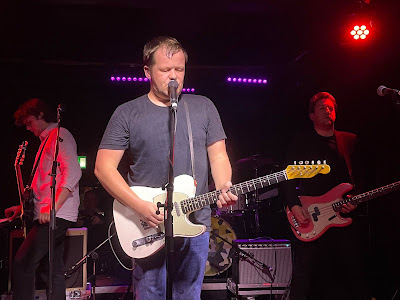 The first of a new series of BBC Introducing showcases at Manchester's Night And Day Cafe saw headliners and hometown heroes Ist Ist play their first non-distanced show in the city since June 2019 with an impressive supporting cast of Introducing favourites The Goa Express, Abbie Ozard and Julia Bardo in a sold-out venue of music lovers making their first excited tentative steps back out into the world of gigging again. 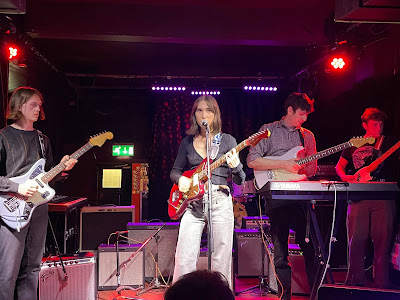 Julia Bardo opens up the evening with a six-song set of tracks taken from her forthcoming album Bauhaus L'Appartamento due out at the start of October. With a rich evocative voice that wraps itself effortlessly around some soft luxurious tunes she wins over a set of new admirers with a performance that radiates in its own modest understatement. It's OK (To Not Be OK) and No Feeling, two of the singles that precede the album's release, lift and soar gently, revealing a fragility of emotions that very few artists manage to convey at this tempo. However, it's the first and last song of the night, the album's opener The Most and a glorious final song Impossible, that captures a sense of hopeless romantic fatalism that many will relate to, that really stand out. Very much heart and soul music Julia Bardo will sneak up on your emotions and draw you in. 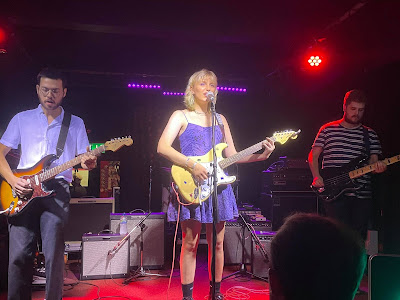 Abbie Ozard is introduced as the queen of lo-fi in the North, but if there's one minor criticism of a very impressive set of songs from the last minute stand in for (the presumably COVID-stricken) Swim School, it's that the backing tracks are often unnecessary and detract from the songs. Heartbreak Radio is a wonderfully upbeat song about wanting to write and sing about the very opposite emotions delivered with a voice that feels like it can move from sugar-sweet pop to something more emo as it does on Grow. Singles TV Kween, Crocodile Tears and True Romance impress in a set that is of consistent high quality, songs that create an instant connection, set the toes tapping and with a variety that holds the interest. 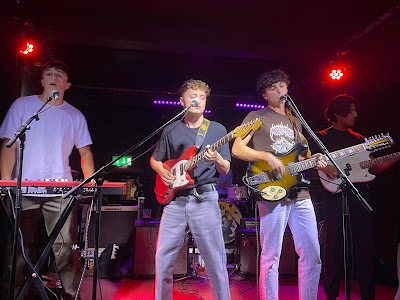 Back in the pre-lockdown days, The Goa Express had gained a reputation as one of the hardest gigging bands around with not a week passing without them seemingly supporting someone somewhere in the Northern Quarter. It's very clear that dedicated approach has paid off for them. Whilst the songs from those early days may have been replaced by newer sleekier and shinier models, their ability to pull you in with big robust hooklines and melodies remains stronger than ever and it's no surprise that they've drawn in some influential supporters on their journey so far.
They're at their best when they combine vocals, giving the songs lift and the vision to fill rooms bigger than this one and follow in the footsteps of some of their Calder Valley contemporaries. Second Time and The Day may be the songs that have drawn the plaudits so far, but new single Overpass, Be My Friend and Hit And Miss very much suggest that there's more to come from them as they continue to develop after their momentum live was stopped so abruptly.

No disrespect to the other bands on the bill, but this is a seriously intimate show for Ist Ist, stepping down from bigger venues to play their first non-socially distanced show for eighteen months in the place they played for the first time ever. They're not your traditional Introducing band either having grown organically over the past few years to the point where they reached the highest points of the physical album charts with their debut album Architecture last year. 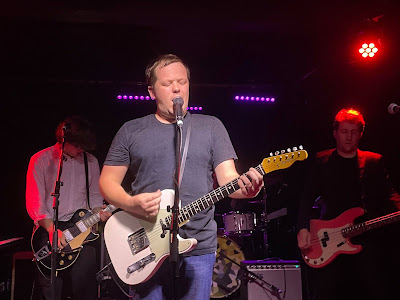 The first half of the set features that album heavily, its brooding bass-heavy opener Wolves shakes the walls of the Night And Day before they dispense of a trio of songs - early single You're Mine and album stand-outs Black and Discipline - that really set the pulses racing, steeped in elements of the city's musical history, but brought right up to date and delivered with a mix of clinical precision and passion wrought in Adam's vocals that seem to be stronger every time they play. Love Song, played at that first gig at breakneck speed, is slowed down to funereal pace yet feels even more impactful. Night's Arm, another survivor from that night, is driven by an unstoppable momentum and connection with the audience.

Album two is about to hit the ground running though, and the three appetisers they serve us tonight - Fat Cat Drown In Milk, Extreme Greed and It Stops Where It Starts - suggests Ist Ist's trajectory is going to continue upwards artistically, and if they can catch one of the rides denied to them by the industry with Architecture commercially too. Extreme Greed has the sort of soaring build and chorus that people would be filling buckets with if they were from the East Coast of America whilst It Stops Where It Starts has a sharp spiked edge to it that threatens to tear the room apart.  They finish with Slowly We Escape, a slow-builder into a raw explosion of sound that sees Andy's adrenalin pump so fast he almost topples from the front of the stage, bass in hand, as he moves forward to survey their kingdom. Ten songs and forty minutes these days feels like you've been short-changed with Ist Ist, the list of songs missing longer than the set itself, yet still the heart pumps faster, the pulses race quicker and everything feels for a moment like it's back to normal.

Their debut album Architecture is available to order from their store on vinyl as well as CD, cassette and download. Our review of the album can be found here.

Julia Bardo's website can be found here and she is on Facebook and Twitter. Bauhaus L'Appartamento is released on October 1 and can be preordered via Piccadilly Records. She plays Preston Ferret (July 22), Manchester Psych Fest (September 4), Leicester O2 Academy (18), Manchester Yes (26), Birmingham Hare And Hounds (October 6), Sheffield Sidney And Matilda (14), Nottingham Bodega (17) and Halifax Albany Arcade (22).