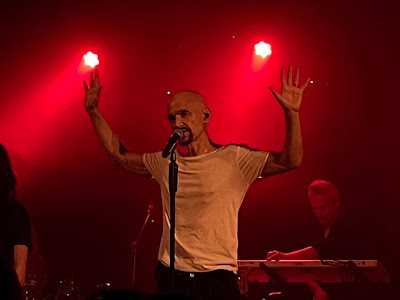 James played their first show since September 2019 in a celebratory packed Oxford O2 Academy, mixing tracks from their sixteenth studio album, the top three All The Colours Of You, with a series of their best known hit singles ahead of their late summer festival season.

Opening the evening was local teenager Torrin. With a confidence belying her fifteen years, she had the crowd eating out of the palm of her hand with an eight song set that featured five covers (The Stranglers, Nirvana, Johnny Cash, Dolly Parton and local heroes Radiohead), making tracks like Smells Like Teen Spirit and Creep her own with a very strong distinctive vocal and a complex accomplished guitar playing style. 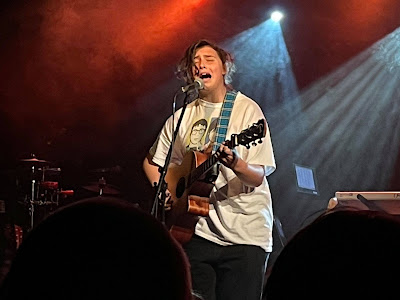 Those tracks went down best with the audience, although familiarity can be the only explanation for that because the real joy was within her own three original compositions that demonstrate a considerable talent at such a young age for crafting songs that capture human emotions perfectly. The song for her mum, who she lost a few years ago, Picture Frame was evocative and a fitting tribute, whilst forthcoming single Safe And Sound also explored human emotions with the music, exceptionally played with real intricacy and passion, accentuating the words. When she announces her next song will be her last a gentleman shouts “make it another original” and she obliges with Powerless, a recent composition, the best of the three. She leaves with the ringing of applause in her ears and if her confidence is anything to go by, we’ll be hearing a lot more of her in future.

This is James’ night though. Newly expanded to a nine-piece, the addition of Chloe Alper and Debbie Knox-Hewson opened up many new possibilities for the band on their 2018 / 2019 tour, both from a percussive point of view as well as vocally. Until now, it’s been one or the other, but they have now joined forces and their influence is writ large across the 2021 version of James, particularly on the exciting new material from the All The Colours Of You album.  As is James’ wont, and one of the key reasons for their phenomenal longetivity and quality, the new record is heavily featured in the set with seven of the eighteen songs being pulled from it. 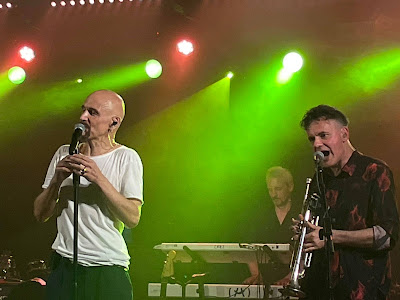 They start with three of them. Wherever It Takes Us is an uplifting start, five voices and some of the assembled audience choir lifting the song into its celebratory exultant chorus from the quick-fire storytelling of the verses. It was always going to be a difficult one to convert to the live environment, given the album was structured and built from jams rather than the band being in the studio and will no doubt evolve with time, but it’s an impressive first stab at it in front of a crowd. Beautiful Beaches is instant though, one of their finest songs ever, gloriously uplifting in the chorus despite the darker subject matter of the verses - the contrast between escaping fire and the relief and joy at reaching security and safety something that runs through many of their most connecting tracks. It’s dedicated to those around the world who are fleeing chaos which feels particularly apt. Isabella is a joyous romp, full of the fun element that runs through much of All The Colours Of You and a sign of the ever changing chameleon like nature of the band that keeps them fresh and so many people coming back.

Waltzing Along is a live staple and possibly as close to James by numbers as you’ll find, but its delirious impact on those parts of the crowd that aren’t familiar with the new work is impossible to dispute. Born Of Frustration is extended, taken down, brought back up and becomes an audience-driven singalong with hands raised clapping around the room much to the joy of the band who stand and watch in awe with beaming smiles across their faces. 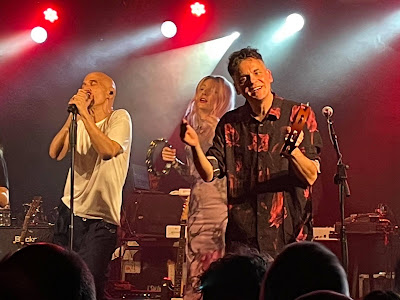 “It wouldn’t be a James gig, we need no excuse even if it’s been two years” Tim quips as All The Colours Of You grinds to a halt as things don’t gel on the first take. It’s something that James fans have almost come to expect though and it fires the band on to a ferocious attack on the racism that has fuelled populist politics around the world and still is. It’s followed by the contrast of Five-O where Saul’s reluctant violin playing really comes into its own and takes the song off into the stratosphere - a side of James that often gets neglected when they’re assessed by the media, but one which their dedicated fanbase adore. Just Like Fred Astaire is stripped down and given a racing beat that feels like the pulse quickening as love blossoms.

They move “from weddings to deaths” for Recover, which is dedicated to anyone who’s lost people during the COVID pandemic, which includes the band. Chloe starts with the song’s harmonies, a key feature in capturing a very raw emotion and sentiment from a viewpoint few have tackled with such personal experience. Moving On is a different beast, celebrating the passing of Tim’s mum as a rebirth, challenging the listener to do so too. The final song of the three in the “death section”, as Tim called it, is All The Colours Of You’s opening and key track Zero. They have to restart it as Tim sings “we’re all gonna miss our cue” as it stops in its tracks. That merely makes it even more passionate and connecting when they do - the audience joining in a the end when the song is taken down and Tim encourages us to all scream with him in order to let out the craziness, frustration, the pent-up anger and aggression that we’ve all felt over the past eighteen months. The band join in too and it feels like a real communal experience, the first in that period for many venturing out to their first gig in that time (and potentially explaining why the audience are muted at points as we readjust). Tim laughs at the end as he tells us it might be the only time we see it done like that as it took a lot out of his voice screaming so much. 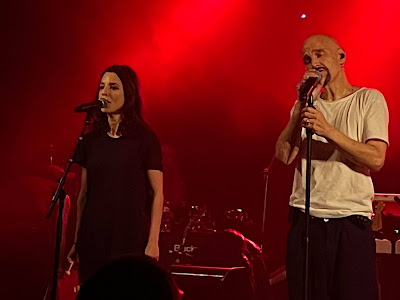 She’s A Star and Nothing But Love are real crowd-pleasers, the type of singalong hit that James are known for, but which also have deep personal connections dotted around the room. The latter is preceded by them singing happy birthday to a very persistent woman down the front and a comical moment with Jim trying to work out if another audience member was being genuine by claiming it was his birthday too, before telling him “we’re not going to sing it again” and telling the story of a messed-up wedding proposal in Blackburn where the wrong guy got on stage. They finish the main set with Come Home, Debbie bounding round the stage like a woman possessed, the band waving red piping round to enhance the visual effect and the audience losing themselves in one final act of the main set.

The encore starts with Sometimes and everyone bar Tim with a guitar in hand, and bar Mark in a line across the front of the stage. Adrian’s solo takes centre stage before the song stops, the band look to start the next song before the audience take it back off them and it finishes with drums, keys and trumpets coming in, Tim bouncing around, lost in the music before he orchestrates its end. There’s a bit of a consultation and they decide on a set list change to keep “the up” for longer and they run through a wonderfully off piste Sit Down. When played spontaneously like this, it has every bit of the magic it started life with, unshackled of the burden of expectation, and free to live its life as an era-defining anthem of coming together to overcome adversity. 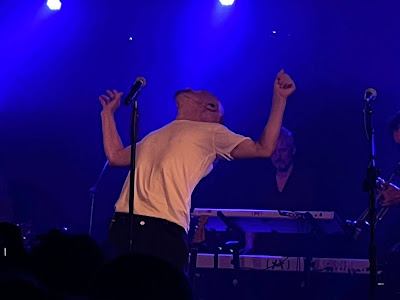 As he introduces Getting Myself Into, the final of the new songs, Tim jokes about the reaction to another new one, putting on the voice of a disgruntled early fan who’s favourite album is Stutter and who thinks they were shit once original drummer Gavan left. Jim recalls the time they headlined Reading and played most of Seven before its release and they got slated for it. But that love and trust in their new music is key to why they still exist, why they don’t kill each other through the monotony of repeat setlists of decade-old crowd-pleasers. Getting Myself Into is a fun, quirky number that highlights the playful side of All The Colours Of You.

They finish on a darker than normal, broody, moody Sound, notable for an extended outro that builds in pace, some trumpet sounds you wouldn’t believe were trumpet if you weren’t witnessing Andy channeling them through his box of distortion tricks as the song winds on its dozen-minute plus sonic journey. It’s a song that’s come to represent how James take their hits, reinvent and twist them and use them as the melting pot for new ideas that keeps them excited about what they’re doing as a means of ensuring their audience do too.

Tonight was a reminder of the power of live music. We laughed, we cried a few times, we felt the power of the drum feel like it was beating in our chest, we caught a glance with a stranger lost in the same emotion as us, we stood on someone’s foot (sorry, it was a few times), closed our eyes and completely lost ourselves in what was coming from the stage. There is no greater feeling than watching the greatest band in your world and we should never forget that and let anyone take it away from us.

James played Wherever It Takes Us, Beautiful Beaches, Isabella, Waltzing Along, Born Of Frustration, All The Colours Of You, Five-O, Just Like Fred Astaire, Recover, Moving On, Zero, She’s A Star, Nothing But Love, Come Home, Sometimes, Sit Down, Getting Myself Into and Sound.