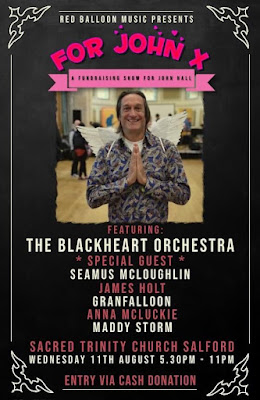 Wednesday night saw an intimate fundraising gig for The John Hall Stage foundation featuring many of John's favourite artists and friends in the inspiring surroundings of Salford's Sacred Trinity Church. Headlined by The Blackheart Orchestra's electronic folk and supported by five solo artists and a duo, the audience were treated to a different side of John's love and support of music in Manchester and further afield. 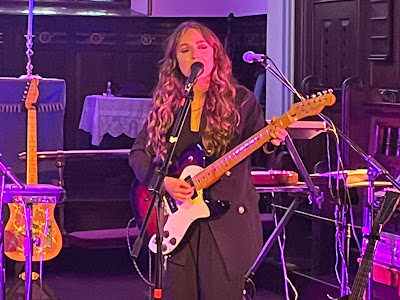 Maddy Storm opens up the evening with one of her oldest songs The Tempest, a song she tells us she hasn't played for a number of years. It's a reminder though of her show-stopping voice and the room falls into silent awe in these most perfect of surroundings for her last singles Dizzying Heights and Sleep Deprived. Surrealist Dinner Party, perhaps one of the best song titles ever, and a brand new song Seven Sundays hint at an even more expansive direction in the new songs she's writing before she finishes on a cover of Nick Drake's Pink Moon. The guitars, raw and sparse, provide a perfect contrast and enhance the dramatic tension that runs through Maddy's songs which make her one of the fascinating artists on the underground scene in Manchester over the past few years. 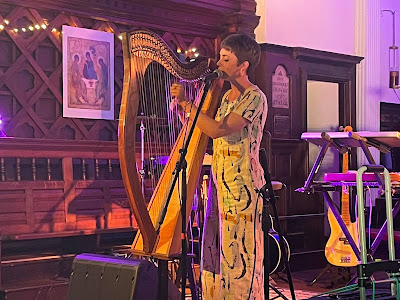 Next up is Anna McLuckie performing a solo set on harp, a beautiful instrument that is absolutely perfect for these hallowed surroundings and the "wholesome folk" with which she describes her opening song. Unlike her usual performances as part of a five piece band with guitars and drums, the harp provides an often sparse canvas on which gives Anna's rich evocative vocals all the space they need to colour in the patterns of the song with both words and harmonies as she does on Water The Plants and Red Sun taken from her Today, Everyday album and a new song called Are You Sure? She finishes with a stunning take on Joan Baez's take on the folk standard Silver Dagger that complements both instrument and voice perfectly. 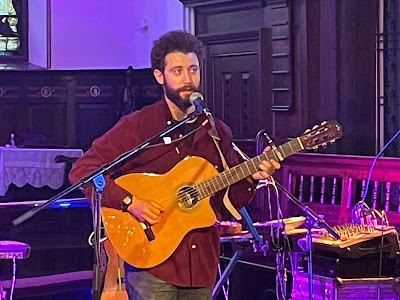 Granfalloon, aka Richard Lomax, tonight mixes songs from debut album RGB and forthcoming album Positive Songs. Like the rest of the bill, the room and the attentiveness of the crowd puts the quality of the songwriting into sharp focus. Opening track The Elephant tells of the relatable struggle of trying to do everything to meet expectations of others, including a section in German that nods to his family's saying around which the song is based, and newer songs The Luv Song and Working On Your Own very much use music as a way of dealing with life's struggles and challenges and it helping you to come out the other side. Warm and engaging the songs don't shout about themselves from the rooftops, but that makes them even more affecting. 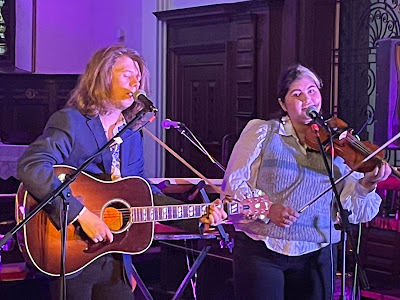 James Holt has been a long-term favourite of John, and ourselves, and over the course of the past few years he's built a set of wonderfully-crafted songs, steeped in the richest traditions of singer-songwriter yet with a very individual element. He's become a very gifted storyteller too, recounting the tales behind the likes of Come Out To Play, The Wedding and Alone Again, songs which feel intensely personal, like a comforting arm around the shoulder, a hug that tells you that things will be alright in the end. Stripped down to just an acoustic guitar augmented by Molly's violin and backing vocals, which provide the perfect foil to James, and the perfect acoustics of the building, we muse whether he's just too talented to be successful given the increased disposability of music these days. 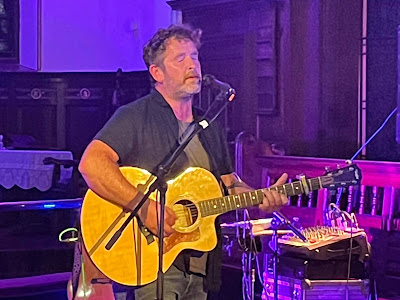 Seamus McLoughlin is a new name to us, yet like everyone else on the bill we're drawn in by the simple quality of the songwriting and the intensity of the guitar playing despite his own disarming modesty. Each song feels like it's had his entire life and soul poured into it, both in creation and the performance. I Can't Stop is a reflective honest musing on learning from the past and moving on while Show Me Your Smile has a sense of bruised real romantic notions to it. He recalls, like most of us, first meeting John outside a pub and shared conversations fueled by alcohol somewhere in the Northern Quarter before dedicating his final track Could I Be Your Lover to him. 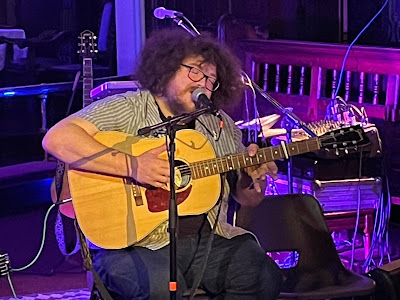 Jon Coley has been a familiar face around Manchester to us, but this somehow is the first time we've seen him play. A phenomenal guitarist, we're transfixed by his playing, managing to coax sounds out of an acoustic and electric guitar that don't quite seem possible. Very much a musician's musician, taking the mickey out his manager's frustration at him tuning my ear before even starting, he mixes covers including Dillinger's Cocaine Round My Brain and John Martin's Small Hours (a song he bonded with John over - and which he describes playing solo as trying to play "the Brandenburg Concerto with a flute" but still pulls off immaculately. His own songs Sympathy For Judas, about feeling sorry for those who don't deserve it, and A Love Like This, are steeped in the very finest traditions of songwriting and his own unique voice gives them a real intimate edge. He finishes on the piano at the back of the church with a cover of Stephen Kellogg's Prayers, one of favourite ever songs and artists. 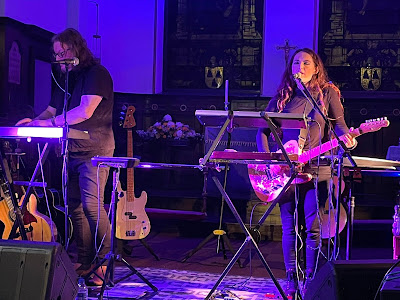 The Blackheart Orchestra are a band that have escaped our attention, although not John's, despite being years and albums into their career. Although just a duo, they make the sound of a dozen with Crissy's ethereal emotional vocals sat dead centre of an intoxicating mix of keyboards, guitars and layered vocals and harmonies. Influences in the sound range from the classical to high energy electronica, often within the same song to form an intoxicating fascinating and unique sound. The set takes heavily from last year's album Mesmeranto as well as a few new songs from their forthcoming record form the main part of the set - Violet, Drown Me Out and early single Sebastian being particular highlights of an impressive end to a wonderful evening.