Section 25 - Jams From The Bardo 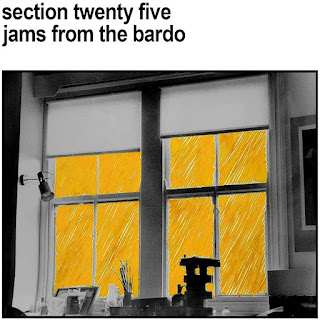 Fresh from their universally acclaimed Record Store Day reissue of their groundbreaking From The Hip album, Section 25 delve deep into their archives to deliver an incredible collection of improvisations and jams, recorded between 1978 and 1981.

Recorded at Cargo Studios in Manchester, this intriguing collection of jams allows us to hear Section 25 at their post-punk stage. Forming in 1977, initially as a duo, the Cassidy brothers (drummer Vincent and vocalist/bassist Larry) were initially joined on guitars by Phil Denton before being replaced by Paul Wiggin and it is this trio that feature here. By 1979 Section 25 had signed to Factory and were very much part of the Factory family – Ian Curtis and Bernard Sumner would both produce records for them. Their debut album Always Now, produced by Martin Hannett, was released in 1981.

Private Hell is a strong opener, giving a nod to Kraftwerk. Other tunes such as CEM and Form Is A Void demonstrate an incredibly tight and intuitive trio whilst In The Attic and Mirage are short extracts, mere seedlings. Mirage offers a glimpse of that electro sound that Section 25 would champion a few years later. On the other hand, extended jams are also presented here and at nine and a half minutes Rose Apple Read is the longest jam presented here. An instrumental, all 3 members again demonstrate that chemistry.

As Vin and Larry create a groove, Paul conjures up some futuristic guitar sounds. Machine is dominated by Larry's driving bass and for me is the standout track on this excellent collection. Another favourite is Up – the most euphoric tune on the album. This collection at times feels incredibly contemporary.

Section 25 are the Doctor Who of music – they've regenerated almost as many times as the legendary Time Lord. Following their post punk albums Always Now and The Key of Dreams, the band pioneered electronic dance music with their From The Hip album in 1984. More recent releases have included the live album Alfresco and Elektra recorded with Beth, Jo and Michael Cassidy. With these younger members of the Cassidy family now working on other projects, Section 25 are currently operating as a duo of Vin and long time band member Stephen Stringer, with new gigs and new material on the agenda. Jams From The Bardo may be over 40 years old, but the timing of this release perhaps points us in the direction of where Section 25 are heading next.