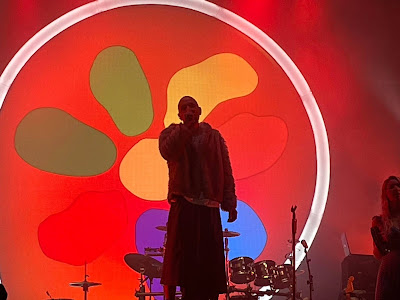 Set in the imposing shadow of the Ashton Memorial in Williamson Park, Lancaster's Highest Point Festival is one of the newer additions to the calendar, but already feels like an established well-organised and well-run festival.  James headline the first night of four for 2021 with a set that strikes a fantastic balance between their new material and old favourites with a few surprises and which is full of the spontaneous energy that symbolises their live experience even close to forty years into their career.

As they struggle to decide which of three choices on their setlist to play mid-set before settling on an electric rather than an acoustic version of She's A Star leaving Adrian battling vainly to get a cello heard amongst the guitars and drums, Tim Booth notes that this is who James are, indecisive and going with the flow, dicking around and why they're not as big as Oasis. And tonight demonstrates just why. It would have been easy for them to turn up, choose fourteen of their biggest hits (still leaving room for people to complain about their favourites being left out) and go through the motions and play them like they exist on record. It's a method that's served many of their contemporaries from one phase or another of their career very well in the past, and may well serve Oasis well at some point, but it wouldn't be James. And in fact, it wouldn't be easy for them, it'd be practically impossible. 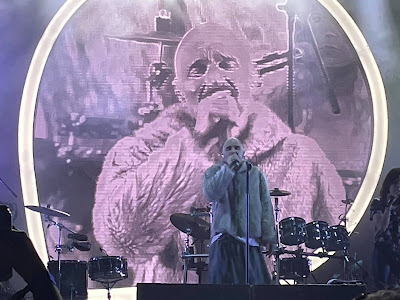 James want to challenge the audience as the one surefire way of challenging themselves. There's four tracks from the new album All The Colours Of You, but the first two tracks they revealed - the title track and Recover - are not amongst them. They start with Isabella, a song that Tim had noted was the one they didn't think they quite finished on the record, and live, his point feels vindicated as it's a big bold confident opener that grabs the crowd from the start. Beautiful Beaches, the lead single, is probably their strongest single since Moving On in terms of recognition, and here is stretched out with a magical drum duo between Debbie, who's lit up, and Dave in the background, that underlines the fact this isn't a band that just turns up and replicates the record. Wherever It Takes Us gives them the space to improvise, for Tim to play with the quick fire lyrics of the verses and the chorus the opportunity for us all to add our voices. The end of Zero, a song about COVID, has Tim challenging us to be "un-English" and to scream and let out the frustrations of the last eighteen months or so at the end of a song that demands we live for the moment, these sorts of moments, rather than accept that we won't be here forever. 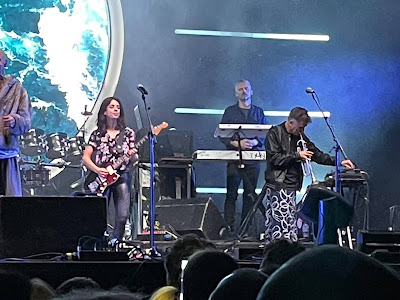 Walk Like You, the eight minute opener of La Petite Mort, finally feels like they've nailed it live. It's a true James journey song, more ideas in it than bands cram into albums, or careers in some point, and whilst it's a brave choice to throw it in second in the set, it works because it draws the audience in to the energy on stage, that is red-hot all night.  They finish the night with Stutter, a song that goes all the way back to 1982, even further than Tim remembers it, that has never appeared on a studio album and a gorgeous extra encore of Top Of The World. Tim laughs at the end of Stutter about the choice of it to finish when there could be so many other more predictable choices, but the wall of bright lights, cacophony of drums, Debbie using sticks to batter Chloe's guitar make it a perfect closing choice before the soothing antidote of Top Of The World.

There is of course still plenty of room for the big-hitters. Born Of Frustration and Come Home pile in after the Isabella / Walk Like You opening and there feels like a real sense of communal relief that we're actually in a field hearing these songs again. They sound revitalised, the band's relief as evident as ours despite Tim not being able to come down and join us, fresh and vibrant, and part of a world that we thought might be lost to us. She's A Star soars gracefully out of the indecision about how to play it whilst Sit Down is delivered straight down the line, which is now how it's best taken, the energy coming from the fact that we've all lived every word that the five thousand of us are singing as if it were written about each one of us. Getting Away With It (All Messed Up) finishes off the main set, a song that has emerged as a real crowd favourite and usurped others as an immovable part of the James experience. 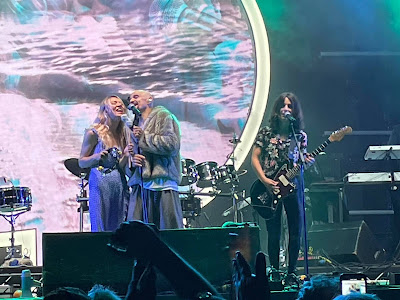 Sometimes and Sound open up the encore, the former with all of the band except Tim with guitars in hand until the crowd, with some provoking from the jack-in-a-box Debbie, take it away from the band and make it our own, whilst the latter allows them the freedom to improvise and take us on a journey for ten minutes where the route to our destination is like a mystery tour.

There's something really magical happening with the band at the moment. Debbie and Chloe together have reinvigorated them and created new sparks off which the rest of them feed, particularly Tim, who has lost the ability to come down and do that off the audience. It opens new avenues for the songs with two more agitators on stage and this is a band that are at their very best when responding to each other. Add to that the joy and relief of actually being able to do what they love the most and do the best and it genuinely feels like a new phase of the band's evolution is opening up before as they approach forty - where life begins if the old saying holds true.

James played Isabella, Walk Like You, Born Of Frustration, Come Home, Wherever It Takes Us, Zero, She's A Star, Beautiful Beaches, Sit Down, Getting Away With It (All Messed Up), Sometimes, Sound, Stutter and Top Of The World.